The outstanding defensive performance by the Dragons helped MSUM to earn a homecoming victory and they will now keep the Red River Valley Showdown Trophy for a third consecutive year. The MSUM football team defeated Minnesota Crookston 41-12 and securing their undefeated home record for the season.

Scheels Field was full of fans wearing MSUM jerseys and shirts to support the Dragons for the homecoming game. The crowd was full of energy and enthusiasm when the MSUM football team entered the field.

The Dragons won their first homecoming game since 2011 and are now 3-3 overall and 1-1 in the Northern Sun Intercollegiate Conference North Division. Phenomenal defensive strategy by MSUM held UMC to 140 yards of total offense while recording eight sacks and forcing three turnovers.

The Dragons scored the first touchdown with a smart play by Junior quarterback Demetrius Carr passing the ball 29 yards to junior receiver Damon Gibson, giving MSUM a 6-0 lead within the first three minutes of the game.

“What a play,” sophomore Muhammad Hasnain Khan said. “I have been coming to watch MSUM football games the last two years now and I have seen a big change in our team’s performance.” 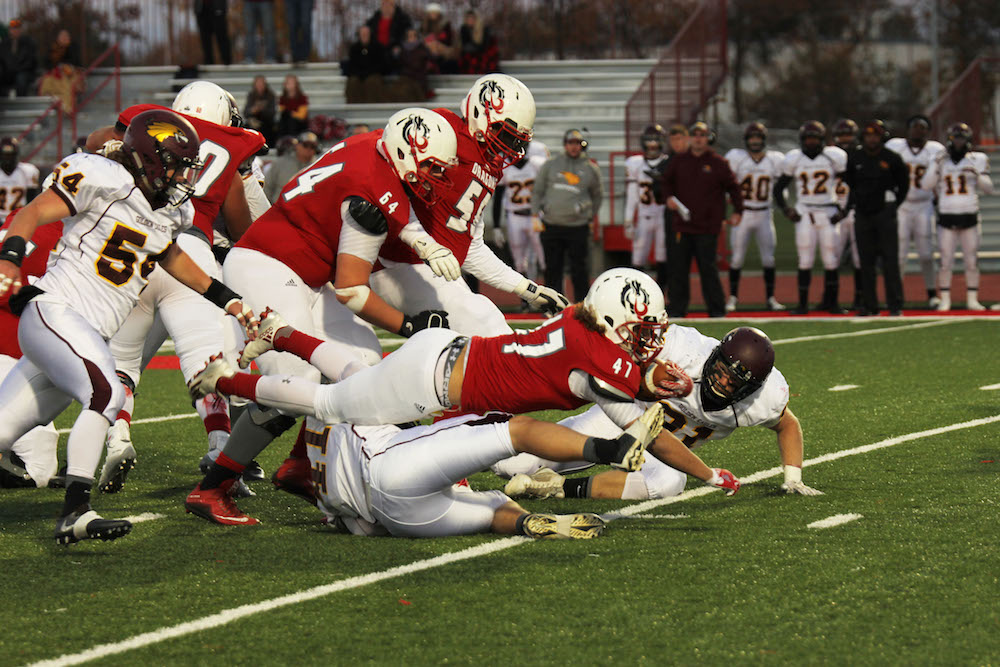 Crookston was kept out of the end zone by MSUM the whole game, scoring only field goals.

“The Dragons are still improving, but winning their first homecoming game in a few years is amazing,” Khan said. “I always bring my friends to watch and support our team because they are working hard and giving everything they have.”

Minnesota State University Moorhead is considered to be a small school. With an enrollment of approximately 6,000, it’s easy to know more students.

“I know who almost all the football players are,” Khan said. “There is one player I know because we started at MSUM the same semester. It’s always fun to see people whom you know play and do well,” Khan said.

Though this was the sixth game of the season and third home game, it was the first MSUM football game for freshman Keith Hasbargen.

“This is my first-ever MSUM game,” Hasbargen said. “It’s exciting; I am here because of homecoming and it’s a good way to support our local team.”

Volunteering for the King