Take Back the Night helped survivors of sexual assault find their voices Wednesday night. The event focused on ending the stigma of speaking out against sexual assault and supporting its victims.

“It’s scary to speak up, but we cannot look the other way,” Women’s Center coordinator Dana Bisignani said. She has been going to Take Back the Night events for almost 20 years.

Dating back to the 1970s, the event is now held worldwide. It originally was women-only, leading to some controversy, but MSUM’s Take Back the Night events are open to everyone.

It is well-known that one in four undergraduate women experience sexual assault during their time at college. However, there is less discussion surrounding the sexual assault that happens to men, LGBTQ+ people, and Native American women.

Nine percent of men, nearly 14 percent of gay and lesbian students and over 24 percent of transgender students experience sexual assault in college. One in three Native American women will be raped in their lifetime.

Attendees somberly listen to sexual assault survivors at Take Back the Night.

“Sexual violence affects all of us, and it’s up to all of us to stop it,” President Anne Blackhurst said during her opening speech.

Survivors of sexual assault talked about their experiences during the opening rally and during an open-mic session at the end of the night. Senior Rebecca Paul has attended every Take Back the Night since she has been here, and last year she shared a poem written about her experiences.

“I felt like it was really empowering,” Paul said. “I had a couple people come up and say that they were really happy that I shared that, and it felt really powerful because it was like, ‘I have a voice. I still exist. You can pretend that this didn’t happen, but it did.’”

Every year, new survivors come forward with their stories. Paul believes it is important that people keep speaking out about sexual assault.

“It just reminds you that you’re not alone and that you can find that support system, especially because there’s this stigma of silence around sexual violence,” Paul said. 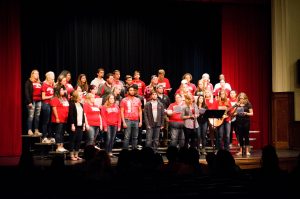 (AKA 4) The MSUM choir performs “Quiet” by MILCK and AG.

“I’m glad that I did it. It’s not the outcome I would have hoped for, but it still let him know that like, it was me saying, ‘You did this to me. I know it. You can deny it, but it still happened,’” Paul said. “It was just a form of me standing my ground and being like, ‘I’m not going to pretend this didn’t happen.’”

This year is also the 45th anniversary of Title IX, a federal law that prohibits sexual discrimination in educational programs and activities that receive federal funding. It is most known for its effect on women’s sports, but its applications are much broader.

Besides sports, Title IX guarantees equal opportunities and protections for academic and peer advising, access to scholarships and financial aid and resources for finding help after sexual assault.

“Personally, being a woman on a college campus can be scary nowadays. Fortunately, I know that my institution has the resources here that can help me if anything were to happen,” sophomore McKenna Togstad said during her speech on Title IX.

A swimmer and economics major, Togstad cites Title IX as the reason she can be a student athlete and pursue her academic interests.

Title IX is not the only legal requirement universities must follow. In 2015, the state of Minnesota passed a law in the Higher Education Bill requiring colleges to educate students about sexual assault within the first ten days of starting class. Now all incoming students complete the Personal Empowerment through Self-Awareness (PETSA) program.

“It kind of gives the nuts and bolts,” Title IX Coordinator Ashley Atteberry said. “It’s our starting point, but we need other education opportunities throughout the year.”

A new educational activity this year was In Their Shoes, a simulation program with scenarios of sexual violence. Student mentors participated in this activity during their training, and it was required for students in FYE classes.

“The entire way through, I just felt sick to my stomach, and I felt really stressed out, which is exactly what I think the person would be feeling going through that,” Paul said. “It’s really important to stress empathy. I think a lot of people lack the perspective of the person who’s going through it, so there’s a lot of times judgements put upon them, and also I think because people don’t understand what it’s like, they’re less likely to support victims.”

Paul was then able to watch her mentees, or SOCees, go through the same process.

“One of my SOCees in particular was so mad at this person. They’ve never been through that,” Paul said. “It builds compassion for victims and talking about how gradually people can get into these situations and how suddenly they’re stuck in them. It’s important for people to understand that.”

In the fall of 2015, MSUM joined the campaign It’s On Us, which focuses on how everyone can help prevent sexual assault.

“How do we end sexual violence? What are the things we can do right now, not waiting for others to do them, but what can we take on? We really had a desire to, ourselves, be called to action,” Atteberry explained.

Although Paul supports other campus efforts to address sexual assault, she is less enthusiastic about the It’s On Us campaign.

Blackhurst is a strong supporter of speaking out against sexual violence, but she believes there is still more work to do.

“I’m never more proud of our campus community than when we’re coming together about the issues we care about,” Blackhurst said. “It’s clear we’ve made progress in many, many areas of higher education, but I’m disappointed to say we have not made a change in the amount of sexual violence.”

Public Safety’s Annual Security and Fire Safety reports from 2009 to this year detail this sad fact: some form of sexual assault has occurred every year on campus. There does not appear to be a pattern; rather, the number of assaults spike randomly some years.

While everyone is still trying to find ways to decrease sexual assaults through PETSA and other educational tools, it’s important for survivors and their supporters to keep speaking out.

“I’ve been giving myself a voice back,” Paul said.