How do we move on?

Every year, over 44,000 Americans commit suicide; this year, one of them was a Dragon.

For many on this campus, it was an unexpected punch to the gut. Just as the academic year was starting, a whole world had ended. In the face of such tragedy, what is anyone expected to do? How do we move on, as individuals, and as a campus? And how do we help those who also find themselves struggling to get through a day, week, or month?

For such challenging questions, it seems impossible to have a catch-all answer. Different people will have different responses to personal tragedy, and it is important to tell their perspectives.

“I come from Nigeria, and talking about suicide is something you just don’t do,” Wellness Educator Tunmi Anwoju said. “So it’s like if you talk about it, and you tell your parents about it, most of them will just tell you, ‘Oh it’s the thing of the demon,’ and you just shun it right there.”

Anwoju’s experiences at MSUM showed her that mental health and suicide do not have to be silent topics—in fact, she joined the Wellness Educators program to share her story and make sure others did not go through what she did.

“When I came into this program, I saw, ‘Oh, it’s fine to talk about it,’” Anwoju said. “It makes sense, because this is a good thing—because I had a friend who died from suicide, so it’s like if she knew about this, or knew all of the options she had, or just talked about it, she probably (would) be here in this program.”

Anwoju is using her position as a student educator to show people that suicide and mental health problems are not just something talked about in lecture halls or PSA videos—they affect countless people on- and off-campus. She explained that hearing from students who students who have been through these issues makes it real for students in a way another presentation couldn’t.

“When you hear from people like that, you feel like, ‘Okay, (I) can meet someone who experienced something like that,’ and it’s just not something we say,” Anwoju said.

Still, having those honest conversations can be difficult for a topic as serious as suicide. Jenai DeNardo, another student Wellness Educator, said it can be hard for students to open up about the issue.

“I think the hard thing about suicide awareness especially is that suicide in general is a hard topic to talk about,” DeNardo said. “Having that conversation is the first step.”

Another complication for MSUM’s community is how university officials handle situations like this on a campus-wide scale. 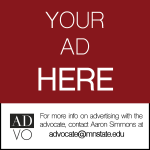 “I think the university needs to acknowledge what is happening,” senior and Wellness Educator Jessica Colby said. “Especially with the student that did pass away from suicide, it’s very hard for everyone. Half the campus doesn’t know.”

Colby went on to explain that it is probably difficult for the administration to balance the needs of the family with the needs of the students. However, she is confident there should be a greater response to these situations.

“Do you want it to happen again? You know they send out mass emails—just send out a mass email saying, ‘This has happened. We want to give you the resources to either help someone or get help.’ You know it’s not going to be where we just ignore it. We can’t just ignore things that are happening,” Colby said.

But how much is the university actually responsible for helping students with mental health issues?

“It’s to a point the university’s job, just to the extent that they should have the facilities, or something like that,” Anwoju said.

Once the resources are there, it is up to the student to get help when they need it. Part of the Wellness Educators’ role is to spread awareness of those services so students know who to contact.

Mental health issues are increasing across all communities, not just on the university front, so it is important to handle these difficult situations in a compassionate manner on all sides.

One organization seeing the increase in mental health needs is FirstLink. The nonprofit helps individuals in the Fargo-Moorhead community, as well as all of rural North Dakota, by taking calls, providing resources and hosting training sessions on mental health and suicide prevention awareness.

Ladbury Hrichena has heard from suicidal people in the community who were worried the police would be sent to their door if they called out for help; luckily, that is a highly unlikely situation.

“We do that very rarely, and we always try to work with that person on other options first,” Ladbury Hrichena said.

For those suffering through depression, anxiety or thoughts of suicide, the fear is only the first hurdle.

“I think some people can get to the point of feeling so hopeless that it’s not that they don’t want to feel better, they just don’t think anything would actually help them,” Ladbury Hrichena said.

That’s where programs like counseling and emergency hotlines come in, both of which are free on campus. And just as important, there are so many people willing to help. DeNardo explained that to her, helping even a single person is more than worth the effort.

Colby agreed, saying the point of the Wellness Educators is to get students to engage on health issues they wouldn’t otherwise talk about.

“What we’re trying to do is just really push these resources to people just so they know we have all this stuff,” Colby said “We have this for you, and it doesn’t cost extra money—we just want you to use it.”

Got your six: Anti-injustice is not anti-flag