As MSUM looks to cut costs, some faculty are being offered early retirement options.

The university is offering Broad Early Separation Incentives (BESI) to help reach their goal of balancing the 2018-2019 budget.

“One of the ways we’re looking at (balancing the budget) is by offering incentives to our faculty,” Vice President of Finance and Administration Jean Hollaar said. “If they then retire, their positions wouldn’t be replaced, which means we can reduce the budget by the cost of their salary and benefits.”

The incentive itself would equal four percent of their base salary per year of service up to 25 years. This money will go into the employee’s health and savings account.

“That’s a practice that is used a lot in higher education—we’re not the exception,” Faculty Association president and psychology professor Magdalene Chalikia said. “(The administration) cannot force anybody to take the offer and if they offer it, they have to offer it to everyone in the (department).”

The BESI is also not available to everyone. Only 27 faculty members are eligible for the offer, with a limit to one faculty member being accepted per roster except in university studies. Faculty must be at least 55 years old and have worked at MSUM for five years or longer to be considered eligible for the incentives. Additionally, only select rosters in departments were given the BESI offer. Chalikia said somewhere between 12 and 15 employees are expected to accept the option.

Rosters for eligible faculty include economics, political science, English, English and mass communications, arts and literature education, American multicultural studies, history, music, philosophy, studio art, art history, sociology, criminal justice and university studies. All of the rosters, with the exception of university studies, fall within the College of Humanities and Social Sciences and the College of Arts, Media, and Communication.

“The idea is maybe (to) just pick one from each of those programs. We’re not targeting programs,” Chalikia said. “We’re doing a selective attempt to reduce. It’s completely voluntary.”

However, MSUM is no stranger to early retirement options. Hollaar said the BESI was offered in 2009, 2010 and 2011. Faculty hired before 1996 who are 55-65 years old and have served at MSUM for 15 years or more also have a Contractual Early Separation Incentive.

Dr. Jody Mattern is a mass communications professor at MSUM. She is finishing her last semester of teaching on campus as part of a two-year phased retirement plan. While her separation differs from the BESI, she feels the incentives being offered are a good opportunity for other faculty.

“I think it’s great. I noticed people tend to stay in this job long after most people retire,” Mattern said. “And so, when you’ve been here that long, your salary keeps going up.”

There are still some concerns over the BESI. Library faculty member Larry Schwartz explained that some teachers in the humanities teach classes that are unique to their departments, and those classes would be lost if the school chooses not to hire staff to fill those positions. He also argued that it sends a questionable message about the future of the arts and humanities on campus.

In his response to the open forum for the academic master plan released in spring of 2016, Schwartz points out several areas he sees as lacking from the university’s mission.

“(The Academic Master Plan) does not recognize the centrality of liberal arts and humanities in the education of an engaged citizenry,” Schwartz wrote. “The language courses at MSUM have been victims of years of malign neglect; courses on literature in translation have succumbed to something called “practical” or “technical” writing; and the history department has suffered mightily at the whim of the previous administration.”

While she supports the BESI, Mattern understands why some staff might be concerned about it.

“That comes from a little bit of paranoia about what (the departments) have gone through in the last few years. We’ve had to twice kind of justify our existence and we had to say that ‘this is how many majors we have, this is how many faculty we have,’” Mattern said. “In the humanities, (the majors) don’t come out looking that great.” 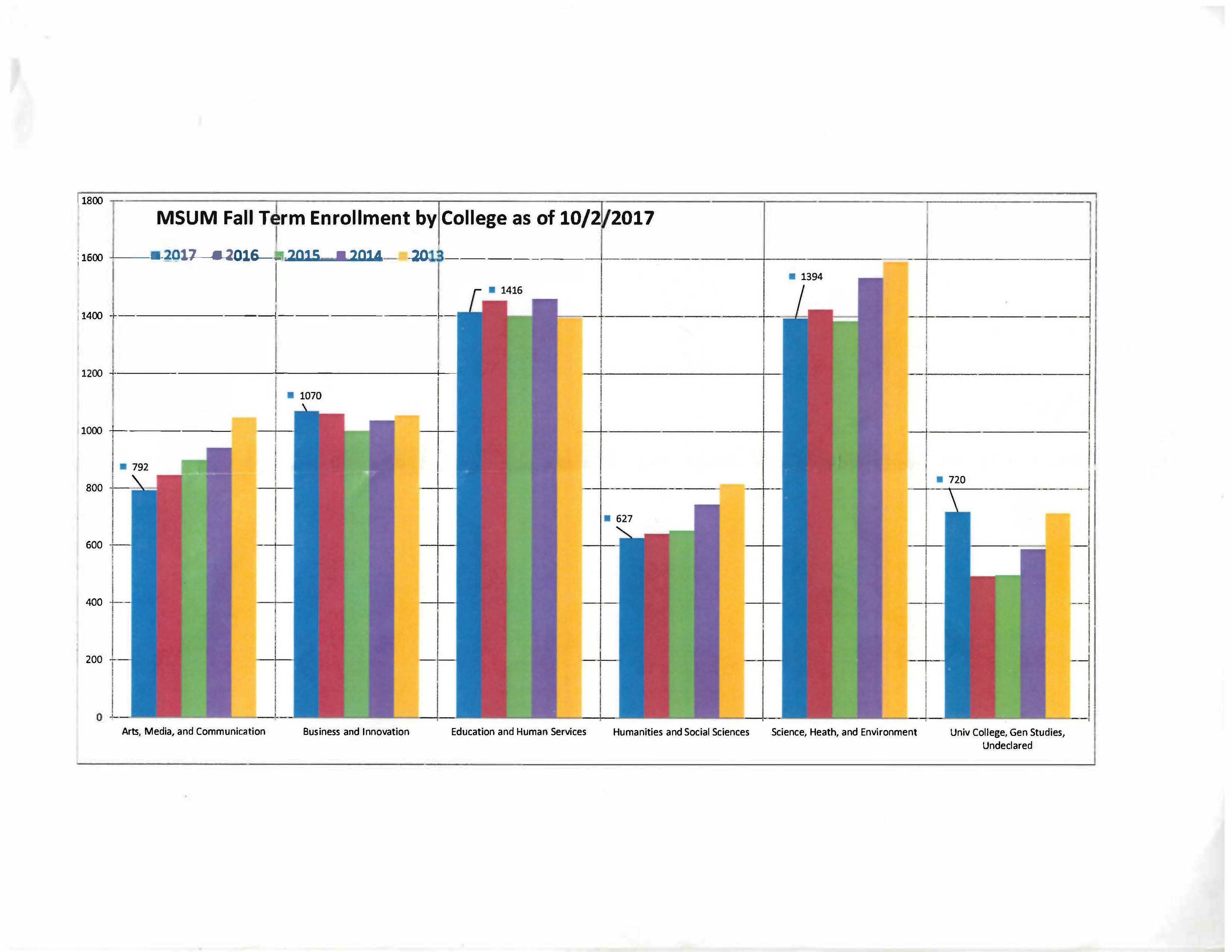 Chalikia believes enrollment is one of the factors that influenced the school’s decision to offer the BESI to those colleges.

“What we were told is that because of the reduction in student numbers, they need to have some decrease in the cost around economic affairs. We have in some areas too many faculty that are not justified based on the number of students on campus,” Chalikia said.

Hollaar said that faculty have up until the last week of November to respond to the offer. The number of faculty who chose to part with MSUM will influence how administration will move forward with trying to balance the budget, although layoffs will not be considered. The administration still hopes to cut $3.5 million in Academic Affairs spending for the next fiscal year.