The new “What’s up?” program at the MSUM Planetarium shows and explains heavenly bodies that can be seen in the sky each month. The first event of the series was held on Tuesday evening, Sep. 4.

Sara Schultz, the planetarium’s director, explained what the program covers.

“We’ll look at what constellations we can see this time of year, any celestial events that will be happening this month, and any other astronomical events that’ll be happening or have recently happened,” Schultz said. “Anything interesting that people might want to try to check out.”

Schultz has been the planetarium’s director for roughly four of the eight years she has been on staff at MSUM. She said this series was motivated by a desire to offer new programming that attracts different sections of the campus community, and find out what new kinds of events people would be interested in.

“What’s Up?” will run through the fall semester. Schultz said they will probably do the program again next semester because every month is going to be different.

The first show was hosted by Boston Heaford of Battle Lake, Minnesota, a physics major at MSUM. During the show, Heaford talked about the major constellations that are visible, including Andromeda, Pegasus and Pisces. He also talked about the planets that can be seen in the September sky. 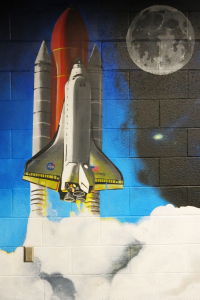 This month, the show features some new developments in the field of astronomy, including the Parker Solar Probe and STEVE lights.

The Parker Solar Probe launched last month and is headed for the sun, our first close encounter with the star. It will pass near Venus later in September, according to Schultz.

Juan Cabanela, Astronomy and Physics Professor at MSUM, said that the probe should pass close to the sun around mid-November.

“On its close passes it will be whipping through that interior… the really hot regions close to the sun,” Cabanela said.

STEVE lights are the other new development in astronomy featured in the show. Professor Cabanela explained that these lights were discovered by amateur astronomers. They are found near an aurora, but do not appear to have the same cause, and are colored white to hot pink instead of green to pink. He said that when they were first discovered, the astronomers didn’t know what they were, and humorously named the lights “Steve” after the hedge in the Dreamworks movie “Over the Hedge.”

Schultz encourages students to utilize the planetarium during their time at MSUM.

“If they haven’t experienced [the planetarium] they really should. It’s a unique asset we have on campus; we’re the only one in the Fargo/Moorhead area,” Schultz said. “This is something that… a lot of students don’t get the opportunity to experience… It’s unique to our campus. It’s an asset that we have…take advantage of it.”

The “What’s Up?” events will be held on the first Tuesday of every month at 6:30 p.m. Schultz said the planetarium is now free for students.