The door closes quickly, and warm air greets each person who enters the bar. It’s quiet and snowing outside. The hum of conversation buzzes in harmony with the music, drawing people in from the street.

It’s Dempsey’s jazz night in downtown Fargo, and four of MSUM’s own alumni are on the stage. 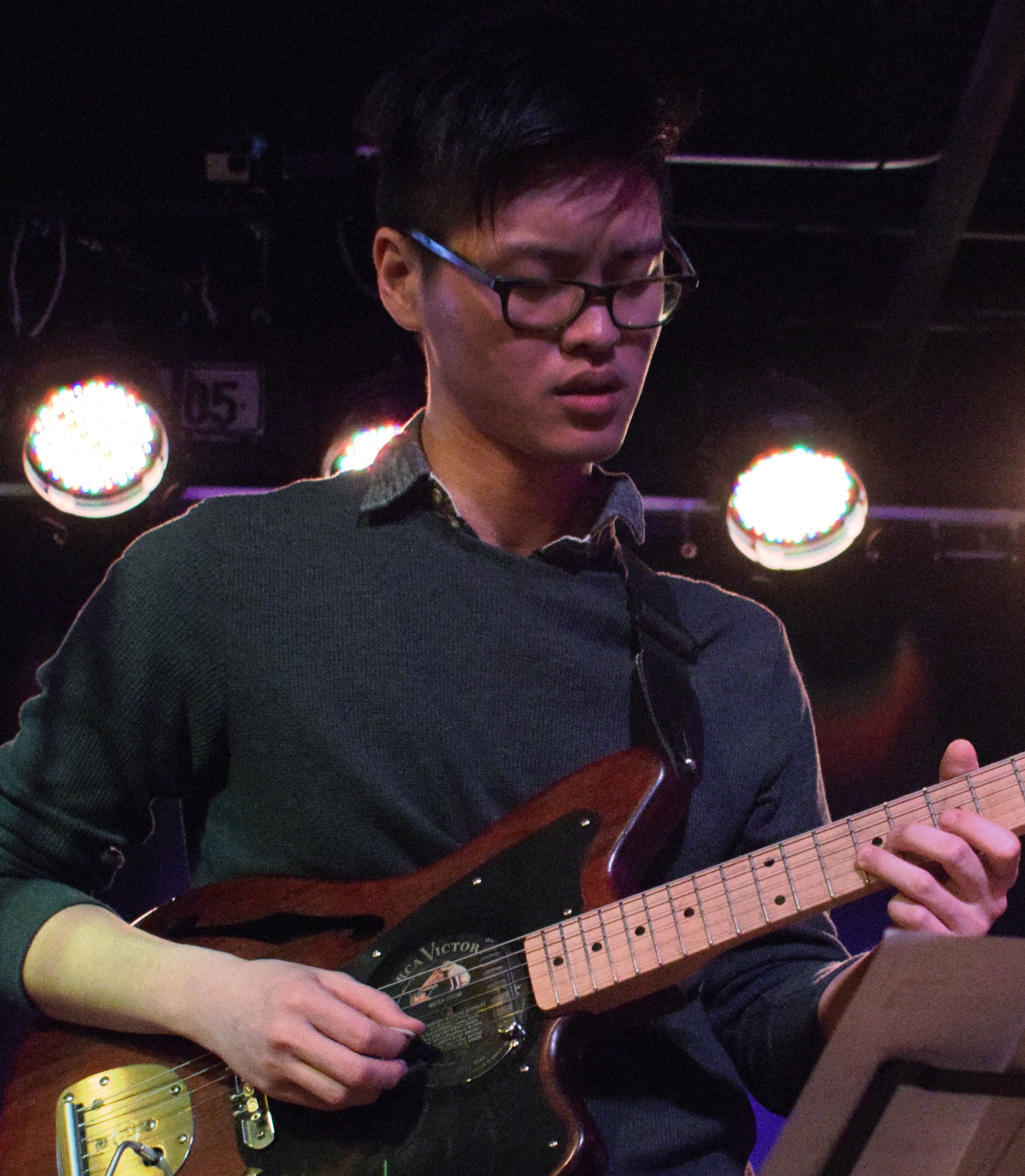 “Welcome to Dempsey’s, welcome to jazz night. Thank you all for coming. I know it’s not the nicest out, so thanks for choosing us over staying home … My name is Conor Lee and, for lack of a better name, this is the Conor Lee Quartet.”

Lee takes a step back, counts a few beats and plays “Otaku Blues,” a song that’s part of his recently released album, “Adapt.”

“Adapt” was officially released on Jan. 16 of this year. Lee describes the album as a jazz fusion.

There are 12 tracks in all with a guitar bass duet, four instrumental preludes and seven full band tracks.

His bandmates accompany him under the green lights on the bar stage.

It’s a Monday night and although the bar is not packed shoulder-to-shoulder, the band has a substantial audience that grows as the show goes on.

Lee has taken full advantage of social media and offers his album on a variety of platforms including Youtube , CD Baby and Amazon, as well as physical CD copies.

What year were you born? And where?
“I was born in 1993. I was born in Gwang Ju (South Korea). There’s two Gwang Jus; there’s a province near Seoul and there’s one in the southwestern part, and that’s where I was born.”

Lee, who grew up in Fergus Falls, Minnesota, graduated with a degree in jazz studies. Since graduating, he’s solidified his place in a growing music scene in the Fargo-Moorhead community.

Punk, metal, hip-hop and cover bands are everywhere, but Lee and his band offer something different with their skills in jazz.

Aside from regularly performing around town with various local artists, he teaches at Amped School of Music and at Flatland Guitars.

Whether on stage or talking privately, Lee is calm and soft-spoken. There is a sense of modesty and deliberation as he talks about himself and his achievements.

“Right now, I’m essentially doing what I like to do,” Lee said. “I get to perform, I get to write and I get to teach. It’s very fortunate that I get to do all three of those things.”

The task of creating his album “Adapt,” his “brainchild,” started at the beginning of 2018.

“I was very goal-oriented. I had a whole whiteboard with goals that I wanted to achieve. One of them was the album. I just felt like it was the right time,” Lee said.

How many roommates do you have?
“I have one.”
And it’s your girlfriend?
“Yup.”

Chris Schuster, a friend of Lee’s with home engineering equipment, approached Lee and offered to help. After heavy research, Lee accepted the offer.

Together, Lee, Schuster and the rest of the Quartet tore apart Schuster’s living room to perfect the album.

“It’s incredible,” Lee said. “I guess I’m biased, but it does not sound like a living room.”

Lee’s experience with music started in middle school, where generational differences between his parents and his friends influenced his musical tastes. The Beatles, The Who and Green Day were Lee’s favorite bands.

Lee’s bread and butter of music was power pop-driven, with catchy guitar riffs and the unapologetic use of three chords common in pop music. But later, Lee wanted to expand his musical scope.

Do you have any plants?
“Plants? Oh. Uhm. We have plants in our apartment but I would not claim ownership of them. I’m going to go with three. Actually, you know what? Maybe three at most. Maybe the other two died. One to three plants. I feel like that’s a good metaphor.

Jazz created a new world for him. Lee has been influenced by art since he was young, and he compares the variety of jazz music to a rainbow of colors.

“It’s kind of like when you have a kid and they’ve only been using the Crayola box with 12 crayons, but then he’s handed the 164 box and he kinda goes wild,” Lee said. “Before I was into music I really wanted to go to art school. I was into painting and drawing so color has always been a thing that’s interesting to me. So, I guess I learned how to color through sound instead.”

At Dempsey’s, the audience claps as Lee and his quartet flow into another piece from the album. People young and old move toward the stage and dance with smiles on their faces.

The quartet is tight-knit, as each member is an MSUM alumnus. Lee, Andrew Nelson, Evan Geiger and Mathew Tinjum went to school together and helped each other grow.

According to Lee and the other members, MSUM provided an atmosphere that promoted curiosity, learning and encouragement. Their friendships have lasted post graduation and the four of them continue to perform and create together.

After the show, Geiger reflected on the value of his experience with the quartet and the making of the album.

As the bass player, Geiger contributed musically to “Adapt,” but he also helped engineer it. After the recording sessions with Schuster, Geiger took on the task of mixing the music for the 12 songs together.

“It feels rad,” Geiger said.  “It took a while, debating on how loud the guitars are on measure 83 of track seven, going back and forth on little things for six or seven months. But now you can just pull it up on Spotify which is really weird, but cool.”

Now that his album is released, Lee’s focus is promotion and figure out fresh, creative goals.

Until that is decided, jazz fans can catch Lee and the Quartet performing in the Fargo-Moorhead community.