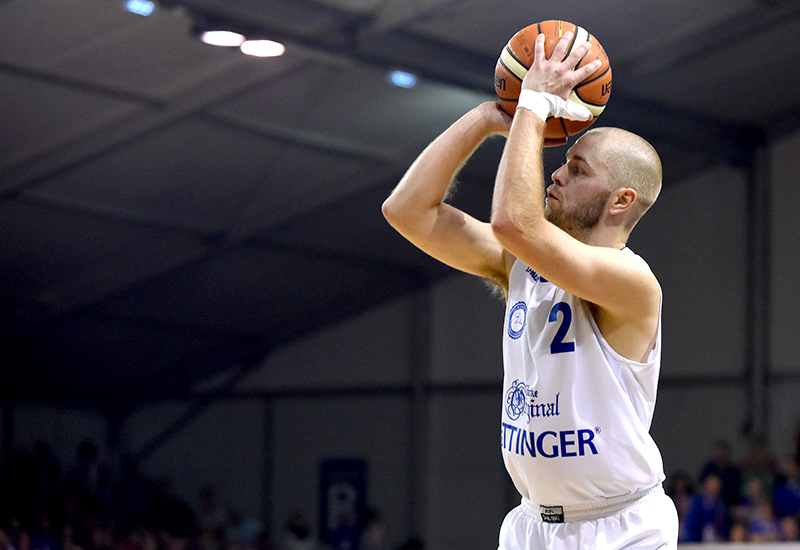 The Dragons’ all-time leader in three-pointers and assists always wanted to play professional basketball after college. Now, Jordan Riewer’s dream is a reality.

The point guard graduated with an impressive résumé last year after leading MSUM to an Elite Eight appearance in the NCAA Division II tournament — one of the most decorated seasons in team history.

Riewer signed with an agency out of Greece called Diamond Sports.  From there, he was able to land a one-year contract with the Oettinger Rockets, a team from Gotha, Germany.

“My agent did a lot of work for me to land the best possible job available coming from a Division II school,” Riewer said in a Facebook interview. “I couldn’t ask for a better place to be right now as a rookie playing in the German Pro A league here in Gotha, coming from MSUM.”

The German Pro A league is the second most elite out of six leagues in Germany, behind the Beko Basketball Bundesliga, which is commonly known as the Federal Basketball League. Both leagues are popular and boast talented players, many from top colleges in the United States.

“In the preseason, we even played teams with former NBA guys,” Riewer said. “The level of basketball is extremely competitive.”

The Staples, Minnesota native has found a role on his new team during his first six months in Germany, playing good minutes and even starting in some games.

“My two coaches are also Americans that played for a number of years here in Germany in the top league and won some championships, so I would be crazy not to learn and listen to them,” Riewer said. “I’ve learned so much and I’m just trying to be consistent and help us win anyway possible.”

The Oettinger Rockets are currently in fourth place out of 16 teams with a 13-6 record. Noting that the Rockets are one of two teams to beat the first place squad, Riewer said he believes the Rockets can win the Pro A.

Although he’s already reached professional status, Riewer’s goal is to eventually move up to the Beko Basketball Bundesliga.

“If you want to make it over here, you have to be honest with yourself and work on the things that you really need to work on,” Riewer said. “If not, someone else is going to take your job.”

Now that Riewer has established himself in the world of European basketball, he is returning to Moorhead this summer to workout with his trainer and old Dragon teammates — including current player Tanner Kretchman, a fellow shooting specialist.

“I think guarding him in practice everyday helped me, although I couldn’t stop him most of the time,” Kretchman said with a laugh. “One thing I learned quickly was how much work he puts into his craft as a basketball player.

“Looking at Jordan, he wasn’t the quickest, fastest, or most athletic player, but with his craft and moves he could get by anyone. That’s what I’ve tried to take from him.”

Riewer said MSUM will always be a part of his life. He follows his old team closely, keeping in contact with Kretchman as well as other teammates.

“I love waking up and looking at my phone to see the guys had won a tough game,” Riewer said. “It’s awesome to see how far the program has come in five years, and I don’t think it’s anywhere close to being done.”

With the level of talent this year, Riewer believes the Dragons can make another big run into the tournament.

“I think they have a great chance to expand and accomplish what we couldn’t quite do last year, but it definitely won’t be easy,” Riewer said. “Teams will be looking forward to playing the Dragons since we are the defending region champs.”