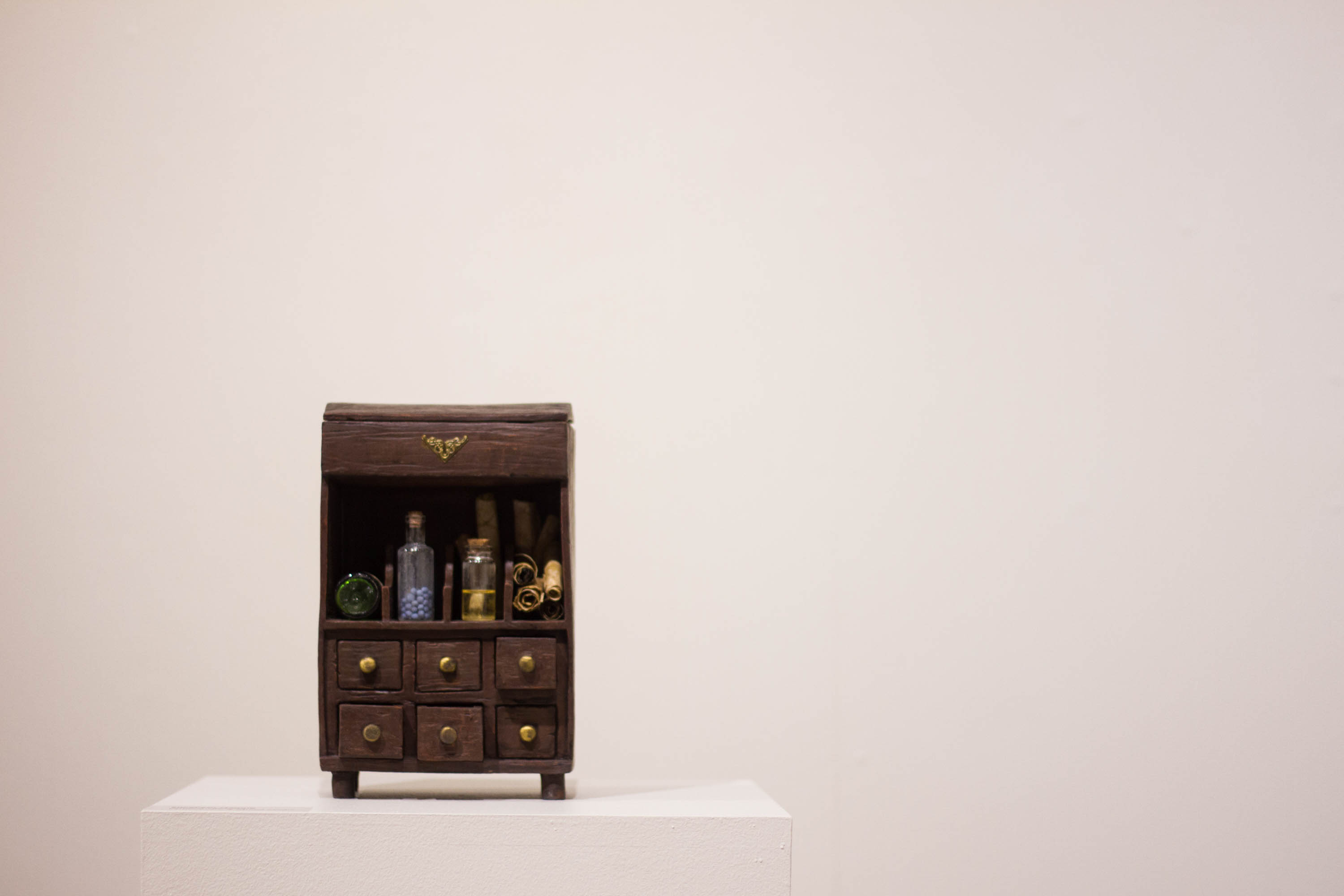 To get into the exhibition, students are required to pay a small fee for each submission, with up to two submissions per student. Participants needed the approval of professors within their discipline to ensure their pieces were gallery-ready. After submission, artwork to be displayed was juried by Chandra DeBuse, a Kansas City-based ceramic artist.

The show includes photography, ceramics, sculptures and other mediums. Among those selected were Olivia Bain, Shaniah Kaiser, Elizabeth Hannig and Benjamin Nelson. 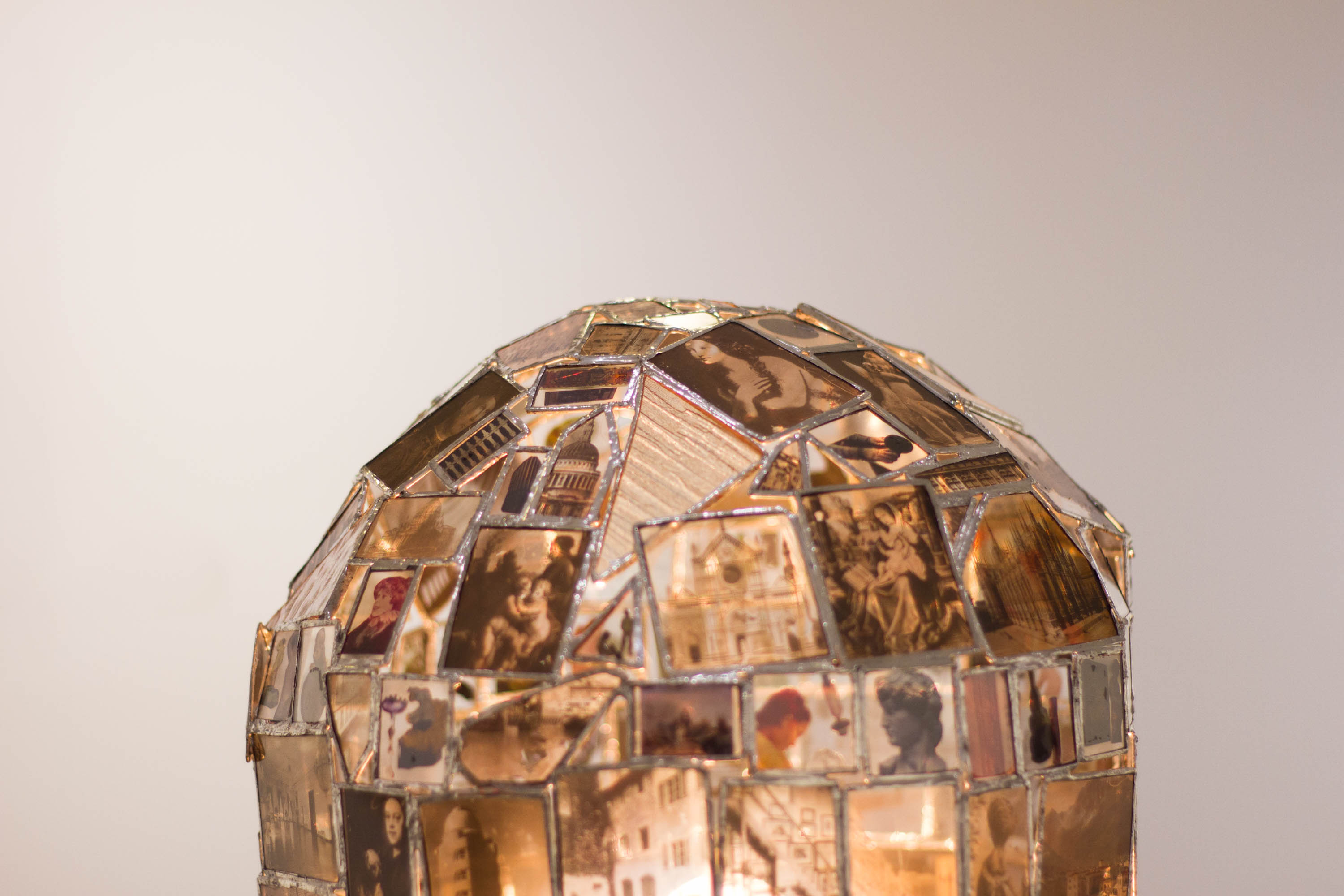 Bain, graduating this May with degrees in ceramics and sculpture, entered a sculpture composed of collaged images stained into glass. Bain’s sculpture, “The History of,” is comprised of full and partial images.

“I want the viewer to see my piece and put their own dialogue to the altered images I have put together (and to) take time with my piece, to inspect the vivid color and details of the images throughout,” Bain said.

Bain found inspiration in the materials and her curiosity in collage work. She spent hours rummaging through old images, finding parts of them she wanted to use, and putting them together to create her own statement. Spending well over 50 hours on the piece, Bain’s work paid off in the long run.

Kaiser, a junior double majoring in graphic design and art with an emphasis in photography, submitted two pieces for the exhibition. Her photographs, “Abstract Human Form” and “Human Form” were inspired by her studies in futurism and a work called “Dynamism of a Dog on a Leash,” in which the artist repeated the legs of a dog by painting a trail in order to show motion, energy and speed.

“When studying the human form, I wanted to create the same effect but, instead, by using digital photography,” she said.

Kaiser’s goal was to reflect on the radiating energy created through motion and bodily movements. The process of achieving these abstractions was experimental and took time to get right.

“Both of my photographs are single long exposures,” she said.  “I created these images using a long exposure of around 10 seconds in combination with a strobe light. It took a lot of experimentation to figure out just how fast the strobe light should flash in accordance with how long the shutter should stay open.  By using a strobe light, I was able to capture each movement sharply as well as the looming shadows that progress on the wall, as well.” 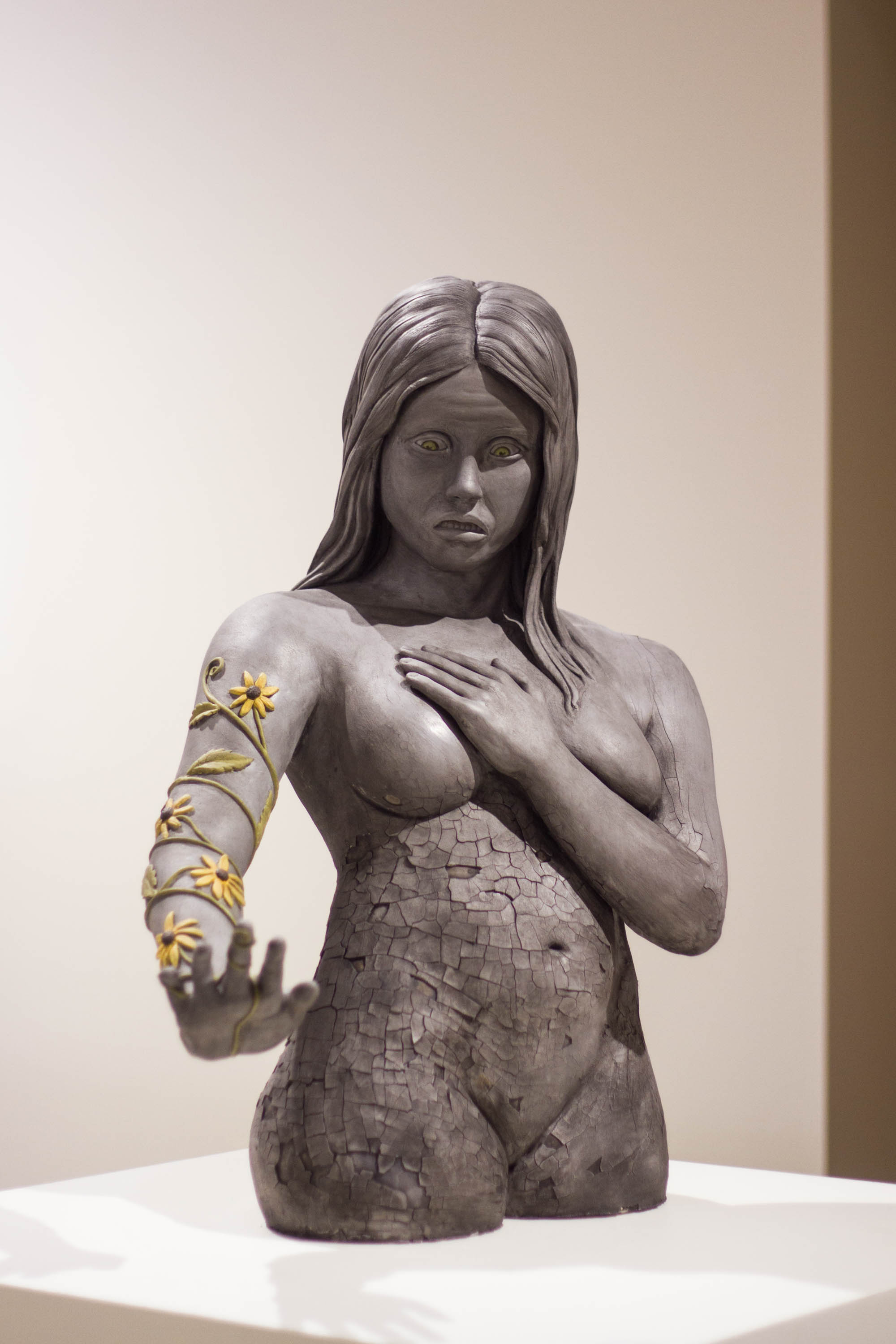 Another piece is Hannig’s “Eve,” made of earthenware with crackle slip. Hannig, having already earned a degree in religious studies and psychology, is finishing her first year studying studio art with an emphasis in ceramics.

Hannig worked on it extensively over the past three months. Clay, a very time-sensitive material, was a demanding medium.

“I had to learn about human anatomy as I went,” Hannig said. “Also, the specific clay body I used presented constant problems with cracking, and the arm fell off four different times throughout the process.”

“Eve” has a mostly grey complexion with subtle touches of color.

“I used grey to represent dry, lifeless earth, and I chose to use color sparingly on the flower vine and eyes in an attempt to draw the connection between life around us and the life within us,” Hannig said.

Nelson also had two submissions accepted into the exhibition. A sixth-year art major with an emphasis in printmaking, Nelson’s pieces are strikingly different, despite their similar color pallets and methods of screenprinting.

“Sharing stories and making memories are a constant in my work,” Nelson said. “The two works I made in the show have different meanings. ‘Saint Albans Windmill Copenhagen, Denmark’ was from a photograph of a windmill my mother took from her trip to Europe with my father and relatives in the summer of 2015. ‘Through the Vortex’ is a part of an ongoing series called ‘31 Days of Falling.’”

That series was inspired by a stream of ongoing nightmares Nelson had.

“These nightmares inspired me to draw in a more energetic style with dynamic and foreshortened positions,” he said.

Nelson’s pieces incorporate 3D aspects into his screenprints. He draws each layer with a marker on transparent sheets, then exposes the drawings onto a screen with a light table and creates a stencil. After exposure, the layer’s intended color is printed, and the process continues. Nelson has to be thoughtful about where and how the layers overlap in relation to 3D glasses.

“I’ve been developing this style of printing and layering to work with the 3D glasses for three years,” Nelson said. “I came across the glasses in 2011, and two years later, I found them in a drawing kit and started to experiment with them. The 3D glasses I use are a spectrum type that enhances the depth of the colors in my work. Warm colors seem to pop out more, and cool colors recede.”

According to Nelson, the student-juried show is the most important exhibition of the year. He said it’s a celebration of how far the School of Visual Arts has come in a year.

This year, there will be six cash prizes awarded for the juried pieces, which were funded by art faculty and from entry fees. Awards include the best-in-show award, the special talent award, the excellence award and three student awards. DeBuse decides all award winners except for the viewer’s choice award that is chosen by all who attend the exhibition. In addition to the cash prizes, a few honorable mentions will be awarded either gift certificates or art supplies. The awards will be presented during the exhibition’s reception on Feb. 18  4–6 p.m. The exhibition’s artwork is for sale, and prices are available at the Roland Dille Gallery reception desk.

Reaching Out for Help

Thank you, Advocate: My last day as the AdvoDad