The Dragons out-performed the Marauders in every aspect of the game. Led by All-NSIC center Isaac Sevlie, the Dragons out-rebounded the Marauders 48 to 30. MSUM shot 51 percent from the field and had severall players with double-digit point totals including Sevlie with 21, Tanner Kretchman with 13, Tyler Vaughen with 17 and Evan Holt with 12 points.

The Dragons will play Augustana in the NSIC championship at 5 p.m. March 1. The last time the men beat Augustana was Feb. 8, 2013, at home in a regular season matchup.

The women’s team finished arguably its most entertaining game of the season, but in the end, came up just short. The team fell to Augustana 79-74.

The Dragons trailed 22-8 in the first quarter. The team rallied back and only trailed the Vikings by four points at the half. The Dragons tied it up with seven minutes left in the third quarter. By the start of the fourth quarter, the women held a four point lead.

The game remained close as both teams traded free throws through most of the fourth quarter. Augustana reclaimed the lead in the game’s last 24 seconds, eventually beating MSUM.

The Dragons were led by senior forwards Heather Strese and Drew Sannes. Both scored 16 points in the losing effort. Junior guard Morgan Banasik and freshman guard Jacky Volkert added another 13 and 12 points respectively.

Though the women’s run for the NSIC championship ended with the loss, the Dragons could be selected to play in the NCAA tournament. The team will find out March 6 if its season will continue.

In a quarterfinal matchup, the men’s team earned a 98-82 victory Saturday over Upper Iowa in the NSIC tournament at the Sanford Pentagon.

The story of the game was the Dragons converting 40 out of 50 free throws, which was one shy of the school record set in 1963. MSUM shot 44 percent from beyond the arc and 45 percent from the field.

MSUM will face University of Mary (19-11) at noon Monday in the semifinals. 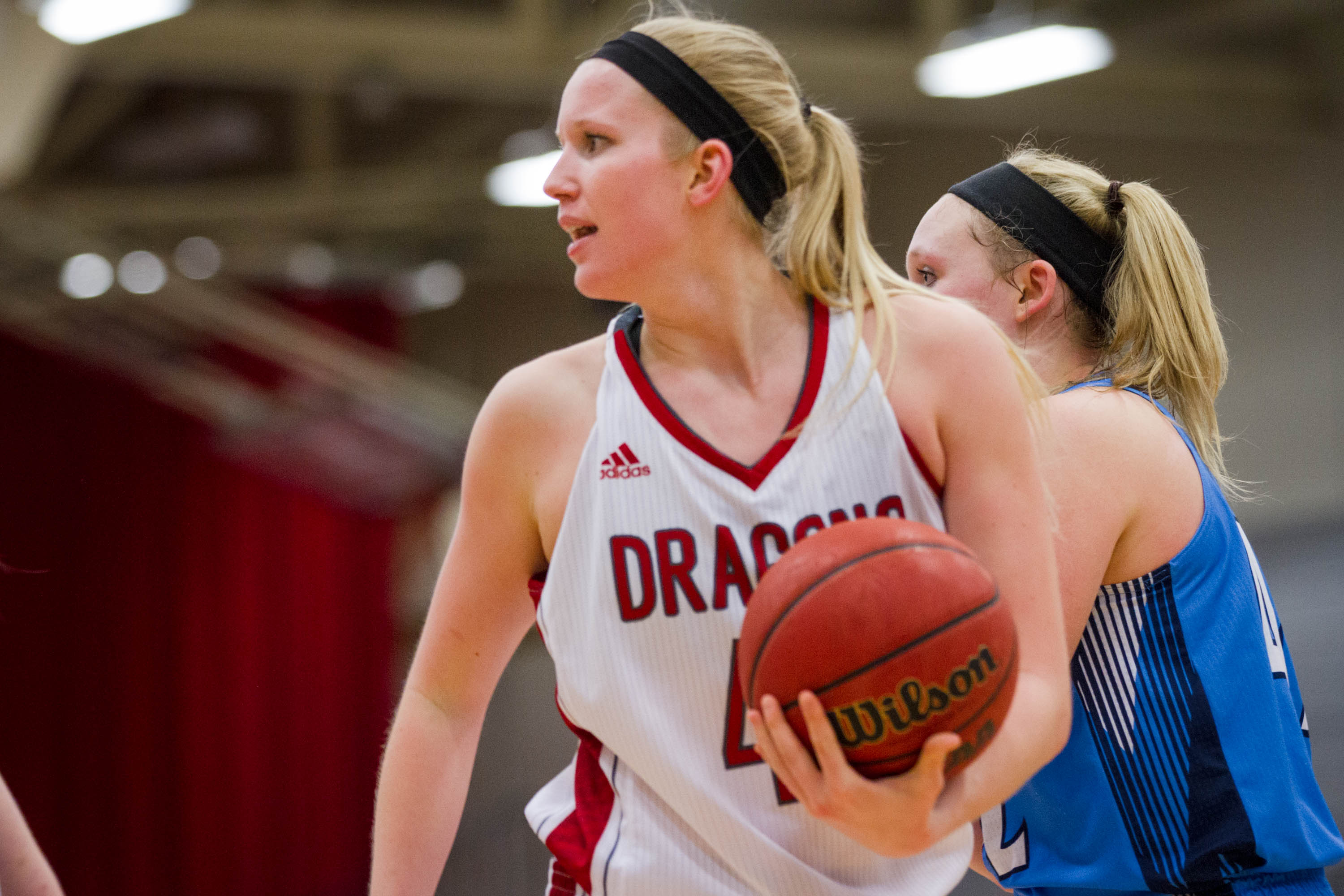 After a back-and-forth game with Upper Iowa, the women prevailed, winning 65-51.

Throughout the first half and well into the second half, the score remained close. The Dragons led by 14 points in the middle of the third quarter until the Peacocks pushed back via a 13-to-four run. The Peacocks were led by senior Whitney Kieffer, who scored a team high of 23 points. The Dragons’ lead shrunk to five points.

The team answered back with a run of its own. Scoring 12 points in the final six minutes, the Dragons were able to cap off their victory.

Despite the win, turnovers were an issue for the Dragons. Assistant coach Allison Swenson discussed the team’s performance with Steve d’Eustachio of Dragon Athletics.

“I thought we were a little flat tonight,” Swenson said. “We’ll have to come out with more energy. It’s do or die time now.”

Strese and junior guard Morgan Banasik, who scored 11 points and led the Dragons with three steals, were named to the All-Northern Sun Intercollegiate Conference First Team. Strese is averaging 7.6 rebounds and 13 points per game, both second best on the team. Banasik leads the Dragons in points per game with 14.6 and steals with 45. 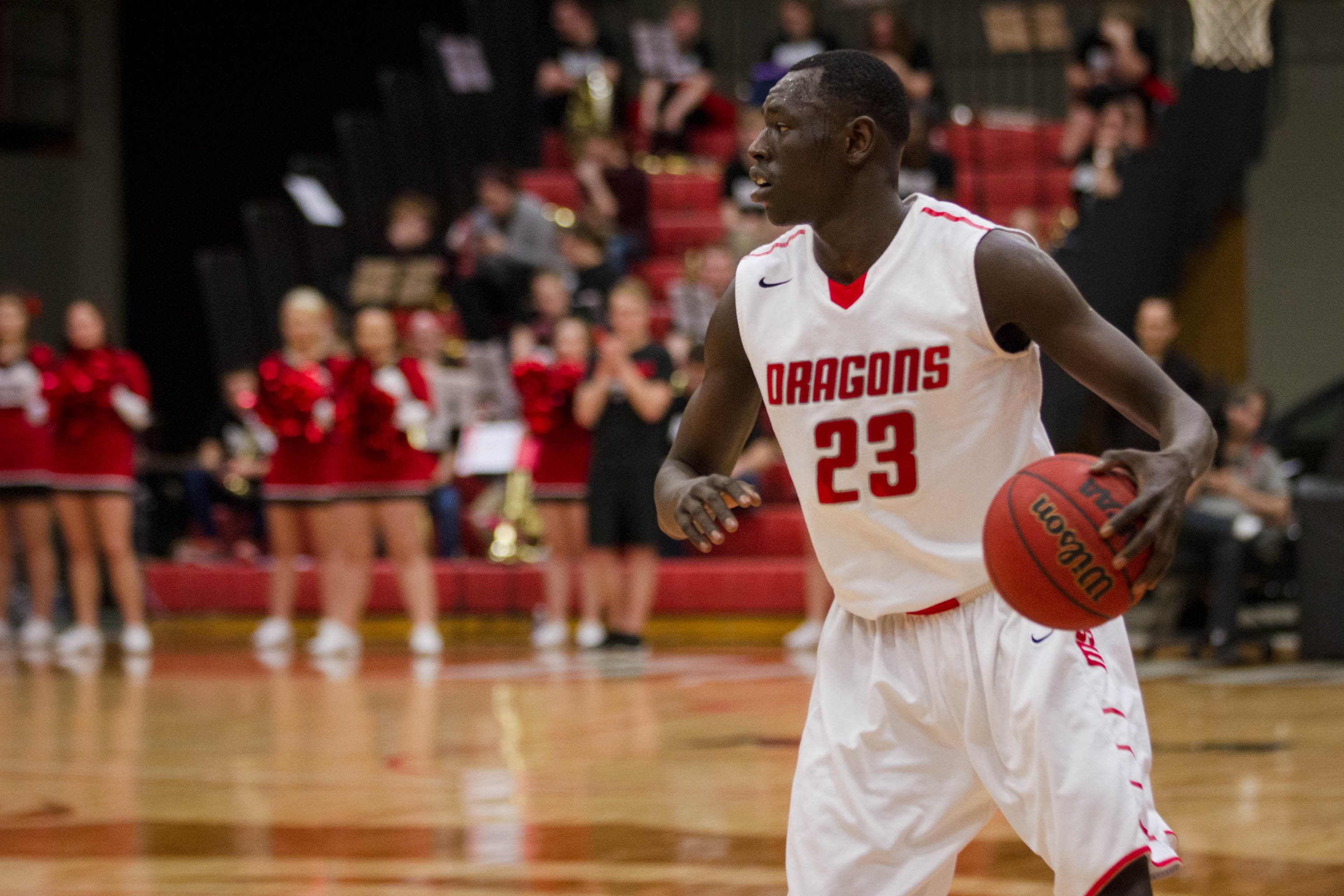 In likely his final regular game at Nemzek, senior guard Tyler Vaughan went out with a bang. The Dragons’ all-time leader in 3-pointers netted six first-half 3-pointers to jolt MSUM to a 109-83 first-round victory over Wayne State.

“(It) was just amazing,” Vaughan said. “I couldn’t have asked for a better way to go out.”

The senior guard scored 22 of his 26 points in the game’s first 15 minutes. MSUM had five different players including Vaughan make multiple 3-pointers, shooting 17-33 from behind the line.

The Dragons were also led by sophomore guard Tanner Kretchman, who tied his career high in assists with 13 — an NSIC tournament single-game record — and Isaac Sevlie, who was seven of eight from the floor, scoring 16 points.

All three are major players on the Dragons’ path to a third-straight NSIC North Division Championship.

Vaughan averaged 12.3 points per game and 2.2 3-pointers per game en route to the first all-conference honor of his career. He led the team in steals with 1.3 and was second on the team with 3.6 assists.

This will be Sevlie’s second straight All-NSIC First Team selection. The senior forward led the NSIC with 22.3 points per game and scored 10 or more points in all 32 games this season.

Kretchman averaged 13.5 points per game and 5.7 assists, leading the league with an assists to turnover ratio of 4.1. His 138 total assists were second in the NSIC this season.