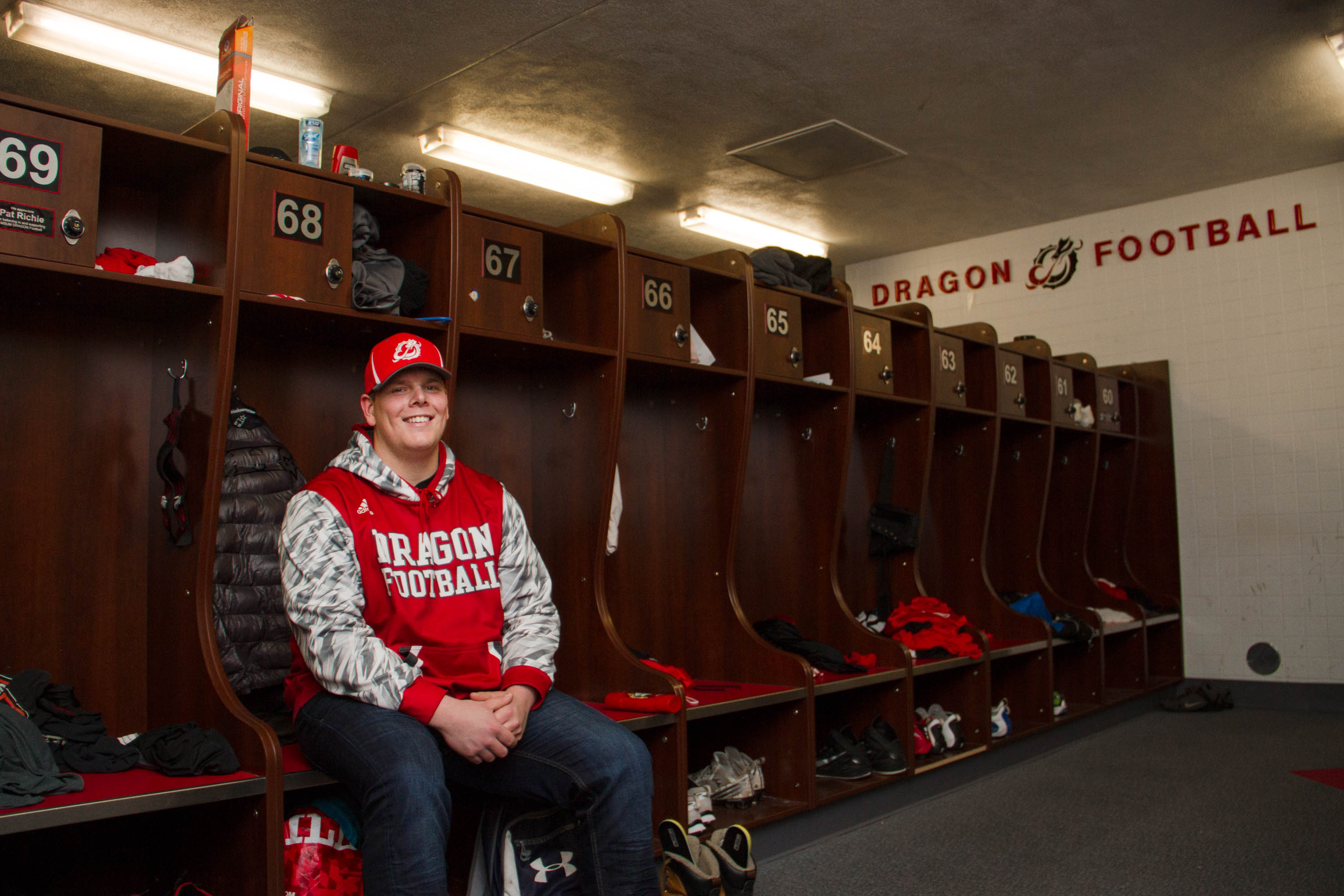 From Uppsala, Sweden, to Moorhead, Minnesota, MSUM football’s latest international recruit is overjoyed to be a Dragon. Given a scholarship and already enrolled this semester, offensive lineman Markus Torpman is feeling comfortable here.

“It feels like home,” he said. “In some regards, it’s a little better than home.”

Torpman said most football players in Sweden don’t go to college after high school. Instead, they stay behind to play in Sweden’s professional league, the Super Series.

Growing up, Torpman never played other popular sports like basketball or hockey. It wasn’t until a friend urged him to try out for football that he became much of an athlete.

Formally introduced to football at 15 years old, Torpman has been working hard at the sport since. In Sweden, he would practice before and after school. The days were long — he’d wake up at 6 a.m. to go to the day’s first practice, attend classes 9 a.m. – 4 p.m., and after an hour or two of homework, he’d be back on the field.

But the struggle of a busy schedule hardly compares to the earliest moments of his life. Born nearly four months premature, there was some doubt Torpman would live at all. He remained in an incubator for three months and was able to gain more than 10 times his birth weight in his first year.

“Luckily, I had good doctors, and haven’t any (health) issues since,” he said.

Fortunately for Torpman, it’s the only life-threatening adversity he’s faced. He doesn’t take life for granted.

“I wouldn’t call myself a miracle baby,” he said, “but I would say I’ve had a chip on my shoulder since my birth.”

Torpman knew in order to succeed and achieve his goals, he would need to attend college in the United States. He didn’t want to stay behind after high school and play in the Super Series. He said American football involves faster and stronger athletes.

“There will always be people who will doubt me, but I want my actions to prove them wrong,” he said.

In Sweden, Torpman joined the American Football Academy, considered the country’s best sports high school, to improve his skills. He put fierce effort into the sport, but remained on top of his academic work.

“If you are a slacker, you don’t have any business being a part of the program,” Torpman said. “If I didn’t attend the American Football Academy of Sweden, I wouldn’t be able to be at the level in order to play in college. I owe them a lot of credit.”

He said his coaches and family helped him achieve his first major goal of receiving a football scholarship.

Torpman’s mother, Helene, said via Skype it’s been gratifying to see how much he’s accomplished.

“We as parents try to help and try to support (him),” she said. “We will take him in the car to camps or whatever it is. It’s rewarding for us to see when he reaches his goals.”

Torpman said being a student athlete is comparable to working a full-time job. His responsibilities as a Dragon athlete closely match the process he went through to get his scholarship in the first place.

“Getting emails out and trying to prove to coaches that I am worth it — that was also a full-time job. Trying to get recruited from another country is hard. You have to perform in everything you do because you’re competing against every high school athlete in America.”

He admits the first two weeks after his move were overwhelming, but he’s settled down since then. Torpman said he has no regrets about his decision to enroll at MSUM.

“None of the other programs really made me feel the way I did here,” he said. “This is exactly where I want to be. Even though it’s a big adjustment, it’s exactly what I wanted. I wanted to come to a place where the group comes together and performs. Out of all the places I saw, this is the only place where that happens. That is what makes MSUM unique.”

Helene said his love for MSUM was immediate. During their campus visit, she said Markus told her, “‘I don’t need to go to another university after this. We can cancel the rest of the trip.’” She thinks he feels comfortable because of Minnesota’s heritage and Fargo-Moorhead’s similar size to Uppsala.

Since the semester’s start, Torpman has contacted his family almost daily. His mother said she loves to hear how he’s doing and how happy he is to be a Dragon.

“We usually use WhatsApp or Skype,” she said. “We can text or talk nearly every day. We miss him of course, but we wouldn’t have it any other way.”

His mother, father and sister will pay Torpman a visit around Easter. He said he’ll likely be sporting team gear, like usual, which he’s proud to own.