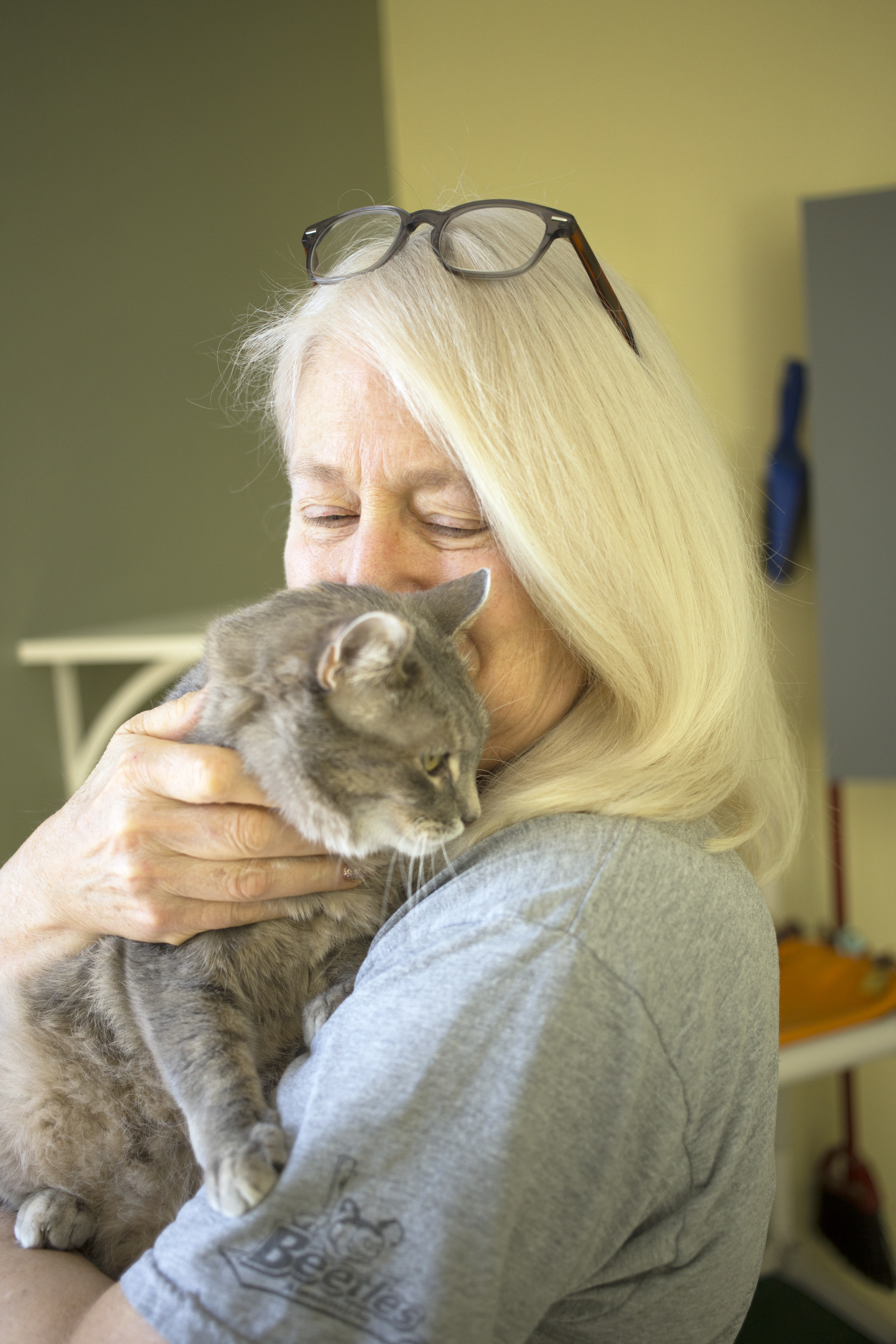 “I am a crazy cat lady,” she said, laughing. “I’ve always loved them.”

Frederick, who is currently on sabbatical, has spent her extra free time volunteering more hours at the shelter. While there, she gives ill cats medication, scoops out litter boxes, does laundry and fills the cats’ food and water. On Saturdays, noon to 5 p.m., she helps with tours and adoptions.

The nonprofit, no-kill shelter funded by donations, fundraising and adoption fees, houses more than 40 felines on the corner of Ninth Street and Main Avenue.

Six to 10 cats are housed in each of the shelter’s rooms, based on compatibility, so Frederick sometimes has to ensure new and old cats get along.

“(Yesterday), there must have been a fight with the newest cat because there was cat hair everywhere when I came in,” Frederick said.

She said that’s common behavior for rescue cats, since some have come from abusive or neglectful homes. Frederick said employees and volunteers sign liability waivers in case cats scratch or bite them, which happens sometimes.

“We all have battle scars from working here,” she said, adding they just come with the job.

Along with some other volunteers at Cats Cradle, Frederick transferred from volunteering at Minn-Kota Paaws, which serves as a spay/neuter clinic rather than an adoption center, in 2011.

Rescuing cats has always been a passion of hers, Frederick, who owns six at the moment, said. She’s yet to adopt a cat from Cats Cradle, but she said all her cats were found as strays or rescued from other shelters.

“They all do very well together,” she said. “My husband and I are never bored with them.”

Before working at Paaws, Frederick would rescue cats in the community on her own. Once, she discovered a family of cats living in her garage. She fed and cared for them until her neighbor found one bothering his dog. He called the police in hopes she would get rid of them. Frantically, Frederick searched for a reliable animal shelter.

“I was very desperate because I knew they would be euthanized at that time,” Frederick said. “That’s what pounds had to do back then.”

“I’m not joking, I started to cry when they said they could take them,” Frederick said. “I was so grateful.”

Shortly after, Frederick started volunteering at Paaws, helping monitor the animals after their surgeries.

“I actually thanked my neighbor because, if he hadn’t called the police to get rid of those cats living in my garage, I wouldn’t be doing what I love now,” Frederick said.

Frederick said Cats Cradle is a place where cats and people find companionship.

“It’s just a wonderful thing to see when the cat finds the person and the person finds the cat,” Frederick said. “Both want a companion and someone to love.”