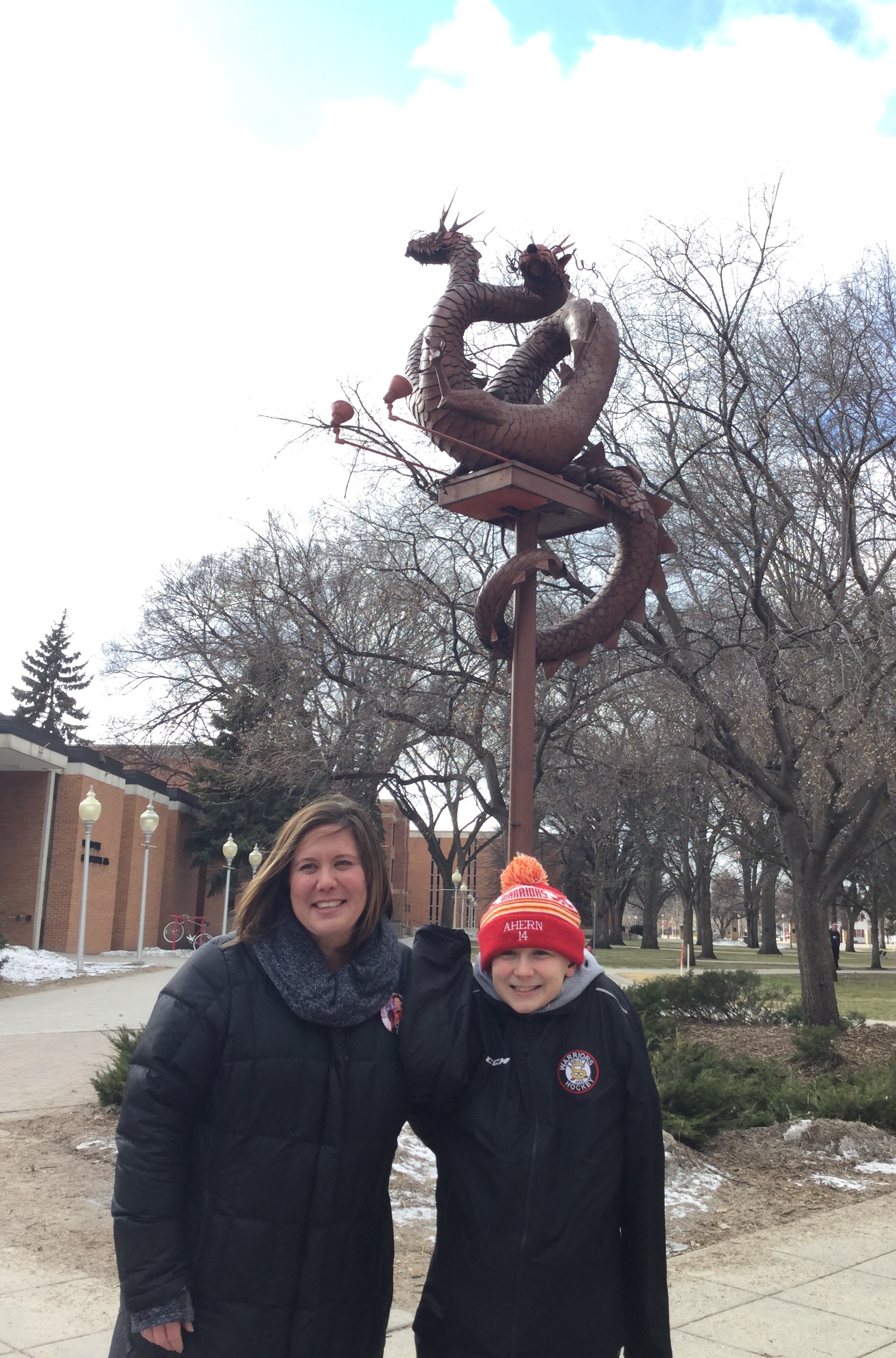 The metal sculpture, displayed on the campus mall, has long been a talking point and symbol of pride for students and staff of MSUM. But for Ahern and her family, the connection runs deeper.

Ahern’s grandfather, Howard Wong, was the original owner of the statue. For many years, it stood proudly outside his Chinese restaurant, simply called Howard Wong’s, in Bloomington, Minnesota. The dragon stood outside the restaurant from its opening in 1966 to when Howard sold the business in 1985, and from there it eventually made its way to the MSUM campus mall.

Ahern and her son traveled up to Moorhead from the Twin Cities area on Feb. 24 for a hockey tournament. Before Joe, none of Ahern’s children had seen this important piece of family legacy, though they had heard stories about it.

“I wanted him to see what it was about,” Ahern said.

Ahern explained that in its hey-day, Howard Wong’s was a cultural landmark.

Present at the restaurant’s grand opening was the beloved dragon statue. Ahern said her grandfather commissioned the piece from Don Danielson, a resident of Richfield, Minnesota, who hand built it scale by scale.

“It needed to be something big to fit the size of the restaurant,” Ahern said.

Though no one in the family had ever attended school at MSUM, Howard chose to donate the statue to the university not only to support its dragon mascot, but also to honor the community in which he had worked and started a family. Ahern laughed as she viewed the dragon for the first time since she was a young girl.

“When you’re little it seems so huge,” Ahern said. “The statue was something I was always excited to see when we went to my grandparents’ restaurant. When we’d pull up, especially at night, and the dragon was breathing flames, it was always something super neat and exciting to see.”

Mara Morken Fogarty, campus visit coordinator, was with Ahern and Joe as they came to visit Wong’s dragon. She was touched that he had chosen to honor the place where he worked and fell in love by leaving such a personal treasure.

“There is a beautiful echoing of Howard Wong’s story and his values with the core values of grit, heart and humility at MSUM,” Fogarty said, listing the three characteristics popularized by current MSUM President Anne Blackhurst. “I love that he fell in love here and came back.”

Ahern believes that the dragon was not only a fitting symbol for her grandfather’s restaurant, but also a fitting mascot for a college.

“Dragons are actually considered to be very smart,” Ahern said. “It’s just great that it’s being used in a place where it will mean so much.”

In honor of Ahern and her son’s visit, the statue was rigged up with its propane tank and spit fire all afternoon. Usually the dragon’s fiery display is reserved for special campus-wide celebrations, such as Homecoming and Dragon Frost, in addition to Welcome Week and a few other events throughout the year.

“We’re the dragons, if we didn’t shove it in your face enough,” Britz said with a laugh.

There is one thing that is apparent to everyone who visits MSUM: our Dragon pride.

“Working in admissions, I see Dragon pride every day,” Britz said. “Whether it’s people wearing dragon gear, or treating others with respect or just, ‘Hey, there’s a dragon on the wall.’”

Ahern was also impressed with the spirit found on campus, and it was something she identified with her grandfather.

“My grandpa had a ton of pride in what he did. He didn’t ever do anything that was small or simple,” Ahern said. “He did everything he could to be successful, something that you all obviously take to heart very well. In the Chinese culture, everything is about pride, so the fact that you all have the pride of the dragon . . . will stick with us forever. It’s a big honor. Thank you.”

A somber goodbye and a bittersweet hello