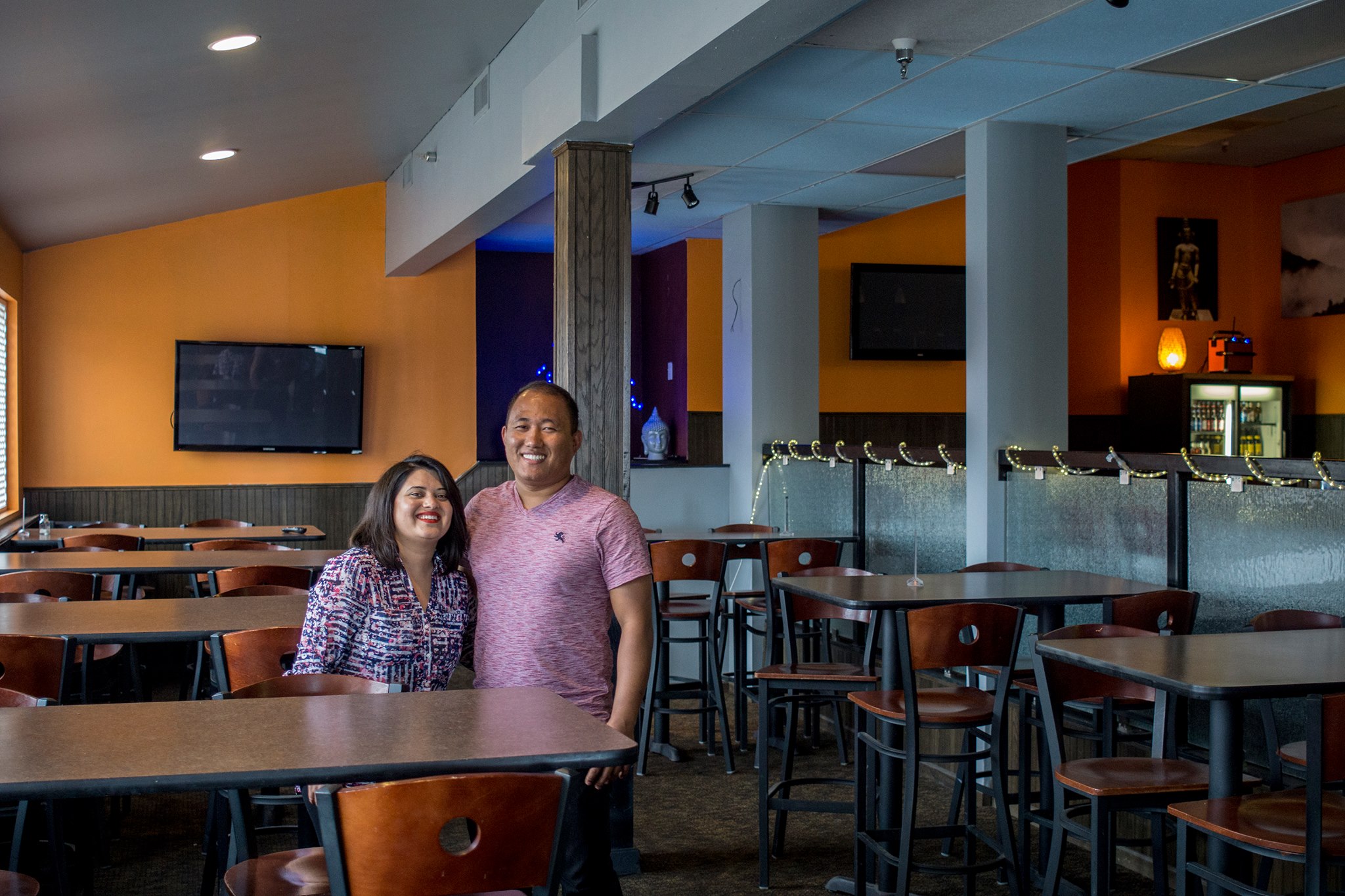 It was Christmas Day in 2008 when Saru Pokharel’s flight from Nepal landed in north Fargo at a snow-covered Hector airport. She stepped off the plane in sandals and began her first semester at MSUM just days later.

“We were making snowmen, snow angels,” Pokharel said. “That first semester was crazy.”

Nabin Dangi, also from Nepal, was one of the first people she met after starting school. He’d been at MSUM since fall 2007, and after gaining some stability in the area, had become president of the International Student Organization.

Dangi would often help students just arriving from other countries with grocery shopping and apartment searches. He would accompany newcomers to WalMart and show them where necessities like shampoo and other toiletries were located. He still does that, he said, when he encounters someone who needs help.

“I can’t imagine how many stupid questions I asked when I came here,” Dangi, 28, said. “All these new kids come here, they don’t realize this is a major shift in your life. They’re just trying to cope with it.”

The former healthcare administration majors have certainly experienced shifts of their own since first settling into the area. Today, they own and manage one of Moorhead’s most popular restaurants, Everest Tikka House, in the Moorhead Center Mall. Their business celebrates its one-year anniversary May 14.

Pokharel said the difference between food here and back home was the most jarring part of her transition from Nepal to Moorhead.

“The food was the worst … because when we were first here, there was only one Indian (restaurant), Passage to India,” Pokharel, 26, said, adding that another restaurant, Saffron was once another option, but that closed shortly after they moved here. “In recent years, we’ve seen restaurants booming, and different, multicultural restaurants and things like that. They’re getting better, and the food is getting better, I think.”

The lack of options they saw, especially when first settling into the area, was one reason they decided to open the restaurant, which today offers Indian food alongside the only Nepalese cuisine around.

Their other motivations, Pokharel said, were more personal. It was two years after they graduated from MSUM that the restaurant came to be. They had entered the workforce — Pokharel was an account manager at Microsoft, and Dangi had interned at Touchmark and Bethany nursing homes — but they knew they could do better. Opening Everest Tikka House, Pokharel said, was a means of finding fulfillment in the workplace.

“For us, it’s not finding a job, but showing our full potential,” Pokharel said. “Any time (we) would apply for a leadership position or something like that, people were always thinking that we were trying to move too fast into a position, which always limits what we are capable of.”

Today, she said, they’re doing what they “really want to do,” leading and managing a staff of 12, mostly natives of Nepal, India and Pakistan.

“They’re from all different regions, but we treat them like family,” Dangi said. “We’re family-oriented — at least the culture is … The biggest thing is making your staff happy. Customers come first, but I think our staff are our customers, too.”

Dangi said their employees have played a part in their being able to return to school. Pokharel and Dangi are wrapping up their first semesters at North Dakota State University, pursuing master’s degrees in food safety and business administration, respectively.

“We want to study. We never want to give that up,” Dangi said. “It’s always good to have that cushion, the confidence of having knowledge.”

It’s a heavy load attending classes and completing coursework, all while running a bustling business, but for them, the long workdays have become routine.

“Sometimes, being a restaurant owner and stuff, you have those days where you’re going to have to wake up anytime and be there,” Dangi said.

In the beginning, they’d come to work as early as 6 a.m. and work as late as 11 p.m., painting and getting the restaurant ready to open.

Still, they say, the work’s not over.

“We give 100 percent at our work, but we know this is not our full potential,” Pokharel said. “We can do much better than this.”

Pokharel said they’re considering opening a Tibetan and Nepalese restaurant across the river in Fargo after a year or so. Tibetan cuisine’s mountainous origins make for the use of fewer vegetables than Indian food demands, and it’s comprised of meal staples like hearty soups and large dumplings — perfect for chilly winters on the plains. Certain Tibetan dishes include beef, too, which is uncommon in Indian cuisine.

“It makes you full. It’s a ‘one meal can fill you the whole day’ kind of deal,” Pokharel said. “You have to eat, and then you go work all day and come back and eat again.”

Their first year in business, she said, has proven the area’s demand for more ethnic food options.

“From the beginning, it was no stopping,” Pokharel said. “I think people in Moorhead and Fargo have had a very positive response and very positive feedback.”

The business has come a long way since its opening day, which saw a graduation party in the space hosted on limited resources.

“We were not ready at all, but we had to be ready,” Dangi said. “We had food and stuff, but we didn’t have any pictures hung or anything. We didn’t have beer or wine.”

Still, it was a start.

“Somebody cried that day because we opened the restaurant,” Pokharel said, referring to Dangi.

“I did,” he said. “I mean, we did something. When you can call something yours, that’s what it is. That was awesome.”

Since that day, the positive reviews have kept rolling in. The restaurant currently has a four-star Yelp rating.

“I love all the reviews, all the responses,” Pokharel said. “We read all of them. Every single one.”

But Dangi said the best is yet to come.

“We’re in, I would say, a growing phase,” Dangi said. “We’re just starting. We haven’t proven anything.”