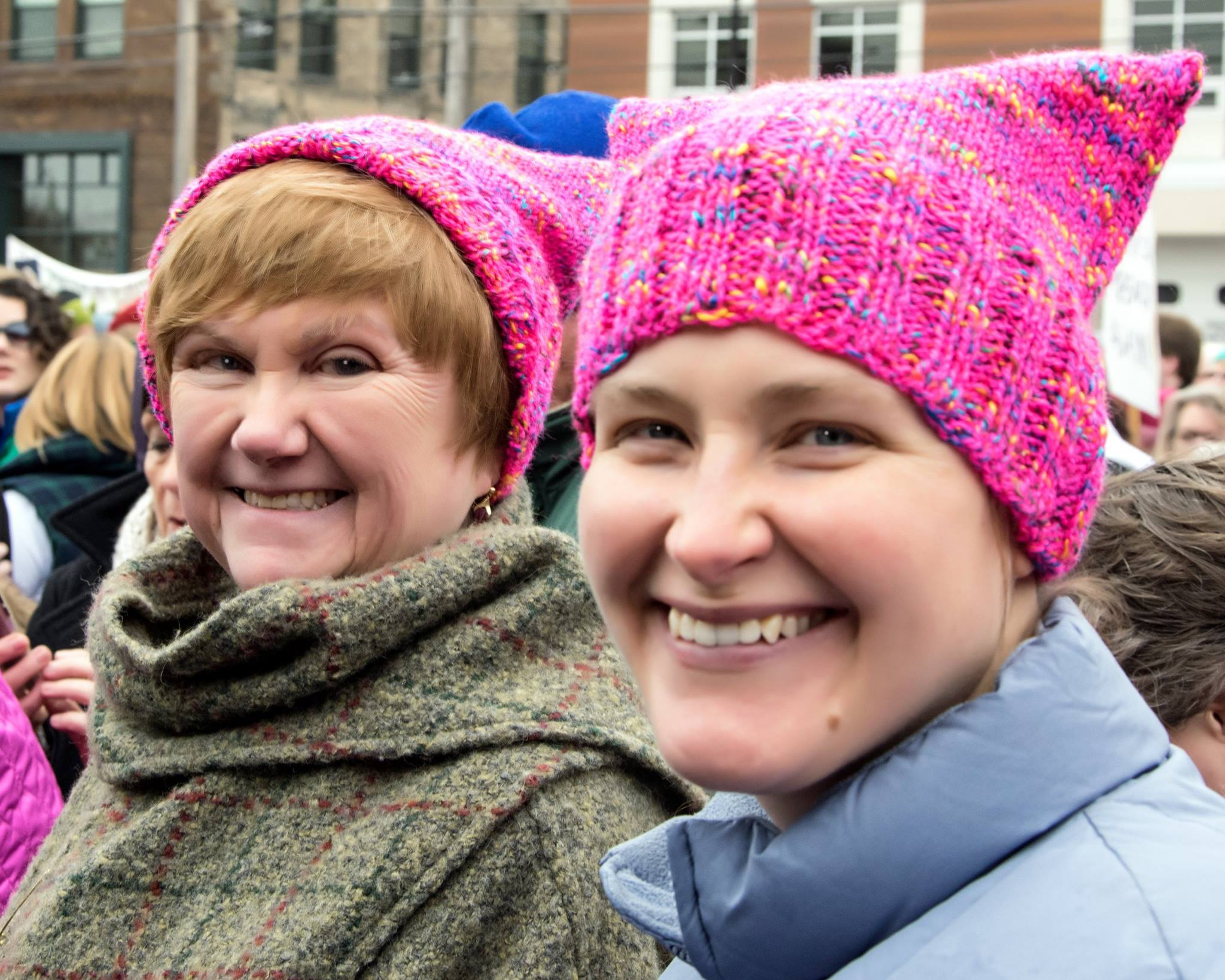 Armed with protest signs and pink hats, roughly 4 million U.S. women marched in the largest single-day protest in this country’s history on Jan. 21, 2017.

The Women’s March took place the day after President Donald Trump’s inauguration. According to Dr. Kandace Creel Falcón, director of women’s and gender studies, the date was chosen specifically because of the new administration.

“Having studied some of the organizers’ statements, the goal was to advocate for women’s participation in the public sphere and to signal to new political administration that not everyone agrees with them,” Creel Falcón said. “It was planned. . .to bring community together, to convene and process and to say from day one, ‘We are going to be here.’”

“When they finally stopped crying, they decided to plan a march in Washington, D.C.,” Lahren said. “For what reason? To show little girls around the country that they too can play the victim card. They too can have their greatest contribution to society be whining about the election. They too can aspire to protest a man and a presidency millions of other hard-working Americans, male and female, elected into office. Wow, what a message of empowerment!”

Sophomore Madison Lykken originally planned on attending the march, but instead watched from inside a coffee shop in Fargo.

“I feel as though they were bringing too much politics into the matter,” Lykken said. “I feel this was a women’s march; it shouldn’t be too much about politics. A woman’s march should be about women’s rights.”

Lahren also called the protests unconstructive, but Creel Falcón disagrees with this.

Roughly 460,000 women attended the march in Washington, D.C., which was three times the number of inauguration attendees the day before (New York Times). Sister marches were held in all 50 states and all seven continents.

“I think it’s a really exciting time to understand that in our ever-connected and global world, we need ways to be in solidarity with women everywhere,” Creel Falcón said. “Marches represent shared understanding that power in the U.S. affects the world.”

One of the symbols of the march was a pink hat with cat ears, named the “pussy hat” after the infamous tape of Trump that came out during the 2016 campaign. Dr. Nancy Hanson, a communications and journalism professor, read about the hats online and decided her knitting needles should join the movement.

“The idea is to see something used to demean you and make it a symbol of resistance and pride,” Hanson said. “It gives it more meaning, making it a mark of pride rather than disparagement.”

Creel Falcón attended the march in St. Paul, while Hanson went to the one in Fargo.

“The reason I was there—I was marching for you—students,” Hanson said.

“The basic premise that men and women have equal rights continues to this day to be controversial,” Hanson said.

Some protesters referenced the second-wave feminist movement of the 1960s and 70s with signs that read, “I can’t believe I’m still protesting this” and similar phrases.

“It felt good to be there and to see many of the women from 50 years ago were still there and still spitting mad,” Hanson said.

Alongside women who participated in second-wave feminism, there were college students, parents with young children, men and other marchers protesting for a multitude of causes such as Black Lives Matter, LGBTQ+ rights and climate change.

“Perhaps we can achieve progress for all of us,” Hanson said. “If it affects other people, it affects me—directly or indirectly. It affects us all.”

“It’s obviously very prevalent in this society with everything that’s going on,” Lykken said. “I feel like women should go—both men and women. It’s important for both.”

However, another criticism of the march is that 54 percent of white women voted for Trump, yet the protest was largely organized and attended by white women.

“It felt indicative of the ways in which the day’s events could be viewed as problematic: the notion that women’s rights were suddenly the most important cause in our nation, or that there haven’t been protests and activist movements worth attending until the election of Donald Trump,” Jenna Wortham wrote of the march in The New York Times Magazine.

Along with this, some marchers were not actively engaged.

“Some people were chanting, but some people were walking around on their phones and weren’t really engaged with it,” Lykken said. “What’s the point of even being there if you’re not going to even focus on it?”

Creel Falcón hopes members of the women’s rights movement can use the criticisms to improve their cause.

“I respect the criticism that came out,” Creel Falcón said. “We can look at these challenges and critique, but I hope we can take these criticisms.”

During the election, #Repealthe19th trended on Twitter after a study showed Trump would win if only men voted. While highly unlikely Trump will revoke women’s right to vote, both Hanson and Creel Falcón are worried that other rights could be taken away.

“I am honestly more frightened for the future than I have ever been in my entire life,” Hanson said.

“(The march) was filled with hope,” Creel Falcón said. “Optimistic, even as we were resisting some real fears that our rights would be taken away. I felt empowered by the sheer number of people.”

Looking into the financial future