Navigating through the night 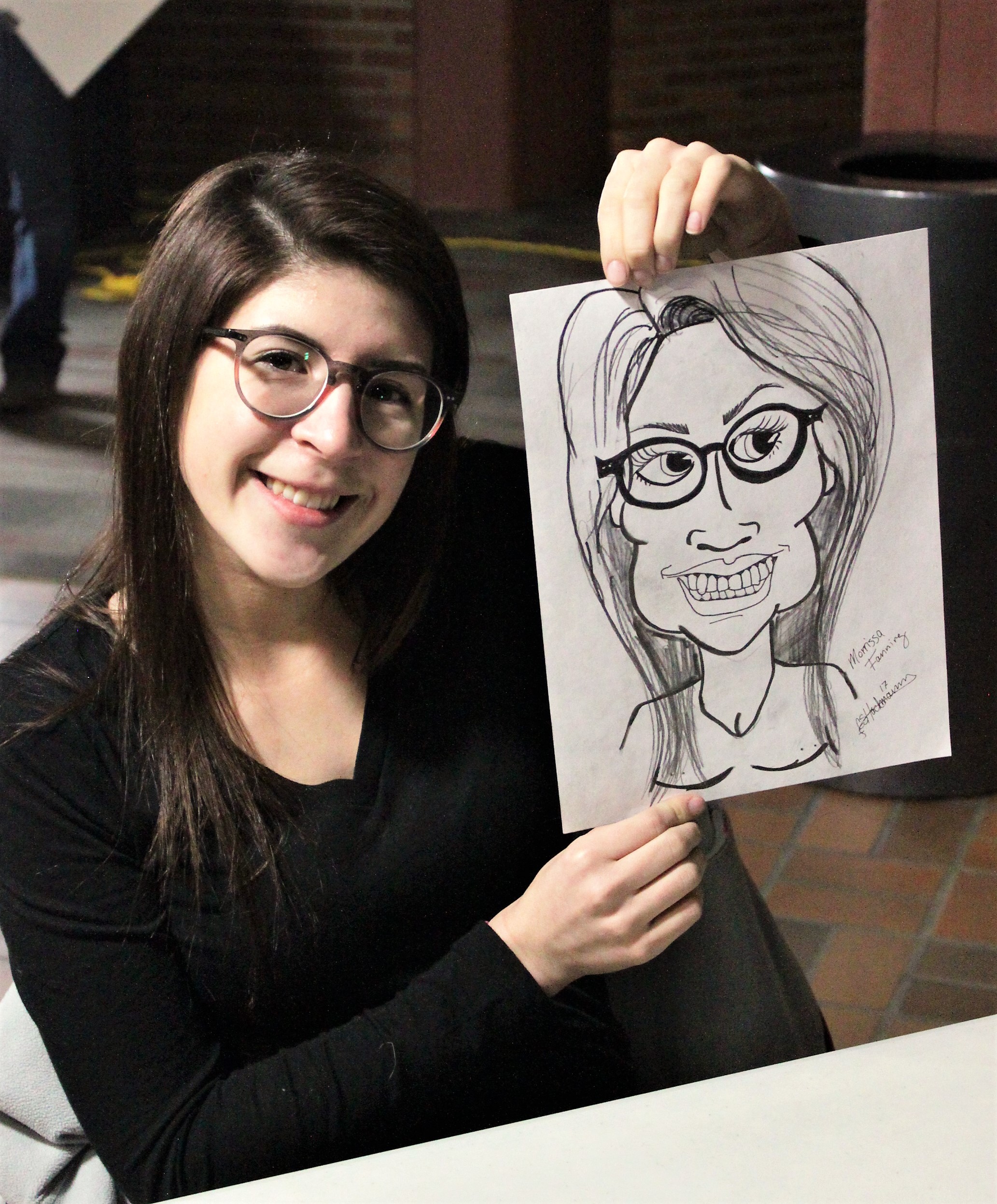 Once a year, the general public is invited to walk the labyrinthine hallways of the Center for the Arts (CA) to engage in a wide variety of art activities.

On Feb. 23, the annual “Night at the CA” festivities began with pizza and excitement. Throughout the night, college students, elderly people and families wandered the corridors of the art building to complete different exercises and crafts.

The CA is known for its maze-like hallways, which create figure-eights and unexpected linking passageways. However, that mystery is just part of what art majors love about it. Desi Miller, a senior art student, definitely has a love for exploring.
“My freshman year I just explored campus,” Miller said. “I figured out which buildings I had access to and snuck in and just wandered around lost at night a couple times, because I was like, ‘This seems like fun, I’ve never been in here before, let’s see what’s in here.’”

Miller said that made the CA a perfect fit since there are always new areas to explore, no matter how many times she visits.
“Until I met one of my friends that’s a theater student, I’d never been into the theaters really,” Miller said. “One of my friends is a film student, and I had no idea what was down there. I got to see one of the rooms and I was like, ‘This is really cool!’ So there’s always something new to find in the CA.”

That spirit of adventure is not unique to Miller. In the stress of finals when work hours get particularly long, students become more prone to wandering the dark halls.

“There’s nights when (students are) like, ‘I need to stay awake.’ so they’ll get up and go for a walk or something and wander around,” Miller said. “There’s always a lot of fun things. I like going into the computer labs to do printing, wandering underneath to the film department to get snacks from the vending machines. They have the better vending machines.”

Several of the other volunteers explained that they love finding new things in the CA, as do the many art students who were exploring during Night at the CA.

“It’s just like art kids exploring different art forms,” said Kattlynn Winkelman, the treasurer for the Works on Paper Guild and one of the printmaking volunteers during the event. “I think if any non-art majors come in here, they’re probably dragged by art majors. If you’re not an art major and you don’t know an art major, then coming in here is kind of terrifying. (It’s) literally a figure-eight . . . which makes it impossible, if you don’t know where you’re going, to find where you’re going.”

The nature of the CA’s layout may be confusing for non-art students, but it means that there are many relaxing and hidden spaces that most people might never find.

“We have our own little private nook that we can kind of hide in,” Miller said. “There’s been days when I kind of need to be alone, and I can usually do that in the CA because you can find a space where you can just chill out and not have to worry about people.”
Many of the art students voluntarily spend time in the CA, whether they are working on homework or not. Brian Wagner joked that as a printmaking-emphasis art major, the president of the Works on Paper Guild and a student worker for the art department, he lives in the CA.

Corinne Teed, the new printmaking professor at MSUM, heartily agreed, joking that she comes in each morning to the art students hanging like bats in hammocks on the ceiling. Jokes aside, the art students spend so much time in the building that they can even rent studio spaces for a semester.

“The art department has its own studio spaces that students can apply for during the year,” Miller said. “It makes it so that a lot of students will be able to have private space away from their dorms. For some people it helps a lot because it’s like, ‘This is where I work.’ It gives you that mindset that ‘In my dorm I sleep; in my studio space I go sit and get my work done,’ whether it’s private work for themselves or work for their classes. So people will actually bring their friends in there and chill out and make it a little study space.”

The roughly 15 studios are so popular that they quickly run out each term, so priority is given to older students, particularly graduating seniors.

“You always have to go through the application process,” Miller said. “And they usually give them to people who are further along in their degrees because they’re the ones that need the time and the space to work on their stuff. And depending on the person—if you’re working on a huge life-size painting, you’re not going to be able to bring that home with you. So having the application process really helps.”

During Night at the CA, however, it wasn’t just the art students staying up after hours. With the misleading layout of the CA in mind, perky little “More Fun This Way!” signs encouraged newcomers to get lost in the amount of possible activities.
The activities were set up as workshops, and most of the departments helped visitors walk away with an art piece of their own. For instance, in the printmaking room, participants chose from different carved blocks of heads, torsos and bottoms before having the blocks coated in ink and stamped onto the page. The “Frankenprints,” as they are called, are new to Night at the CA.

“Last year we did a letterpress print,” said Winkelman. “But that was the old professor. It was just a dragon—just a logo. So this is something new we’re trying.”

Teed explained that one of the fun parts of printmaking is that there is such a wide variety of options for public workshops.
“In printmaking there’s so many different things that you can do when you have the public coming in to do something fun in the shop, so this is just one potential iteration,” Teed said.

Other activities included caricatures, conducting lessons, an open improvisation stage and steel drum concerts by visitors, among many others.

“I want to see what they’re doing in the costume and the makeup studio, because I know they’re doing something,” Winkelman said, admitting that if she wasn’t working, she would have also attended the papermaking workshop not far away.
Brian Wagner, agreed with Winkelman.

There was joyous chaos as the night wore on. Students moved in packs from one area to another, sampling the diverse selection of art forms on display. There were plenty of literal displays too, with cases of student work in every possible medium and the annual juried student exhibition open in the gallery. The work on display is rotated out regularly, another popular aspect of the CA.
“You get to see students and what they’re doing, and you also get to see people you know and how they’re progressing as artists,” Winkelman said. “That’s really neat to see work change.”

Although the art is constantly changing, the countless mysteries of the CA will remain. The next time you feel like getting lost, look no further than the CA, and keep your eye out for new surprises.

“There are little Where’s Waldos hidden throughout the building,” Winkelman said. “I think there’s also clowns, but we don’t talk about the clowns.”

“Reefer Madness” the Musical at MSUM Through April 13