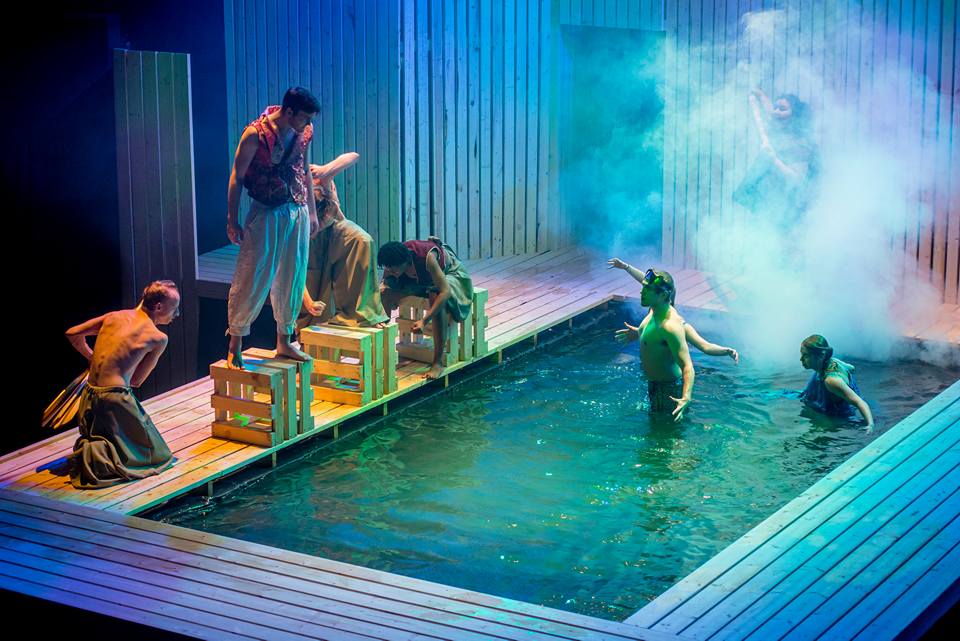 Actors brought waves of emotion to their audiences with their technically difficult production of “Metamorphoses.”

From April 5 to 8, the MSUM theater department brought to life playwright and director Mary Zimmerman’s “Metamorphoses,” an interpretation of Ovid’s classic tales of Greek mythology. The play utilized a series of short episodes from popular and lesser-known myths, from Midas and Orpheus to Eros and Ceyx, to build emotion and common themes.

The production was unusual in its use of a large pool constructed several feet above the stage in the Gaede Theater, a unique space to fit the unique needs of the show. The actors all used the pool throughout the show, whether for casual setting references, dramatic moments, or even actor entrances and exits via a passage hidden at the back of the pool.

The show was part of a three-piece collaboration between the tri-colleges of MSUM, Concordia, and NDSU, each of which produced a Mary Zimmerman play from March to May.

According to MSUM theater professor and “Metamorphoses” director Patrick Carriere, the production emphasized the transformational aspects of the script, as well as the many interpretations and perversions of love.

“All throughout ‘Metamorphoses,’ we had this idea of transformation, which was one thing that kind of drove my thinking,” Carriere said. “Another one was the stories themselves all revolved around some understanding of love or the distortion of love or the lack of love. So to get the dimensions of that into the performance was important to me.”

It wasn’t just the characters learning to love and work together either—it was the cast too. The assistant director and choreographer for the production, Caleb Reich, said the connections between the cast were an unexpected but welcome outcome.

“There were twelve actors in the show, and they changed parts so rapidly that no one was ever like a ‘star,’” Reich said. “It didn’t have that kind of sensibility to it. They really relied on each other and had to build each other up and create this world together each night. So building that little family—that community of trust was—it wasn’t a challenge, but it was a happy kind of side effect.” 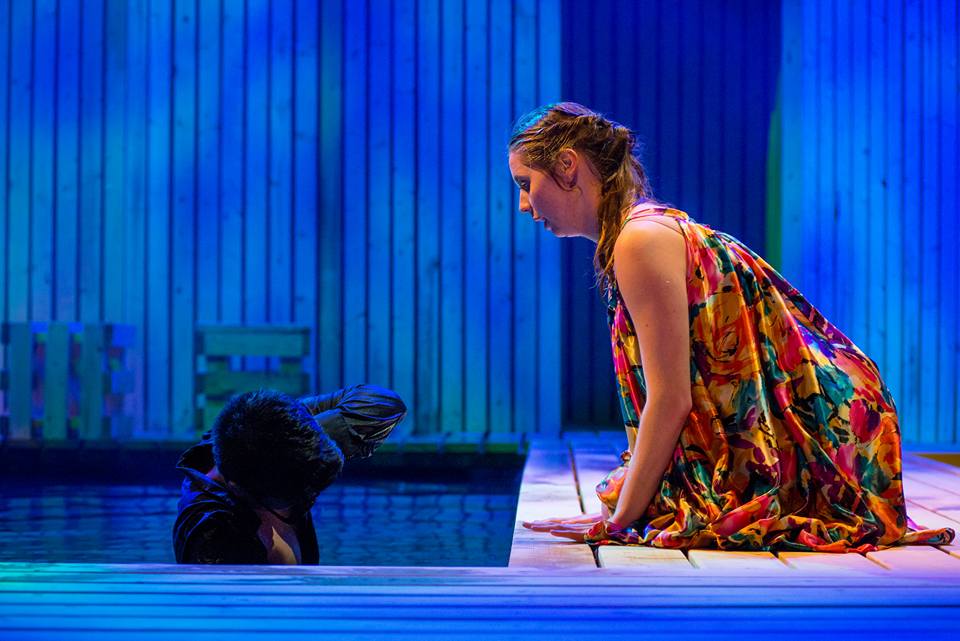 The show was packed with emotion, particularly in the challenging final scene. To close the play, the actors slowly drifted onstage and reprised their roles from previous stories in pairs to form a human tree. According to Carriere, the fluidity of the scene was far from easy to create.

The beautiful moments in the water also brought a host of challenges for the cast and crew. For one, Carriere had to worry about the health of the actors after being repeatedly exposed to water night after night.

“We were just trying to figure out how to make it as comfortable for our actors as we can, given that we’re putting a pool onstage and making them go in and out of it all the time,” Carriere said. “We had a couple actors get sick—one of them got really sick right before the show. So we had to really think about how can we keep this person healthy so they can perform.”

In order to combat these worries, the temperature in the theater was raised slightly, although they could not increase the temperature too much without the audience overheating. Another precaution was providing lots of towels to the actors offstage.

“During the run of the production, we did over 170 loads of laundry for the show. On average, we did 10 to 12 loads of laundry for each performance, which is considerably higher than a standard show,” costume designer Ricky Greenwell said. “So yes, there is something to be said about the fact that—and I would say that half of that is just on towels—so it’s not just that there were that much clothes; it’s just you also have actors who are constantly going in and out of the water who are trying also to stay warm and prepared for their next role, monologue, performance.”

And laundry was not the only challenge for the costume department. They were also working overtime to produce all 36 costumes in a mere three weeks.

“The show from start to finish was three weeks, as far as build time was concerned,” Greenwell said. “And we had four, maybe five weeks to actually do all that in, but as soon as the actors were in the pool, I started trying to give them costumes—because this is an atypical show.”

Each of the universities not only put on a Greek-inspired show by Zimmerman, but they also had the incredibly unique opportunity to meet and rehearse with her before their respective shows. It is not often that actors and directors get a chance to meet a living playwright, let alone the Tony Award-winning Zimmerman.

“I think it was a great opportunity for our students and our faculty. She’s a very open and generous person—generous with her thoughts, her ideas, her experiences,” Carriere said. “(She) really I think spoke with our casts in a way that felt honest, and there wasn’t any kind of standoffishness on her part. She was right in there helping our students in any way that she could. So she was wonderful; it was a great visit.”

After rehearsing a lift scene and having Zimmerman step in to try something, Reich lifted her like he would any other actor. Reich said the other cast and crew members were astounded at his calmness at the time.

“It was crazy. I didn’t even think about doing these things with her until after the fact. They (the cast) were like, ‘Wow, you lifted a Tony Award-winner!’ And I was just like, ‘I guess?’ I was just doing my job.”

The collaboration between the colleges and Zimmerman did not happen overnight, and it was not just lucky that Zimmerman was able to visit the campuses to give her advice and collaborate with the artists.

“I think it started several years ago in just the desire to follow up on an idea that we could work together as three institutions. And we talked about many different ways we could collaborate, and the one that seemed to be the easiest first step would be to just find a theme or an idea around which all three colleges could do a production,” Carriere said. “And the ultimate goal was as we did this to try and bring someone in that all three colleges could benefit from their presence, and (Mary Zimmerman) was available. Then we kind of just went step by step and decided on Mary Zimmerman, made contact, and then past year and a half or so we’ve been trying to put it all together.”

While bringing it all together had countless challenges, both technical and mental, the MSUM theater department transformed their production of Zimmerman’s “Metamorphoses” into a unique blend of art, science, and a touch of the gods.