Maybe it is easy to identify problems and develop quick solutions for unjust situations, but without the right training, those ideas for change will never come to fruition.

At MSUM, Dana Bisignani, the Women’s Center coordinator, is on a mission to equip students with the knowledge necessary to plan an organized opposition. The brand-new series on facing social problems is called “Activist’s Toolkit.”

“They are skills-based workshops,” Bisignani said. “I want to put as many tools in people’s hands so that they feel like they have a community of other people they can work with—those who come out to the workshops and come into the center—but they also have the actual tools to put into practice some of what the Women’s Center is about.”

Bisignani said that from the inception of the first women’s center at the University of Minnesota in 1960, women’s centers have had a strong focus on activism and academics. That atmosphere has allowed organized groups to tackle problems at the forefront of society, all the way through today. 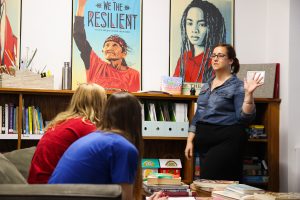 The “Activist Toolkit” is designed for college students attempting to deal with problems like not having enough washing machines in the dorm buildings, but the model can also be brought with them when they leave school and join the workforce.

“I think the overall goal is to make students, in particular, feel like they really have the ability to be a change-maker, both on campus and in their communities,” Bisignani said. “Eventually, they’re going to leave MSUM as well. I want them to feel like whatever community they go into … they feel like they know how to start change.”

The idea of change is not lost on Bahati Muhiya Numbi, an MSUM student who found her niche within the center.

“I enjoy being involved with the Women’s Center on campus because I can be a part of change and help people understand what ‘feminism’ means,” Numbi said. “We don’t have to wait for something to happen to start wanting a change.”

During the kickoff workshop, Bisignani introduced the “bull’s-eye” concept to the ten students present. It depicted the various levels of involvement and organization in any given activism situation, from planners and organizers to haters on the outside. The core leaders are in the innermost circle, while more casual participants are in the outer rings. To Numbi, however, those supporting players are just as important.

“(At the workshop) they can see that they don’t need to be experts about the subject to be part of the change,” Numbi said.

At the start of the first event in the “Activist’s Toolkit” series, “Rabblerousing 101,” there were nine women in attendance. About half an hour in, a lone man joined the group. Though his presence was hardly felt at the workshop, Bisignani says there is a place for people on every part of the gender spectrum in these events.