On a dry campus, creating an environment that attracts students late on a Friday night can be a challenge, but one MSUM student organization specializes in just that. One such event was the Harry Potter night held in the CMU Underground on Sept. 15.

“We’re trying to make everyone feel like they’re getting away from college life and kind of escape to another reality,” explained Anna Sandmeier, an event coordinator for Dragon Entertainment Group.

“We just have different activities set up,” Sandmeier said. “They can decorate wands. They can color some bookmarks and drink some butterbeer.”

Students at every table, Potterheads and tagalongs alike, participated in Harry Potter trivia and used various props at the photobooth.

One of the most unique parts about the Underground is the nightclub feel on a college campus. Throughout the year, the space plays host to various events such as live music and swing dancing. From the stage and sound system to the bar, it’s easy to forget the space is inside the student union at an educational institution. It is evident, however, that the venue sits on a dry campus with the mocktail specialists tending the basement bar.

The non-alcoholic artists are members of The Eleven, a student organization that hosts evening student events in the Underground about once a month. According to their Facebook page, the group is “built towards stopping underage student drinking by offering a safer, on-campus alternative.” 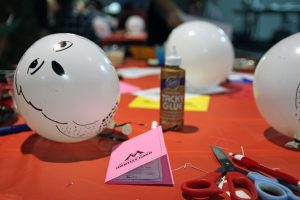 The Eleven’s president, Jamison Cortinas, swears by that statement. His passion for providing this service to the students is mirrored by how much he cares about the safety of his fellow classmates.

“It’s good for the people who are kind of looking for something to do like the experience, but don’t want to do anything that wouldn’t make their mother proud,” Cortinas said.

In the eyes of Cortinas, events like Harry Potter night are destinations for everyone, but the ultimate goal is to provide a sober outlet for those on the cusp of making a bad decision.

“I think it is good for the people who are almost being peer pressured to go with their friends that are … the troublemakers … the ones that are gonna go out and get drunk,” Cortinas said. “It’s a good place for those people being like, ‘No, I wanna go to this underground mocktail bar at the school. It’s really cool. There’s people here. They play music. It’s just like the normal experience, but safe, allowed and legal.’”

That motivation for wanting to create a fun alternative to the party scene for students is also felt by those within Dragon Entertainment Group, which puts on a wide variety of events nearly every week.

“We’d rather have them be here in a safe environment than (doing) who knows what,” Sandmeier said.

We are Looking for Creative Writing!