All hail Macbeth: MSUM takes on the Bard’s play 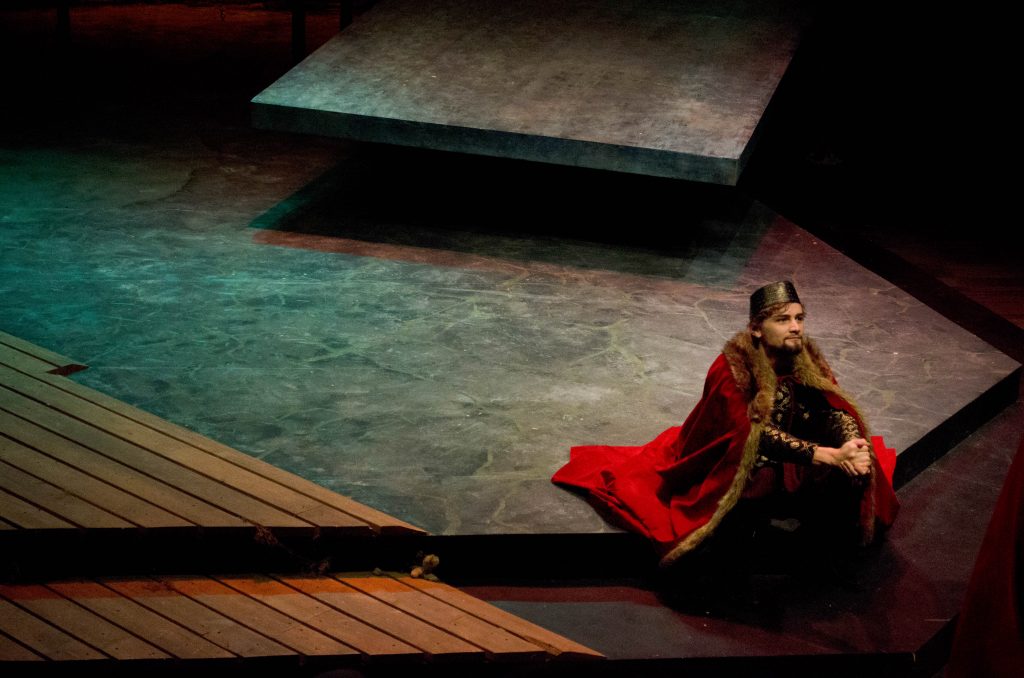 MSUM has been graced by the presence of Scottish royalty.

Director of Theatre Arts Craig Ellingson brought Shakespeare’s tragedy “Macbeth” to Gaede Stage. Having directed at MSUM for 20 years, Ellingson said he’s been thinking about this adaptation since last spring and was very excited to finally bring it to life Oct. 4-7.

He emphasized that the play is “very political” and said he thinks that’s something a current audience would appreciate. He drew a parallel between “Macbeth” and the popular series “House of Cards,” citing both as being stories of “political ambition versus the ability to serve.”

With the heavy material covered in “Macbeth,” it was very important to Ellingson and crew that it was accessible to the audience whether or not they were familiar with Shakespearian language.

“You really have to be physical and emotional,” Katrielle Guida said. Guida had a particularly grueling task as Lady Macduff, who witnesses all her children being murdered before being murdered herself. “It’s very raw and tragic and scary to go through.”

Along with the difficulty of putting herself in such a challenging headspace, Guida struggled with vocal strain from the gut-wrenching scream she’s burdened with during her children’s demise.

Despite the cast and crew’s anxieties, the show did a wonderful job of slimming down this iconic play. The combination of a relatively simple set, the use of theater space, clever sound design and lighting made a versatile backdrop that spans several households, countries and years.

Even with its simplicity, the cast and crew attempted to make each scene and character as recognizable as possible. Battlefields were bathed in red light, monologues featured the iconic spotlight and the passing of time were marked by the sinister hiss of the three witches who prophesized Macbeth’s ascent to the throne. Spirits were marked with bloody eyes and striking red scarves.

Along with the detailed attributes of the performance, another goal was to create uniqueness throughout. One of the more interesting and cinematic effects used on stage was slowing the characters around a monologue speaker instead of having them go entirely still or vacate the stage entirely. This did service to their wish of a modern audience understanding the going-ons of the play without being fluent in the language. It created the illusion of a bubble around the speaker and left no space for misinterpreting the speech as being something all characters were privy to hearing.

“Macbeth” is not only known for its script, however. It’s arguably better known for the superstition surrounding it. Also called “The Scottish Play” or “The Bard’s Play,” “Macbeth” is known in the theater community for being a curse to stages everywhere. Some say that in the first versions of the play, the witches chanted actual incantations, while others say real witches were displeased with their portrayal in the play and so then cursed it.

Most who believe in the superstition now, however, believe that “Macbeth” is only cursed when the name is spoken in a theater not producing the show. Both Ellingson and Guida said they don’t put any particular stock into “Macbeth” being cursed.

“Everyone loves the idea of a ghost story,” Ellingson said, laughing.

Whether or not “Macbeth” is a cursed play, most who went to MSUM’s production agreed that it was done exceptionally. The talented cast and crew created an immersive environment that allowed many people who would in no way call themselves Shakespearian to enjoy an action-packed, heart-wrenching story that had many of the audience taking part in the chant “All hail Macbeth!”

I’m booked: Why homecoming should be moved