As the revelry and giveaways of MSUM’s Homecoming Week closes out, the realities of the university’s financial situation hit full-force again.

Later this month, the University Planning and Budget Committee (UPBC) will have its second meeting of the academic year. At the first meeting on Sept. 13, President Blackhurst met with the UPBC instead of holding her planned office hours. There she approved 13 new staff positions and a $3.5 million budget cut for Academic Affairs. 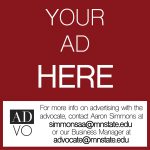 Blackhurst approved budget proposals from last spring’s UPBC proposals and laid out her strategy for the coming year. In May, 15 new positions were suggested covering a wide variety of areas, including new faculty and administrative positions. One of them was recommended by the UPBC, but the committee was hesitant to approve the other 14. However, Blackhurst decided to approve 13 of the remaining positions. Among them is a new dean of students, a new director for diversity and inclusion by 2019, and an administrative assistant for diversity and inclusion for this year.

Dr. Juan Cabanela of the Academic Affairs department said that the other 14, while not part of their recommendations, were adequately supported. Cabanela said that President Blackhurst gave a good argument for her decisions, although he freely admitted that faculty members were concerned about adding new staff members when the university is trying to decrease spending.

“UPBC gives a prioritized list to the administration, not that they will necessarily listen,” professor and UPBC member Theodore Gracyk said during the larger Q&A with faculty and staff. “But we do have full transparency on what’s being proposed, and then the representative of the units (departments) look at those proposals.”

Another major change is the Academic Affairs department seeing a four percent budget cut. As the largest budget at MSUM, using 10 times more of the budget than other departments, Academic Affairs will see a reduction from $40.4 million to $36.9 million, an approximately $3.5 million cut. Blackhurst argued that MSUM spends a much higher percentage on Academic Affairs than comparable universities. Still, for a department covering everything from faculty to tutors to degree programs, that could prove highly significant. While discussions are ongoing, Blackhurst mentioned several potential areas for cuts.

“I will say that tools such as examining the LASC curriculum, our use of adjunct and overload, reassign time—those are all things that are under discussion already,” Blackhurst said. “We’ve also honestly talked about whether using very focused retirement incentives—separation incentives—might be a strategy we would want to pursue. More to come about all of that.”

However, for individual sectors, she said the cuts will not be across the board.

“By no means is it the case that every program or department within Academic Affairs will be cut by X percent,” Blackhurst said. “But those conversations have started, very preliminarily, with the deans and (Academic Affairs) Interim VP (Marsha) Weber.”

Other departments seeing cuts are Information Technology and Marketing. The IT cut will supposedly be balanced by a related fee increase.

“I think that at least some of that reduction will be offset by the technology fee that we recently added,” Blackhurst said. “And so I don’t know that the technology fee will completely compensate for the reduction that you see … but it will certainly help considerably.”

After reducing the Academic Affairs budget, the university hopes to increase spending on Diversity and Inclusion, Enrollment Management and Athletics.

The UPBC is comprised of representative staff from several different departments and handles budget requests that would require new funding from the administration to be approved. The UPBC talks over budget items that will increase the total costs to the university, particularly new faculty positions.

The UPBC holds monthly meetings in the fall and spring, as well as “bookend meetings” with Blackhurst at the beginning and end of the year. Fall meetings are mostly informative, while spring meetings allow each department to propose new staff positions and other items they need approved by the president.

At the last meeting of the year, the second “bookend” meeting, the UPBC discusses positions on all the proposals they will show to the president. They give their professional opinion on which pieces they think should be approved, which ones they feel are unnecessary and, rarely, which ones should not be approved. The president takes their thoughts into consideration when making her budget decisions for the coming year.

The focus this year is getting the university to a financially stable position by 2019.

“We look at it as a process of taking charge of the things we can take charge of,” Blackhurst said. “We can’t control how much money we get from the legislature, we have limited control over our enrollment, (and) really, in many ways, most years we have not much control over our tuition rates. But we do take control of how we spend the money that we have.”

What is done cannot be undone: How Equifax failed America and what you should do about it

All hail Macbeth: MSUM takes on the Bard’s play