Armed with chalk, buttons, dye and enthusiasm, SPECTRUM and its partner organizations flooded campus with activities to bring out the rainbow in everyone.

MSUM’s SPECTRUM hosted events from Oct. 9-13 on campus as part of the annual Coming Out Week celebration. However, the week is/was not just for the LGBTQ+ community, as SPECTRUM welcomed everyone to their events. Whether as part of the umbrella or just to show support for the LGBTQ+ community, all were welcome who have experienced violence and discrimination because of their identity. 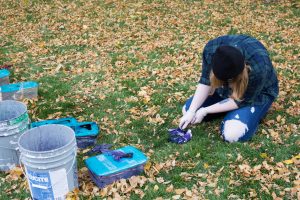 A student attends Wednesday’s tie-dye activity hosted by SPECTRUM, which was part of a week’s worth of events celebrating the LGBTQ+ community and its allies.

“We’re here to be proud and come out and share that we do exist and we are here on this campus,” SPECTRUM public relations officer Jayce Branden said, “but it’s also in finding allies to come support us and have fun with us for people who may not feel comfortable coming to our meetings—who might feel left out in that space. We want to welcome them and be like, ‘You’re a part of this too.’”

Throughout the week, SPECTRUM hosted events such as tie-dyeing, drag queen bingo, button sale booths and Safe Zone training. Many of the events are the same as last year’s, but Branden said attendance has been steady or improving, and there are plenty of new faces.

“Especially with the button sale. There were a bunch of people buying ally buttons or who didn’t have identities that were on the LGBT spectrum, but they would get a button,” Branden said. “I’ve seen people coming to the tie-dye event and tie-dyeing things that I’d never seen before. We also see people who don’t come to the (SPECTRUM) meetings but who we know identify in the community.”

To end on a high note, SPECTRUM worked with the Office of Diversity and Inclusion, the Rainbow Dragon Center and Dragon Entertainment Group to bring in Hayden Kristal, a deaf, bisexual, Jewish, transgender activist and stand-up comedian. Kristal gave a midday workshop entitled “GaySL” that they presented at last year’s Midwest Bisexual Lesbian Gay Transgender Ally College Conference (MBLGTACC). They taught the audience American Sign Language (ASL) signs for lesbian, gay, bisexual, transgender and queer, as well as more complex terms and definitions, such as coming out.

“It was really great to just bring Hayden in. Kari and I saw Hayden at MBLGTACC … so we brought them back,” Branden said. “And it seems like everyone enjoyed it, had fun, laughed, learned some things and learned a lot about intersectionalities as well.” 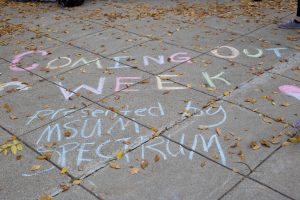 SPECTRUM members and others chalked campus sidewalks in celebration of Coming Out Week on Wednesday. The events had good turnout, including several people not directly affiliated with on-campus LGBTQ+ organizations.

Kristal has spoken at many colleges and conferences all over the country. Their public speaking focuses on the intersectionalities of disability and sexuality. They were also a Nashville semi-finalist in the 2016 StandUp NBC contest, which seeks to recognize diverse comedians from across the country. Several workshop attendees were surprised at just how funny Kristal was.

“It was a lot funnier than I expected,” said Maggie Christie, an alumna who graduated last winter. “I was expecting, I guess, a more dry class, but I loved the fun interactive nature. I thought Hayden was an excellent teacher.”

Kristal also discussed how they changed their perspective of intersectionality by realizing that the parts of ourselves we leave out are just as important as the pieces we recognize and celebrate.

“It’s always important to keep in mind that perspective, just because I think that a lot of focusing on one aspect of a person’s identity can be … the main focus,” said Brianna Bradley, an MSUM senior and a member of Dragon Entertainment Group, which helped bring Kristal to campus.

At the end of Kristal’s visit, they performed a stand-up comedy performance on Friday night. The organizers expected a wider audience at the comedy show because it is much more approachable than a formal workshop.

“I would definitely say that people are more open to going to comedy shows because comedy shows kind of have that feeling of you don’t know what to expect, so people are just more willing to show up,” Branden said. “Workshops are more on a person-by-person base, so everyone gets a good amount of attention, where in a comedy show, the lights are off, you are not the focus, you won’t be asked questions at all—it’s solely for your entertainment.”

After Coming Out Week, the Rainbow Dragon Center will be hosting a Safe Zone booster session called “Surviving the Holidays after Coming Out” on Nov. 20 and several other events in spring semester.

The sky is the limit