In 1690, Benjamin Harris published the first newspaper in the American colonies, titled Publick Occurrences Both Forreign and Domestick.

A lot has changed since then, and the world of student journalism has changed too—including MSUM’s newspaper. 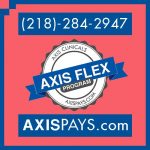 On Dec. 12, 1924, The Bulletin became the first issue of any newspaper produced for MSUM, then named Moorhead State Teachers College (MSTC).

From 1924 to 1925, The Bulletin kept students informed on the happenings in school. It featured stories such as “Dramatic Club Christmas Play,” “Basketball” and “Y.W.C.A. to Pack Christmas Box.”

There was also an option for students to subscribe to The Bulletin to receive a copy of it right on campus, which allowed the club to make money to cover printing costs.

But as the times and campuses change, publications need to as well. 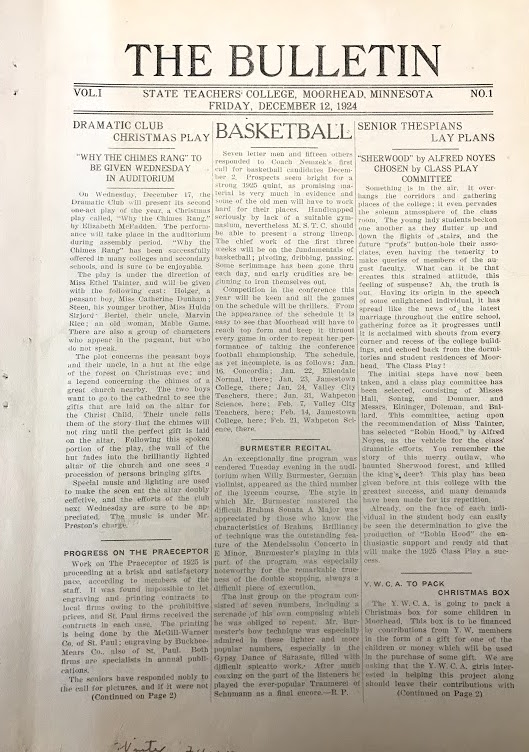 All photos taken by Emma Vatnsdal with help from the MSUM archives.

In 1925, MSTC presented their students with the opportunity to vote for a new name for the campus newspaper. Suggestions trickled in, and The MiSTiC made its debut May 1, 1925.

Other names that almost made the cut included The Ped-O-Meter (the school was known as The Peds during this time), The College Bugle, Clarion and Trumpet. 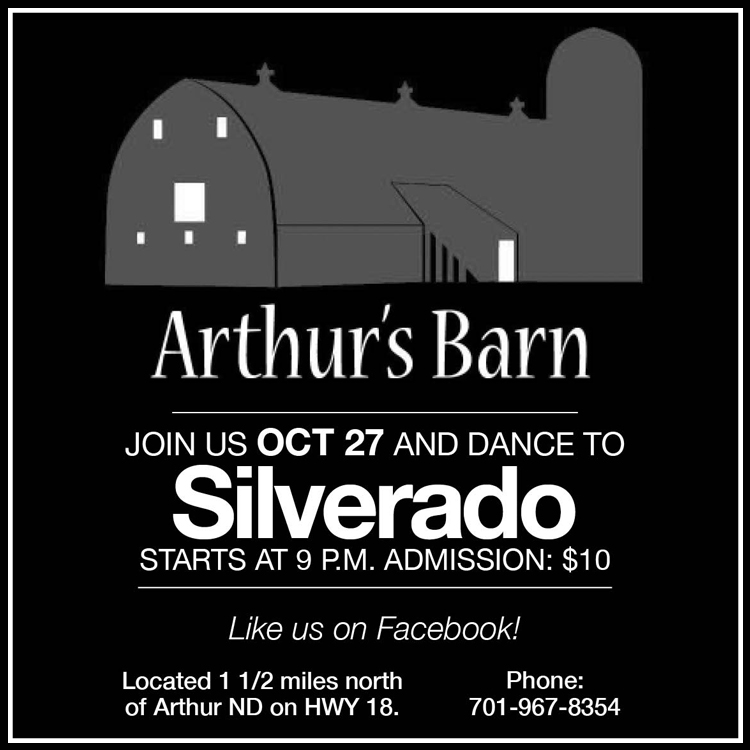 However, the student-run newspaper at the college went through another change in 1931. The MiSTiC was transformed into The Western Mistic for 33 years, but it reverted to The Mistic in 1965. This coincided with protests surrounding the Vietnam War.

Students began to fully exercise their right to free speech, and by 1967, they were thoroughly protesting. President Rolland Dille, as well as several other staff members at what was then named Moorhead State College (MSC), called for a re-evaluation on what sort of events and articles The Mistic could cover.

These issues boiled down to two things: the use of profanities in editorials and the coverage of certain events and issues. Already riled up, students felt the college staff, including Dille, was trying to censor their ideas.

The final straw came in May 1969 with nothing more than a printing error. When the publisher delivered copies of the May 2 issue, members of the staff noticed that the wrong photograph had been added to a particularly controversial article.

In the story, several four-letter words were used freely while attacking Student Senate for its support of a censored magazine produced by the English department.

After a long series of incidents, The Mistic was suspended and ultimately shut down by Dille.

“Because I do not now have confidence that future issues of The Mistic will serve the ‘general welfare,’ I find myself with no alternative but to suspend the publication of The Mistic until such a time as this confidence has been restored,” Dille wrote in a memo to the editor-in-chief.

However, this did not stop journalists at the school; students began publishing The Mystic independently on May 9, 1969, one week after the controversial issue of The Mistic brought President Dille to suspend it. 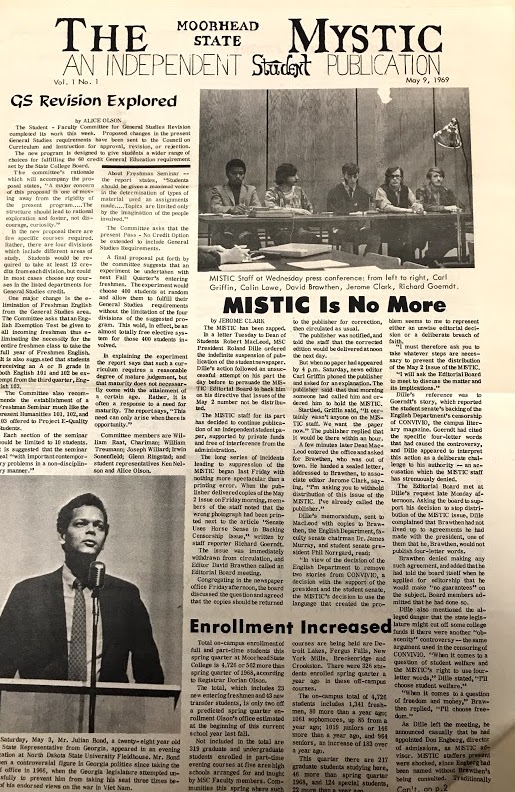 The Mystic, only one letter different from the suspended The Mistic, was produced by the original staff without using funds through MSC—first working in a garage and later moving into a house.

Katherine Tweed, a student at the time and a journalist for The Mystic, described it as an exciting time for the paper.

“We moved to a house just north of campus,” Tweed said. “There was a time when we were all paranoid that the cops were going to shut us down, since we were not working at the school.”

In 1970, after a year of operation independent of the college, rumors of the newspaper coming back to MSC began to surface. In an article written for The Forum, Dille stated that Student Senate officially asked for The Mistic to be brought back for the 1970-71 school year.

“No one has given up the idea of an independent student newspaper entirely,” Dille said. “But the experience with it this year was a financial failure.”

In March 1971, President Dille signed a contract to unify college students on all three campuses—MSC, Concordia and NDSU—into a more cohesive body.

This new independent school newspaper, known simply as The Paper, was a collaborative effort among the three colleges and was headquartered at MSC. The Paper was published biweekly and focused on all three campuses, exposing students to more information than they would normally get with three separate newspapers.

Both Moorhead Independent News and The Paper had financial difficulties and died due to lack of student interest.

Through 12 months and three name changes, members of the independent papers decided that any successful newspaper must have financial support of the college and professional aid from the Mass Communications Department in order to survive. This led to yet another discussion of bringing a newspaper back to MSC.

Negotiations for the return of this paper began during the spring semester of 1971. After much debate, the administration agreed to Student Senate’s recommendation for an on-campus paper, but not without reservations.

First, the Mass Communications Department said it needed a full-time advisor to work with the paper to teach students the proper way to create a publication. Second, it demanded a guarantee of control for editorial content. These stipulations ensured the paper would be a teaching and laboratory experience for the students.

In September 1971, a college-aided paper was brought back to MSC under the name The Advocate. 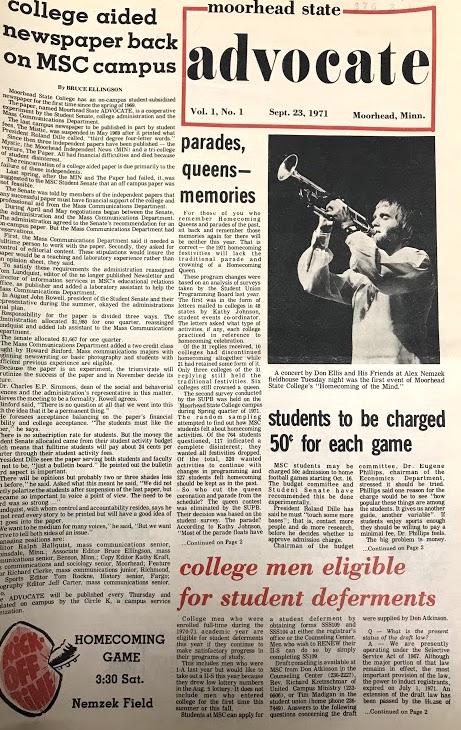 As with any new publication, there was a learning curve. In the beginnings of the new paper, small incidents helped shape the students into professionals. Tweed, the first copy editor for The Advocate, remembers one incident in particular.

“I wrote an article about the Native American club on campus and started getting angry responses to it. They wanted to shut the paper down,” Tweed said. “It all came down to a comma. Without reading the comma, the entire meaning of the paragraph had changed.”

Small printing incidents like this helped the journalists be more careful when writing their pieces.

A lot has changed in the 93 years that the student newspaper has been—and not been—on the campus.

From its humble beginnings in 1924 as a campus bulletin board to the fiery protests and search for independence and freedom from censorship in the 1970s, the newspaper on our campus has been through some dramatic changes.

However, through the plethora of changes, one thing has remained constant: student journalists’ pride in their work.

“I still fully believe that some of the best journalism came out during The Mystic,” Tweed said. “All of the writers were so passionate about their platforms.”

With the digital generation coming to our school, The Advocate has moved primarily online, providing students with news at their fingertips. Even through the transition to a predominantly online publication, students’ pride in their work will not go away.

Frights of the night: Planetarium scares students with new show

Advising advice: Because some of us learned the hard way