When universities imagine their futures, it involves less hoverboarding and more resurfacing pavement. And in 2010, when university officials were dreaming of a better future, they had big plans: doubling the size of buildings, reconstructing landscapes and knocking buildings down. Some of those dreams came true, but many others are doomed to fall short.

Some of the biggest successes of the plan were in improving safety. The plan repeatedly stressed that many areas needed additional markings to protect pedestrians, and many of them have actually been put into place. For instance, the prominent double stop signs on 14th Street were a result, as well as the crosswalk markings by the main gates at the west end of campus. The university also installed new three-way and four-way stops to slow traffic in problematic areas. Given the heavy flow of traffic as students come and go from class and campus, these were very important safety investments.

Remodeling efforts were also very successful. MacLean was restructured to add the on-campus post office, the library was remodeled and many residential halls saw a complete overhaul.

Other changes were more ornamental. The iconic “Sown” acorn and cattail sculpture in the middle of the campus mall was one of many attempts to beautify the university’s open spaces. This is where the ideas got overly ambitious. 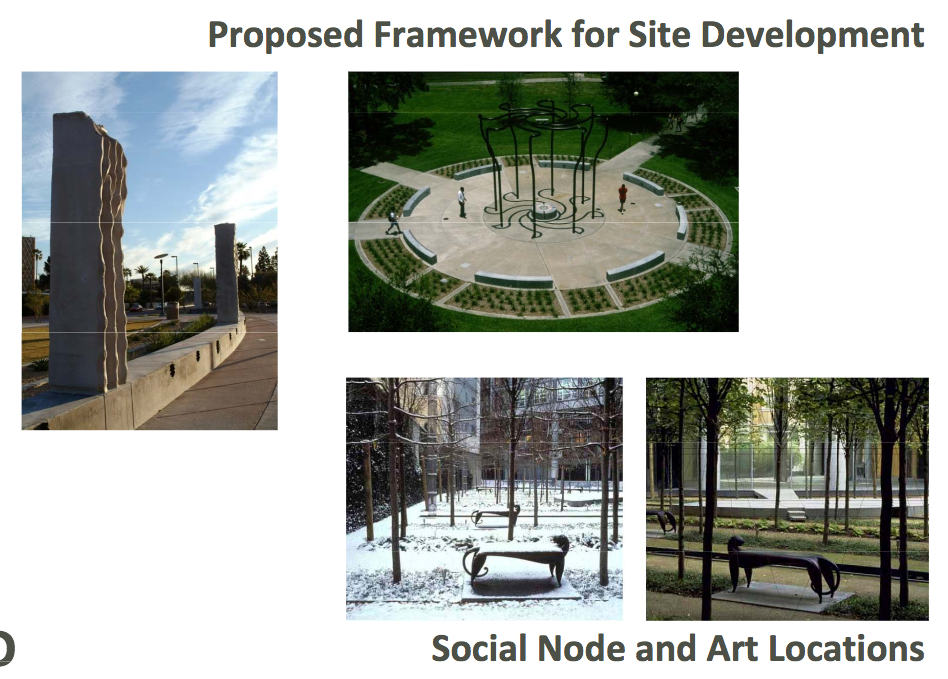 These pictures were the inspiration for “Sown” and other art sculptures on campus.

One target for social spaces and art was in front of the West Snarr entrance on 14th Street, which currently contains a bus stop and a popular nighttime smoking spot. Another was the space between the library and Kise, where most students cut through the grass; by the side of Nemzek, which is currently a fenced-in maintenance shed. A third was in the open fields by Holmquist, which are still open fields. These areas are a far cry from the beautiful gathering spaces the university intended.

At least with the sculptures, some designs succeeded. Other ideas, like ornamental benches, never saw the light of day. The benches shown in the 2010 site evaluation photos are the same ones we have today. The only major change in seating was the removal of some square picnic-style benches in front of the library. They were replaced with patches of prairie grasses on one side of the library porch. Now, many students wonder why those grasses are stuck there—a tiny piece of prairie in the midst of concrete and traditional bluegrass. 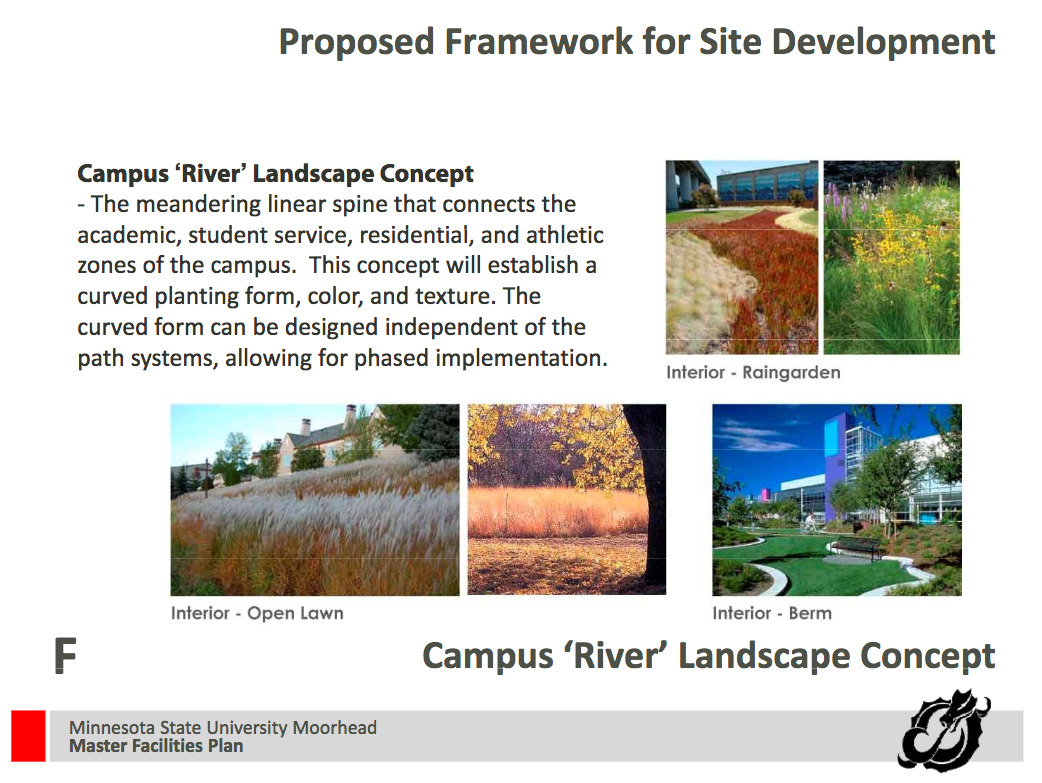 In the plan, university staff envisioned an overhaul of the university’s greenery. They dubbed it the “Campus ‘River’ Landscape Concept.” The idea was to have a “meandering linear spine that connects the academic, student service, residential, and athletic zones of the campus.” In a community famous for the Red River, MSUM would have a united curved pathway that guests and students could follow throughout campus, leading them to the most iconic parts of the university. It would be surrounded by high grasses and natural vegetation as homage to our prairie heritage. This would be our very own Yellow Brick Road for every campus tour, every special event and every new student orientation.

Does it sound too good to be true? It was.

For a university reliant on fluctuating enrollment rates and state funding, it was inevitable that such an ambitious project would be put on the back burner. 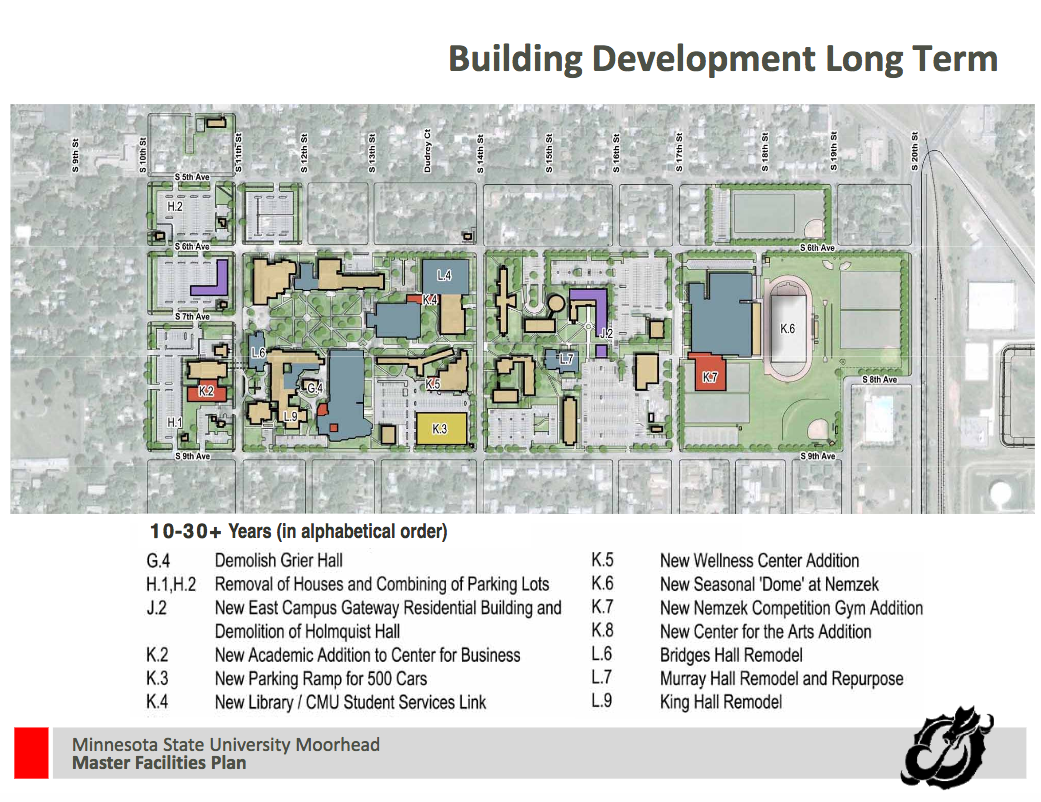 The scale of the master facility plan went well beyond a typical five- or ten-year timeline. In the long-term area of the plan, the priorities for the next 30 years were listed. The first on the list? Destroying Grier Hall, the small building between MacLean and the Center for Arts that holds Marketing and Production Services. The university intended to put a new social gathering space or new landscaping in the area in place of the worn parking lot.

Other major priorities in the long-term were demolishing Holmquist Hall, building a Center for Business addition to double the size of the facility and constructing a 500-car parking ramp.

Realistically though, for a university that is cutting professors and reducing the budgets of dozens of departments, it seems hard to believe MSUM will suddenly have thousands of dollars to spend on these kinds of improvements. So, like a New Year’s resolution, it seems these plans are more likely to stay a pleasant dream than a solid everyday reality.

If you want to read the 2010 master facilities plan for yourself, check it out here.

Tick tock: Why daylight saving is a waste of time