Bitter wind blew the heavy snow around Monday night, but the CMU held a much warmer feeling as Red Weather, the campus literary magazine, held a poetry slam and open mic night.

At 7 p.m., the CMU Sun Garden Lounge was packed tight, with the second-floor balcony full and only standing room left on the main level. Throughout the night, people on their way out of the CMU or coming in from the chilly weather stopped to listen to the passionate speakers.

Freshman Jarrett Olek, a passerby, was drawn to the event’s welcoming atmosphere.

“I thought it was really cool that this many people had gathered to listen to poetry on a night that there was a basketball game and so much other stuff going on,” Olek said.

The evening consisted of poetry readings, live music and an open mic portion at the end for anyone to come forward and read something they wrote or liked. From poetry about self-recognition and lost love to first kiss stories and even the epic battle of “Beowulf” told in traditional Old English, the night included a wide variety of topics and emotions.

“I think that everybody heard some cool poetry that night, and a lot of people are better off for it,” Olek said. “They heard some important messages that are relevant, and they also heard some really cool famous poetry that’s great to know.”

The open mic portion of the evening began with just a few brave souls venturing on the stage, but it ended up having more speakers than expected.

“I really liked the fact that anyone could go up there,” Olek said. “Because someone like me that didn’t really know what was going on would have felt like they could go up there and start sharing.”

One after another, people including Olek shook off their nerves and decided to speak. Some shared old writing homework assignments, while others vocalized their own thoughts and feelings. Many started their introductions with, “I didn’t plan on doing this tonight but … here we go.” 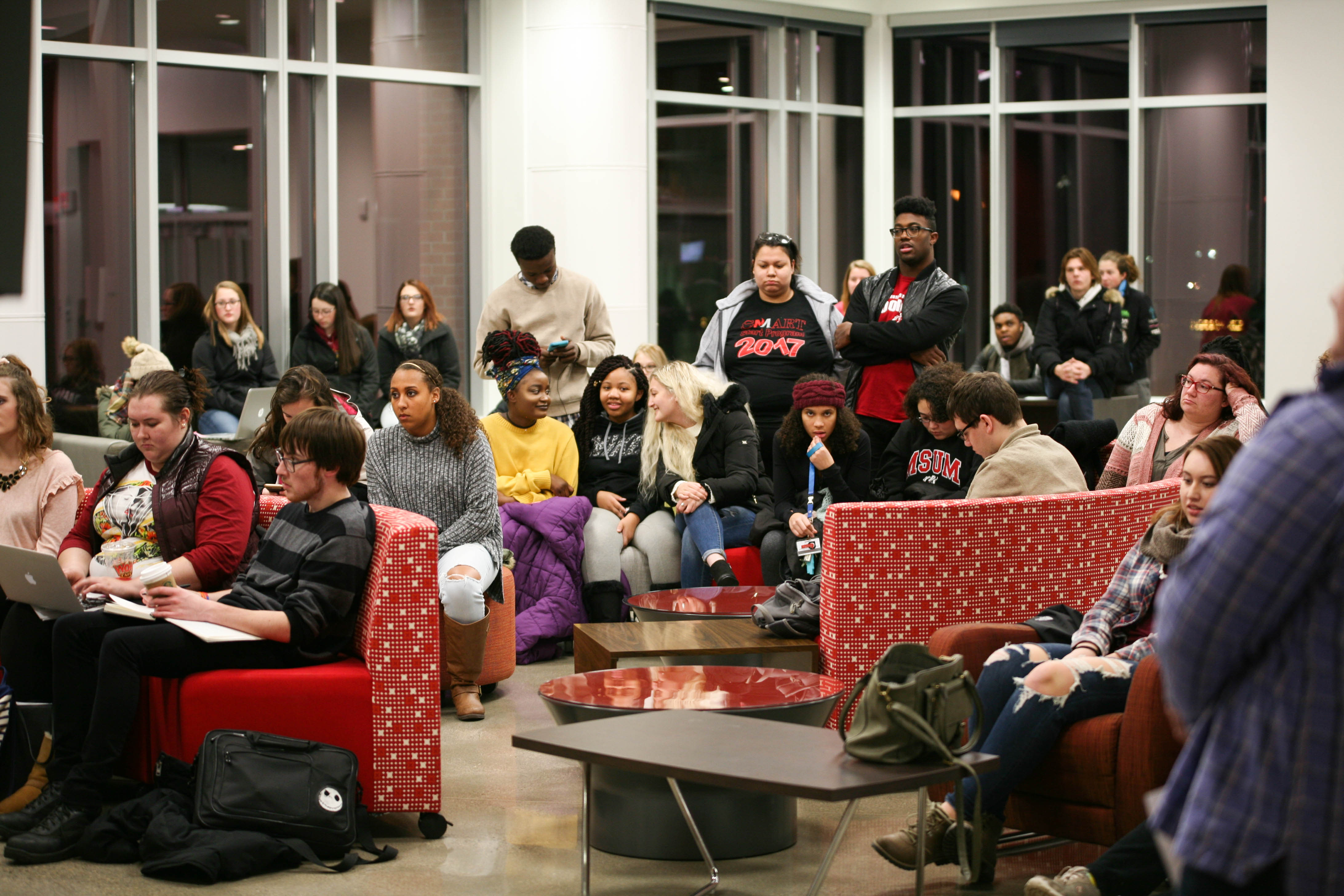 Students listen to their peers share poetry and music at the Open Mic Night on Nov. 6.

One of the open mic readers was freshman Hannah Stelter.

“(The event) gives people a place to express themselves, so it’s definitely an event that’s worthwhile to have on campus,” Stelter said. “Especially for people who enjoy poetry but maybe don’t have the courage to go up, the more often that they have (open mic nights) here the more likely someone is going to be willing to go up and speak.”

As the night came to a close, the couches emptied and the cookies slowly disappeared, but the words and emotions everyone heard and felt didn’t.

“I love open mic nights,” Stelter said. “They’re one of my favorite things to go to.”

Stelter hopes to see another event like this in the future, and she’s not the only one.

“I love poetry,” Olek said. “I think we as a society don’t put enough emphasis on it, and it’d be great to have more events like that around MSUM.”

Boots made for serving and schooling: Campus veterans thriving at MSUM