In a boisterous room of the CMU, students are deciding the fate of the world—or at least they’re trying to.

On Nov. 4-5, 18 students from MSUM’s Model United Nations (MUN) met for their first ever on-campus conference in the ballroom. This conference served as a dry run for the club’s many first-time members before bigger conferences later in the academic year. 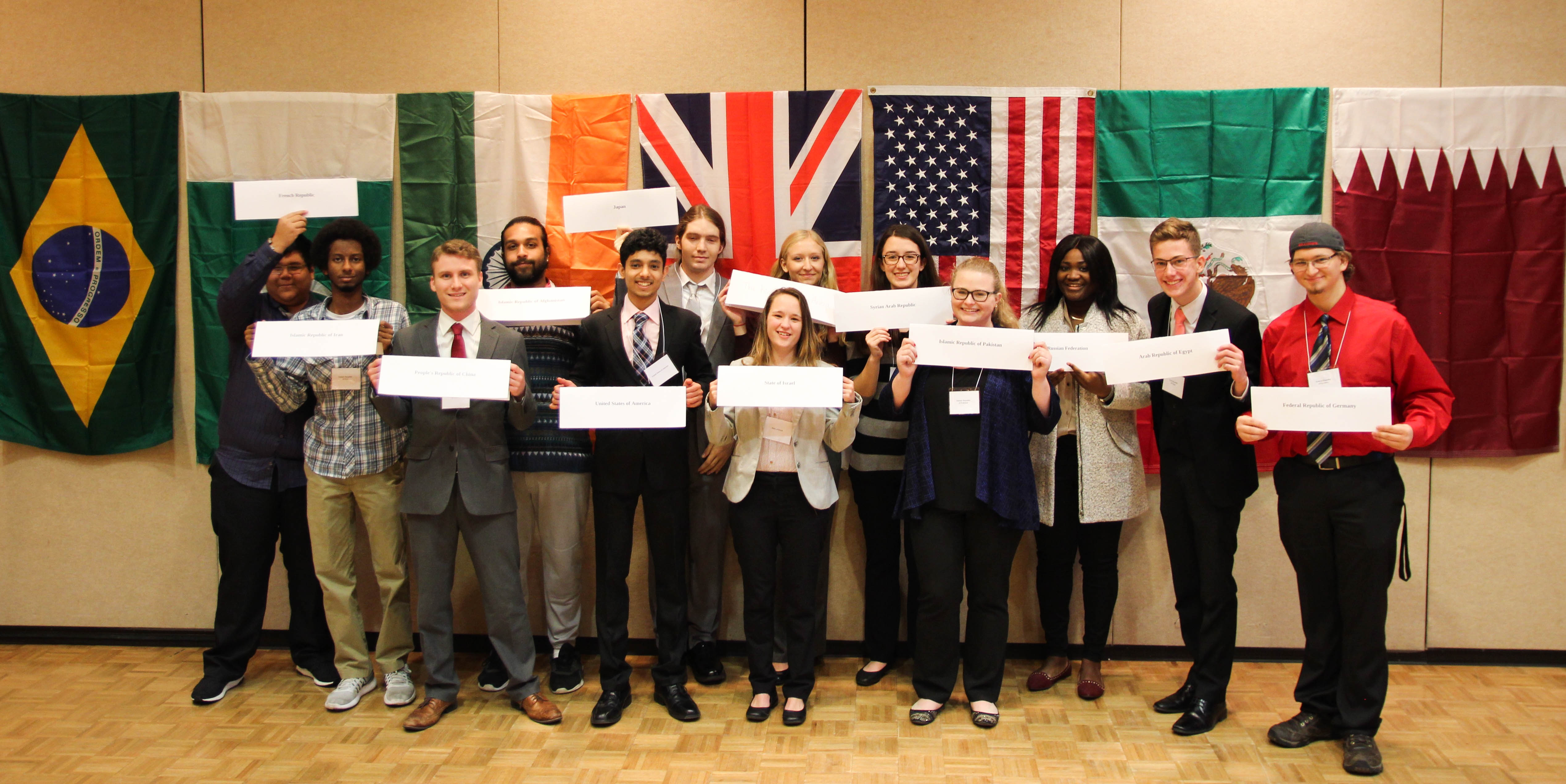 “Today they took a little while to warm up, but once they warmed up, I think they did as well as any other student(s) I’ve seen do this,” David Kujawa, the conference chair and former MUN president, said. “I think they’re doing well, I think they’re learning a lot, and I hope to see them continue to do well.”

The delegates, representing different countries from the UN, gathered to write, debate and modify resolutions and amendments on pressing current issues. Although the delegates use parliamentary procedures and terms, the members also seemed to enjoy their time. Between the rounds, there were jokes, cookies and camaraderie.

Besides the general resolutions, the delegates also practiced their committee work over the weekend in the social, humanitarian and cultural committee. The discussions got a little fiery as the delegates worked on refugee policies, which was one of the most hot-button issues of the conference. Eric Thibert, a new MUN member and delegate for China, said that when delegates act how their nations would, it can be hard to find a compromise.

“Everyone here getting into the character of their country, trying to represent their position passionately—it does get kind of heated on an issue like (refugees),” Thibert said.

However, the more experienced members stick closely to their country’s foreign policy no matter how tense things get.

“I think of myself as going under a veil, and it’s like, ‘OK, I’m Israel,’” MUN vice president Marie Ziegelski said. “I know that other countries like to go out of the box and be like, ‘Well, in order for this to pass, we need to form a coalition, and I’m willing to go rogue from my country’s foreign policy in order to do it.’”

Despite the high number of new club members, she said she was not disappointed by the outcomes of the event.

“We were concerned that we weren’t going to have enough debate and discussion, but I was very impressed.”

For the students, everything is a learning opportunity in diplomacy. Kujawa said that one of benefits of the club is broadening the educational experience for its members.

“It helps students understand different nations across the world, which I think that a lot of our education is sorely lacking in nowadays,” Kujawa said. “When they’re able to act out representatives of a certain country, they’re better able to understand why countries do the things they do and what kind of interests certain countries have in the world and international relations.”

The club officers hope to eventually expand the conference beyond just the MSUM members to other MUN teams around Fargo-Moorhead and beyond. Since this year’s conference went well, the officers are building their hosting experience in preparation for future years. They hope to have a smaller version of the regional Arrowhead conference, which moves around the Midwest each year.

There are MUN clubs at neighboring schools and throughout the state, so there should be enough teams to collaborate with in the future.

“I know that NDSU had a team for a while, I know UND does, (and) Concordia would probably definitely be interested in (it), especially with their language villages,” Kujawa said. “When we go to Arrowhead, it’s packed. There’s hundreds of students there participating in Model UN. So there’s definitely a lot of interest.”

Thibert said he was excited for future conferences, and he was optimistic that MUN can expand its presence on campus.

I’ve really liked what I’ve seen,” Thibert said. “If the organization of the activity is popularized on campus, if more people are made aware of it, there’d be a lot more interest. … The biggest part of getting more people involved is just letting them know that it exists and that it’s here.”

Can you dig it: Vega finishes season top-10 in digs