At the time of the doubleheader’s first pitch, the temperature flirted with 40 degrees but eventually fell to a near-freezing level.

It was not warm, but after 26 games on the road, the Dragons’ home opener was played without delay on Scheels Field. 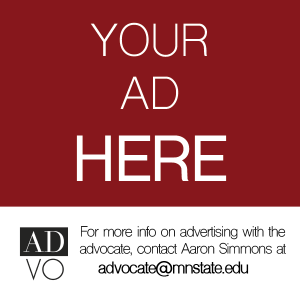 MSUM was the first to tally a run in the bottom of the second inning.

After a Lexie Kennedy single and an infield error by Minot State that sent Kennedy to third and Becky Berth to second, sophomore Emma Dummer brought Kennedy home with a single to left field.

Immediately, Minot State responded during its second trip to the plate. With two outs and nobody on base, the first five Beavers in the order reached base safely.

As part of her four-hit, three-RBI game, Kyla Larson’s center-field single brought in Julia Suchan and Lauren Cowden to take the lead. Minot State added another run in the third on Isis Cabral’s single.

In the bottom of the fourth, MSUM tied the game at three when Dummer launched a two-run home run over the left field fence. Dummer’s three RBIs was the extent of the Dragons’ game-one offense, as no runner advanced past second after the fourth.

Minot State added two runs in the fifth and the seventh to win 7-3.

After striking out all three times in the day’s first contest, senior Aunica Novacek stole the show in Game 2. She was involved in all three scoring plays for the Dragons.

In the third, she hit a leadoff double off the left-center field wall. She moved to third on the first of Elizabeth Johnson’s two hits and was brought home on an Ashley McCance sacrifice fly.

In the fifth, her one-out, solo home run tied the game at two.

Novacek wasn’t done yet. With two outs in the bottom of the sixth, she launched a grand slam that over the center field fence to give the Dragons a four-run cushion.

The first game scheduled in Moorhead was to be played March 27 against Northern State, but was postponed. Due to a lengthy winter, wet conditions and seemingly never-ceasing snow, MSUM has been unable to play on their home field.

A portion of their home games were moved to the Presentation Dome in Aberdeen, South Dakota.

Twenty-six consecutive times, MSUM played a game away from Moorhead. Finally, they don’t have to travel to play softball.

Kennedy, who is a junior transfer from Dakota County Technical College, doesn’t mind the constant road trips, but being able to get ready in their own locker room is quite the perk.

“We got to warm up in our own area, we got to listen to music in our locker room, and we basically got to take our sweet time,” Kennedy said.

The last series scheduled for MSUM is April 29 in Fayette, Iowa against Upper Iowa.