What to expect: A preview of MSUM theater

Whether you are an avid theater-goer or not quite sure where the theater on campus is, you’re going to want to keep an eye on Hansen Theatre’s box office this year.

There are seven performances scheduled to be held by the MSUM University Theatre Series. There are main stage performances as well as some that are student-produced; also included are two annually held dance concerts. Morgan Kempton, a junior majoring in music and theater, is a former secretary of the Theater Club and is working with the department this year as well. She is involved with choreographing performances and networking with other directors to set up workshops.

To kick off the year, the first performance will be in line with a campus favorite fall sport – football. The drama show is even set up similar to a football game, with fifteen-minute quarters and a half-time show. The performance will play over homecoming week at MSUM. Aspects of the game are mixed with challenges faced throughout life, demonstrated with dancing, music and full-contact choreography. “Colossal” will be held Oct. 3 though the Oct. 6.

Keeping with the sports theme, the end of February holds the spotlight on a girls soccer team in the production “Wolves.” They put their focus on the game at the top of their list, while addressing challenges faced in this all-female-cast show.

Kempton is assistant stage manager of “Colossal” and plans on auditioning for “Wolves.”

“This year I think it’s really cool that were doing athletic-based shows,” she said. “I thought it’d be cool if it was possible to get people from the football team and the soccer teams interested in coming.”

She and Elizabeth Evert-Karnes, the managing director of the Center for the Arts, hope to broaden the audience with different subject matter.

“Strangely enough, there’s a lot more crossover than people think of others who attend athletic events and people who attend arts events,” Kempton said. “So I think people will find the shows that we’re doing very interesting.”

Following “Colossal,” Hansen Theater will hold a gift for the young-at-heart visitors. The “Cat in the Hat” production is the children’s show this year. Kempton will be part of this production, although she says it’s a heavy workload. 30 to 45 minutes per show, two shows a day, running for two weeks. They will also be having a free show in mid-November for the public. Kempton said the show sold out last year, and they are hoping that becomes a trend. 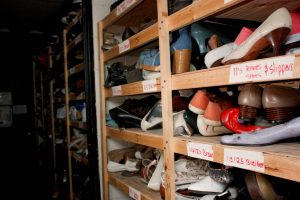 Next Spring, watch out for a concert version of the musical “Hair.” Kempton said the show will be run differently than a traditional musical, with people walking up the microphone and singing.

Another performance is the show “Reefer Madness.” It is based on a Public Service Announcement film that was shot in 1936. Evert-Karnes linked it to the topic of marijuana legalization, and wonders if “some of that population will come and see the show.”

“Reefer Madness is a really interesting piece,” she said. “It will lend an interesting point of view to that conversation”

There are also two dance shows throughout the year. Kempton explained that the shows are almost like end-of-semester finals for the dance students. This “final” includes dance classes like Dance For the Stage, Ballet and Dance Production. At the end of the year they will be collaborating with the percussion ensemble, including some African drum dance routines.

“We’re in the Hansen this year,” Kempton said, “so we’ll all do a bunch of dances and kind of ‘show off’ what we’ve been working on.”

The two dance concerts will be at the end of each semester. The concerts are student-run, with student dancers, choreographers and light designers.

Kempton enjoys the student involvement opportunities she sees around the department. One person she really admires is Craig Ellingson, a professor at MSUM and department co-chair in the School of Performing Arts.

“Craig Ellingson really tries to make it hands-on for students,” she said. “He really lets you put your input in during shows.”

Ellingson isn’t the only one who supports heavy student involvement.

“All the professors work really hard to try to incorporate what you learn in class to put it into the rehearsal processes,” Kempton said. “They make it really easy to communicate with them.”

Kempton, Evert-Karnes and others within the theater department are hoping to attract people outside of the theater community with the variety of shows they are doing this year.

”We always hope to bring a whole bunch of people to campus, community members and otherwise,” Evert-Karnes said.

More information and ticket purchase for all upcoming shows can be found at https://www.mnstate.edu/university-theatre/

Letter from the editor: Looking forward to this year

Why Advise?: MSUM begins advising, and you need to prepare