The smell of sweat.

The squeaking of slipping shoes.

The roar of the crowd.

Many students competed in Dragon Ninja Warrior, an event sponsored by the Dragon Entertainment Group, on Fri, Sept. 21 in Nemzek Field House. 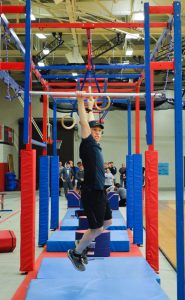 The event was based off of the NBC show “American Ninja Warrior.” During the show, competitors run through a course to test their agility, speed, grip strength and upper body strength throughout a course of increasingly difficult obstacles, ending in a 14-foot warped climbing wall. The competition in Nemzek started with 33 male and nine female competitors, with some signing up at the very last minute. There were a few differences between the show and the event; the warped wall was shortened to 12 feet and there was a pad to land on instead of falling into a pool. 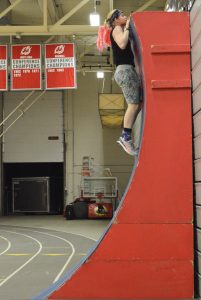 One competitor, Ace Steele, didn’t have high hopes. “I’ll probably fail miserably,” she responded when asked how she thought she would do. She then went on to get second place out of the female competitors.

Throughout the competition, the audience and competitors cheered each other on, almost forgetting about the competitive aspect. Everyone cheered when a student made it to the top of the warped wall or salmon ladder, and the audience took a collective breath when someone had a hard fall.

“It could have gone better, but I still had fun. I think I found my new weekend activity,” competitor Jacob Balken, a sophomore animation major, said. After competing, he plans to train and wants to find more opportunities for competitions like this one.

“Of course I had fun, absolutely,” Balken said. “I would jump back in if I could.”
This was the consensus of many of the competitors. That they had fun no matter their points or time, they were just happy to compete and come together as a community.

Many heard about Dragon Ninja Warrior through posters or the CORQ app.

“Why not give it a try,” Brandon Heim, a sophomore English/Mass Communication major said. “Might as well see how I can do,”

He described himself as “not physically inclined,” even though he completed four out of the six obstacles his first run-through. Despite this, he was still upset with his performance because he thinks he went too fast. He hopes that he can do the course again sometime and would go through it “20 more times if [he] was able”. When the competition was completed, Heim could be spotted sitting on top of the warped wall.
Many students came to compete and even more to support their friends and watch. Three prizes were given out, but all competitors went home feeling like they had done their best and given it their all.

With Warnings about a Level 3 Sex Offender near Campus, Public Safety Talks Security