MSUM homecoming celebrations ended the week with a bang, or more with a bounce, this year.

Students and residents of the Fargo-Moorhead (FM) area are able to experience some lighthearted and lively art over the next few days. The #RedBallProject is a traveling art piece by artist Kurt Perschke. With a long history and an extensive list of previous visits, this traveling art piece is not one to miss.

The ball is named “the world’s longest running street art project” and has been to over 30 cities on four continents for the last 17 years, according to Mike Faba, the production manager of four years for the project.

Not only is the art a specialty in itself to the community, but the location is a first for the project as well. Faba said this is the first time the ball has visited cities that border each other so closely.

This was the key aspect that brought the artist in to the FM area. According to Brad Bachmeier, professor of art education at MSUM for 10 years, the idea of a border city piqued Perschke’s interest when Bachmeier contacted him.

“I told him about our area and the fact that we’re this border city with a river in between it. I think all of that interested him,” Bachmeier said. 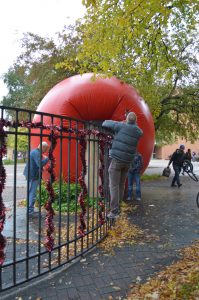 After the initial idea, it was time to find partners to fund the project. Bachmeier said that it didn’t take long, with help from the City of Fargo, City of Moorhead, Fargo Arts and Culture Commission, Fargo Parks and Rec. and more.

“It came at a really interesting time because the new dean of the School of Arts, Media and Communication, Earnest Lamb, was a supporter of public art and I think he was really excited about it right away,” Bachmeier said. “Then we met with President Anne and she immediately wanted to know how we can become a sponsor and was excited about it.”

Once sponsored, the artist always does a site-visit to prepare for the art project.

“We try to walk down every street if possible and look for the best locations, [Perschke] and I work together to figure out the best way to do it,” Faba said. “Then I handle all of the logistics and the installation and deinstallation.”

The locations the artist chooses are mapped out long before anyone else in the community is told. Bachmeier said that the art focuses on how it interacts with the architecture giving people opportunity to have interaction with it.

Bachmeier is not alone in anticipating the arrival. He said he had contacted other art educators in the area. One elementary art teacher had her kids draw the ball where they imagined it might go. She bought a ball and stuck it in her door, so the kids walk under it everyday as a reminder. Bachmeier also asked the Early Childhood Center to bring the preschoolers over.

“What’s it going to look to like when 20 or 30 little 4-year-olds see that ball and start interacting with it?” Bachmeier said. 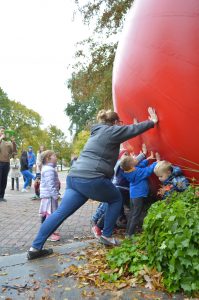 Bachmeier was able to see the excitement on the preschoolers faces when they came marching across the mall towards the art, bouncing themselves off the giant red ball.

Bachmeier said having the project here for homecoming was a “lucky accident”, as they had to choose a week before the snow hit; and he has high hopes for this project.

“Around here people aren’t that familiar with public art or are maybe a little bit scared of it…or aren’t sure what it is, or if they want to spend money doing it,” Bachmeier said. “This project just seemed to be a really excellent fit because it’s fun and whimsical and temporary, so if people don’t like it it’s not staying.”

Bringing people together with an interactive and amusing attraction is one of the goals for the local art community supporters and Bachmeier.

“Public art takes many forms it doesn’t have to be just a mural. Presentations or temporary art can be public art also,” Bachmeier said. “Get rid of the fear and the stigma and just have a fun experience with it, so that people maybe want more, or at least are interested in it.”

Mexican Food Serves Up Knowledge and Perspective for Students