Growing up, drawing had always been a part of Franklin Ugochukwu’s life. But not until traveling from Nigeria to Minnesota did he consider drawing to chart the path to one of his passions in life.

Ugochukwu started college knowing he liked drawing, and that led him to the studio arts program. An international student, Ugochukwu is now in his fifth year at MSUM. A couple years ago he changed his emphasis from drawing to painting. Along with painting comes the stereotype that painters pull from personal or perceived darkness or negativity. While Ugochukwu has painted darker elements, he tries to steer far from that stereotype.

Avoiding the dark stereotype is easy because Ugochukwu’s life philosophy is the opposite.

“There are just a lot of bad things going on in the world anyways, so anything you put your hand on or anything you do should just be positive in a way where it enlightens someone else,” he said.

As an artist and international student, he’s experienced the good, the bad and the ugly. Moving from one nation to another is no easy task. He had to learn to navigate his way through a new culture and community, observing what was and wasn’t expected behavior. His acclimation was made easier by having attended boarding school and experiencing homesickness two years before college.

Having lived in two countries, Ugochukwu noted negative aspects of both Nigeria and the United States. Still, he knows there’s a lot of positivity a person can focus on, and he shares this through his paintings. 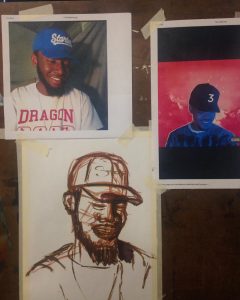 Not only does he show his positivity through his actions, but also through his colors. One of his art professors even noticed a certain color palette unique to Ugochukwu’s art. The palette is full of reds and oranges, which are usually bright and shiny. Growing up in Nigeria, he watched the colorful sunsets almost every night. These vivid sunset memories affect his palette and add bounce to his positivity.

“Somehow those colors just get engraved in your brain,” Ugochukwu said. “Which is crazy living here where half of the year everywhere is white with snow. You see no color for half a year.”

At the end of 2017 his African roots and painting skills sparked his first commissioned set of paintings. A friend and her family, who own the new restaurant Spice Grill in Moorhead, Minnesota were thinking of hanging African artwork in their restaurant. They were considering African art from amazon.com. However, after discussing with Ugochukwu what they were looking for, they decided, instead, to commission artwork from him.

For three to four months Ugochukwu made sketches to begin the process, then created the paintings, and even constructed frames by hand and framed the paintings. Everything was made from scratch, giving him a greater sense of accomplishment from the work. Some of his artwork can also be found in the MSUM dining center, Kise Commons.

He loves all his artwork and derives immense joy from it. He doesn’t want to keep the joy to himself. His artwork has served him already for what he needs.

“I let it go to give someone else joy,” said Ugochukwu.

That’s exactly what he did for friend and MSUM student Leticia Esteves. She is a junior majoring in accounting with a minor in Spanish. Esteves is from Brazil and met Franklin her freshman year at the nearby McDonald’s restaurant. They’ve been friends ever since.

Esteves always wanted to buy a painting from him, but was waiting for the right one. Finally, when he posted on Instagram his painting of a butterfly, it caught Esteves’ attention straight away. She is obsessed with butterflies because she’s a swimmer and swims the butterfly, and she felt the painting was perfect for her. She messaged him the moment she saw it and was able to buy it from him. She treasures it to this day.

“I love going into my room and seeing the painting. It’s my favorite decoration in my room,” said Esteves. “I really liked it because it was colorful and happy.”

Not only does Esteves see Ugochukwu’s paintings as colorful, but she also sees his personality in them.

“He is one of the most positive people I’ve met,” said Esteves. “He’s always laughing and smiling. Even when there’s something hard going on, he always tries to see the good side of everything.”

Whether he’s painting, selling his artwork, or just walking from class to class on campus, anyone is bound to find Ugochukwu with open arms and a smile.

“I’m very approachable,” he said. “Ignore the beard. Just come up to me. ‘Frank, I like that. Is it for sale?’” said Ugochukwu.

J-Mill Answers the Burning Question: Where do we find the Best Chicken Strip Basket?