J-Mill Answers the Burning Question: Where do we find the Best Chicken Strip Basket?

Deep fried, crispy and juicy chicken strips are a staple at restaurants across the nation. Whether you’re a picky 7-year-old or a fully grown man-child, chicken strips evoke a primal response within us.

When it comes to finding the best chicken strip basket around, you can count on one man to guide you in the right direction—John Miller.

Since Feb. 21, 2018, Miller has been on a quest to systematically hunt down and rate chicken strip baskets throughout the Upper Midwest. 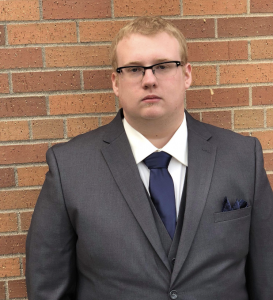 Miller is the creator of his own blog, “Thrills with JMills.” He writes a little about some of his interests, including sports, but the main content is a series called “Basket Reviews.”

A “Basket Review” consists of Miller ordering, devouring and rating a basket of chicken strips and fries. His territory ranges from Fargo-Moorhead and West Fargo, all along I-94 on the drive to his hometown of Melrose, Minnesota, and any place his work or taste buds might take him. If it’s in the Upper Midwest and it serves chicken strips, Miller is going to review it sooner or later.

He judges the baskets on standards like quality of the chicken, type of breading, thickness of breading, fries, dipping sauces and any extras. After all is taken into account, he assigns a score between zero and 10.

With just over a year of ratings under his belt, Miller has published 47 “Basket Reviews.” At four chicken strips per basket, that makes roughly 188 chicken strips, if you’re counting.

So why chicken strips? 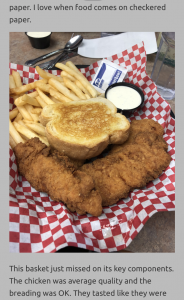 Miller, who graduated less than a year ago from MSUM’s communication studies program, is the kind of guy who only makes friends, never enemies. He was the sports editor of MSUM’s The Advocate for two years, and he can intelligently talk sports with anyone. He minored in sports communication.

“Having classes with J-Mill was the best,” said Patrick Herbert, an MSUM broadcast journalism graduate who works at Castle Danger Brewing Co., in Two Harbors, Minnesota. “He’s just a good dude. Everyone loves him.”

Miller’s clear and technical writing skills stood out, and he became a quiet mentor to his communication and journalism peers.

When he isn’t writing about chicken strip baskets, Miller is a public information reporter at The Forum. In his work at The Forum, he has written a story about a fashion trend known as “streetwear.” His other standout stories include college wrestling coverage, Fargo-Moorhead high school basketball, a Minnesota Twins caravan to Fargo, a local pinball player competing for a national championship and siblings who play in opposing marching bands at North Dakota State University and South Dakota.

Miller isn’t a big talker, especially when the topic is himself.

“What I will say, though, is I wouldn’t be doing what I am without the people I met at MSUM. I started as a part-timer at The Forum through a friend I met through class my junior year, and got into The Advocate via class as well.”