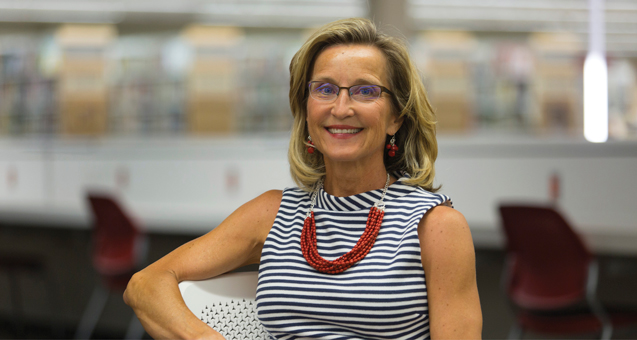 After 20 years of service in the United States and beyond, an MSUM alumna returned to the university as one of five former Dragons to be honored with the Distinguished Alumni Award during homecoming week.

Billi Jo Zielinski worked as an English teacher, a small business developer, a liaison between a congressman and his constituents and, most recently, the CEO and president of the North Dakota Make-A-Wish Foundation.

Zielinski began as a political science major at MSUM in the 90s, where she met her husband, Marc Zielinski. After graduation, the two married and joined the Peace Corps. Stationed in the former Soviet republic of Turkmenistan, she worked as an English teacher and helped develop small businesses.

One of her former professors, Dr. Andrew Conteh, said that even as a student, Zielinski seemed like someone who would go into public service as a lifetime calling, describing her as “dedicated, articulate and focused.”

Conteh applauded her for joining the Peace Corps at a time when he says few people were doing so and for going to a country where she also had to learn Russian.

After a year in Turkmenistan and having just celebrated their five-year wedding anniversary, the Zielinskis were forced to return to the United States. It was just after the Sept. 11 attacks, and the regional director for Turkmenistan, Kurdistan and Uzbekistan ordered the evacuation of Peace Corps members from the area because of their proximity to Afghanistan. Zielinski said they were disappointed to leave Turkmenistan behind after only serving one year of their two-year assignment.

“It was hard to not be doing what we anticipated doing with the Peace Corps,” Zielinski said.

From there, she began working for Congressman Jim Ramstad.

“To be able to expand my textbook knowledge and work in the halls of Congress with public servants was something that I never lost reverence for,” Zielinski said of her time in Washington.

She worked as a network administrator and in constituent services, relaying any correspondence for the Congressman, his intern program and his website.

While in Washington, the Zielinskis had their two children, Arek and Ruby. Zielinski said her decision to work in public service comes from family.

Her grandmother also had an impact on her.

“She put me on a bus to a teenage political camp and told me to learn about current events and politicsz, and I just loved it,” Zielinski said.

Eventually, she was recruited by Gov. Tim Pawlenty’s administration and moved back to the Twin Cities. The family stayed in the Twin Cities for a few years before Marc’s father passed away.  Then, they moved to Moorhead to be closer to Marc’s mother.

“We wanted her to know her grandkids and to be here with her and for her,” she said.

Gina Monson, Director of Alumni Relations, reviewed more than 100 nominations for the award.

“Billi Jo is just an excellent candidate,” Monson said.  “She’s had a long career in nonprofits, legislation, and she comes back to speak with our students often, and she’s just been passionate, lifelong, about what she does.”

Zielinski received the Distinguished Alumni Award Oct. 15. The day was even more special because it was her second-year anniversary with the Make-A-Wish Foundation in North Dakota.