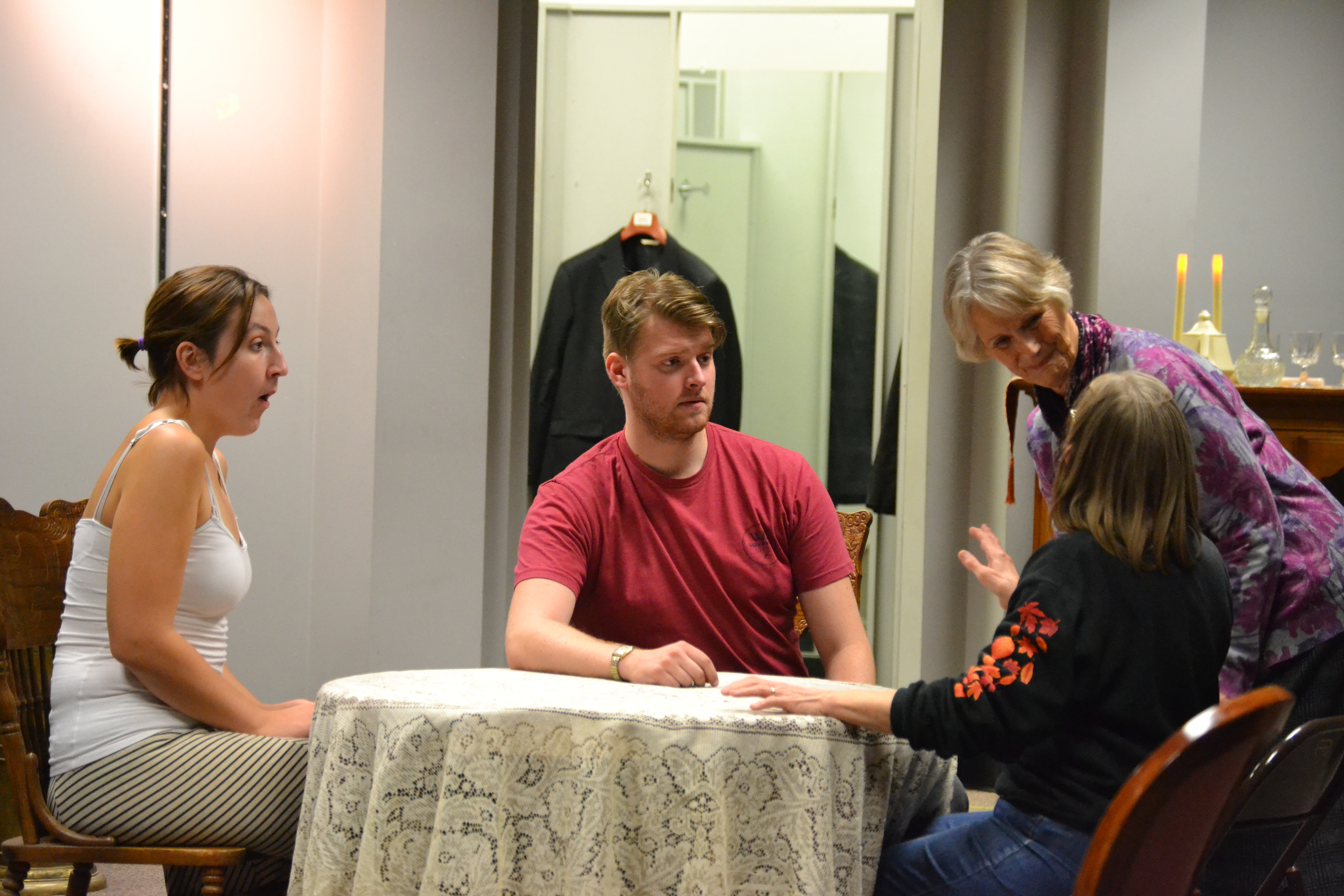 A play that provides a mixture of romance and comedy, then poisoned with murder sounds like the perfect start to the chilling Halloween season.

The classic dark comedy “Arsenic & Old Lace” is back in Fargo-Moorhead as Tin Roof Theatre Company opening production to their 11th season.

“We need the support of patrons and what better way to bring them in than with a good director, good cast and a classic comedy,” said Karla Pederson, founding member of Tin Roof.

Pederson hopes that a classic comedy will bring in a crowd.

“We try to have a balance between comedies and dramas,” Pederson said. “It was time to have a comedy after a heavy season last year.”

Tin Roof has performed “Arsenic & Old Lace” before at the end of their second season, Pederson said.

Pederson, Pat Chinquist and Scott Awalt are all three playing their original roles as they did eight years ago — Pederson and Chinquist as the Spinster sisters and Awalt as Dr. Einstein.

“Everybody has participated in the play at one time or know someone who has performed in ‘Arsenic & Old Lace,’” Director Martin Jonason said. “Your aunts, your uncles, you performed it in high school, saw it at a community theatre. Even professional theatres do it. So it has a draw from all over.”

Ever since the comedy first came to the stage and big screen during World War II, it has been entertaining audiences with its timeless humor, clever plot and colorful characters.

Theatre junior Nate Pace, who plays a lead role as Mortimer, claims to have watched the movie over 100 times. When he was informed about auditions in September, he couldn’t turn down the opportunity.

“I was ecstatic because it is one of the few major big roles I have done,” he said. “As an actor, especially while in college, it’s a great opportunity to expand your wings and learn from community theatre experiences.”

Since he was a child, watching Jim Carey movies and mirroring his facial expressions, Pace has had an interest in acting.

“I couldn’t sleep that night after because I was so excited,” he said. “Although, honestly, I was also a little scared that the phantom was going to get me.”

Since he grew up in a town that didn’t provide theatre programs, Pace was overwhelmed by the opportunities MSUM and the F-M community provides for theatre students.

“It has given me a lot of experience and new things to consider when acting and taking on a new character,” he said.

Fellow theatre junior Molly Berg plays Mortimer’s fiancée and preacher’s daughter, Elaine Harper. She has done productions in the community before and enjoys the opportunites it provides.

“People have always told me to get involved,” she said. “I have had many colleagues and professors tell me to branch out and get as much experience as I can in the community.”

Berg has performed in Tin Roof productions before, playing a guard and doing voiceover in “Judgment at Nuremberg” last season.

“Tin Roof Theatre helped me work through my ‘quirks’ and helped me open up and get out of my comfort zone,” she said. “[Director Martin Jonason] coached me to be energetic and really connect with my character, which helps me connect with my audience.”

When selecting a guest director, Tin Roof chose Jonason due to his extensive experience in the Fargo area and around the United States.

Jonason directed a production of “Arsenic & Old Lace” 39 years ago as the opening play at FMCT.

“What is unique about this play is that I actually have actors of the right age,” Jonason said. “It’s so seasoned that it’s hard to do it differently. It has a classicism all on its own.”

Since 1964, Jonason has played the part of Teddy Roosevelt in the original outdoor drama “Old Four Eyes” at the Burning Hills Amphitheatre and has been a guest performer to corporations and public affairs organizations for years.

These years of experience have helped Jonason coach an actor in “Arsenic & Old Lace” who plays a character who thinks he’s Teddy Roosevelt.

“We have the seasoned portrayer of Teddy Roosevelt directing a man who has never played Teddy but is doing a heck of a job,” Pederson said.

Actors are excited for opening day to offer the audience a wide array of characters, from murderous old women to someone stuggling with split personality.

“It’s like you put a normal person into what you think is a normal world but then that world flips upside down and turns all around,” Pace said.

The true sidewalk warriors of Fargo