The Prince of Compton 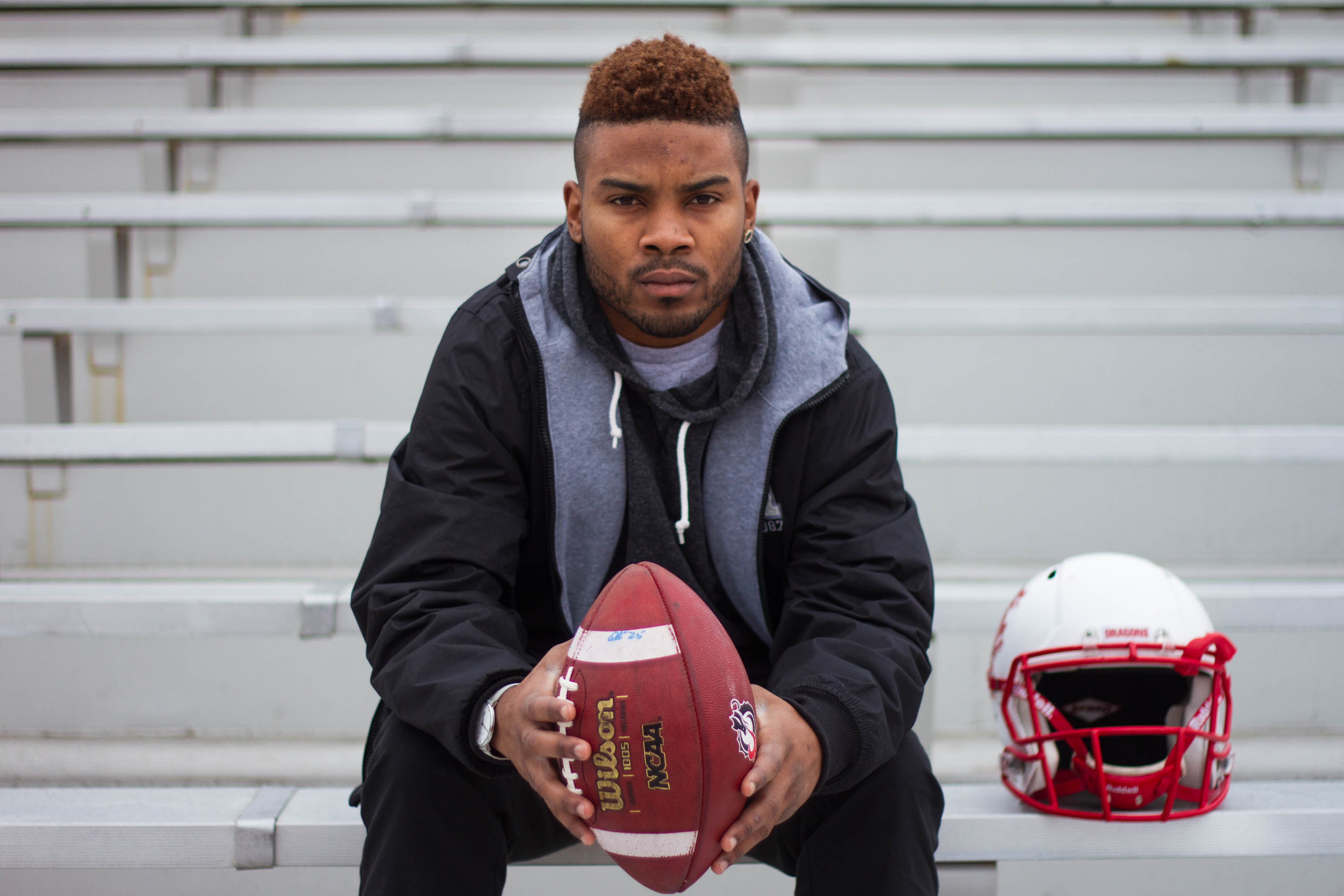 “When I come home for a vacation or Christmas or something, I’m f–king scared now these days … This culture actually damn near made me too comfortable not locking my doors when I get back home. My house has bars on (it) back in Compton … Here, I don’t have a single bar. I leave my house door open — damn near don’t even have a key.”

For senior wide receiver Preston Prince, this chaos was a way of life, and football was his ticket to a better future.

Prince grew up with strong morals around him in a middle-class household. His parents worked stable jobs. Prince went to and played football on scholarship at an all-boys private school in Watts, California, that “everyone looked up to,” Verbum Dei High.

“(We were a) normal American family,” Prince said. “I really took it for granted. My parents raised me in a church house. I knew right from wrong, but most of the time, being a young kid, you do things you want to do, and I did some bad shit. For the (most part), I knew when to be like, ‘Nah, that’s a little bit too much.’”

Growing up in Compton, California, Prince was raised in an area occupied by infamous gangs like the Crips and Bloods, more specifically, the Bounty Hunter Bloods and the Grape Street Watts Crips. Prince never joined a gang himself, but he encountered them often enough, through friendships, sports and even just his daily life.

Prince vividly remembers situations that shaped who he is today, and holds on to memories that turned him into a man long before he turned 18.

One afternoon, before football practice started, members of the Bounty Hunter Bloods entered a back locker room at Verbum Dei. They were looking to start trouble with Prince’s cousin, who was also a teammate.

“At the time, I think there were around eight of them,” Prince said.

Prince got involved to help his cousin.

“Because if I didn’t, I’d probably get beat up by my relatives,” Prince said jokingly.

“(We) still had to practice. It made us a man. Being around that kind of makes you into a different person — still being able to go through some adversity and calm yourself down, then still do whatever you’ve got to do for the rest of the day.”

But some “adversities” are scarier than others.

Prince recalls when a friend of a different cousin rented out a biker bar to throw a party. When they showed up, a guy tried starting trouble with his cousin. The problem resolved when the DJ calmed the two men down, but soon enough, the same man was bothering another person at the party. This time it escalated.

“At the time, everything was going in slow motion,” Prince said. “I’m scared as shit … He just starts shooting this guy, and everybody’s just leaving, and I’m still on the speaker just in shock, my mouth open.”

Even the DJ left.

Prince said he can still remember the shooter’s face. He ran out of the bar to see girls hopping over a nearby barbed wire fence to get away from the scene.

“That’s why I always remember this, because I had to jump over the fence, too, and it actually put holes in my hands for a couple weeks,” Prince said.

That was his freshman year of high school.

Prince continued to play football, and he used it to separate himself from the harsh realities around him. But sometimes the distinction wasn’t enough.

During Prince’s sophomore year of football, his team was set to play against Compton High in a non-conference game. Compton was a public school, and many of its team’s players were affiliated with area gangs, an association which contrasted many of Prince’s teammates’ experiences. Compton High’s players gave a stark warning to Verbum Dei before the game.

“They were scared,” Prince said. “The rest of the players weren’t playing like themselves.”

Prince said after that day, Verbum Dei “blew out” every team for the rest of the season.

Throughout the rest of his high school career, Prince found continued success in football. He started to realize his skills on the field could get him into a college away from his neighborhood.

“One day, I was with my dad, and (we were) in my truck, about to get out and go get our hair cut, and all you hear is gun shots, and we turned back because it was right behind us,” Prince said. “The guy was pulled up next to the car and just started shooting the car. We were so close to it, and I was like, ‘Damn, that could have been me.’”

Prince said that moment changed him for the better.

“That was like a big picture of, ‘Damn, I need to get out of here. I need to experience something else,’” Prince said.

After high school, Prince left Compton to play football for the private, four-year Sterling College in Sterling, Kansas. He received a full scholarship to play as a wide receiver.

For Prince, the move was a culture shock.

“The first time I had an encounter with a white person was Sterling College,” Prince said. “(I’d) never had like, a full-blown conversation. I never felt comfortable ‘til I got (to MSUM).”

Prince redshirted his first year at Sterling, and after his second, he said, it was time to move on. After the 2011 season, he received a call from MSUM. Coaches had seen game highlights of Prince online. Although they couldn’t offer him a scholarship upfront, Prince knew he could earn one himself.

“I was like, ‘You know what? I’m going to give these guys a shot,’” he said. “Next thing you know, I did spring ball, and I was on scholarship.”

Days before his first semester at MSUM, before he left California for the summer, Prince and his brother Stanley Prince Jr., who played football for Fresno State, and one of Stanley’s fraternity brothers were out to get something to eat when they had an unexpected run-in with law enforcement.

“We were in Inglewood, at a Jack in the Box in the parking lot, and my brother has his stereo loud. Next thing, all we see is cop cars swarming around us — six cars. (They) had their lights shining on us really quick, coming in really fast,” Prince said. “(We’re) talking about, ‘Put your hands where I can see them.’ This time, I was in the back seat. Both my brother and his frat brother got told to get out the car, and I’m in the back seat, yelling out, ‘I’m in here, don’t shoot.’ Their lights were so bright. I didn’t know if they saw me in the car.”

Prince said someone had filed a complaint, saying the car he was in was associated with an area gang. Prince said the person who called in had lied and said they saw someone put a gun in the car.

“They said that so they could search the car without a warrant,” he said. “They put us in handcuffs — had me on my knees. Said some crazy shit like, ‘You know what we’re doing this for? You guys look like gangsters.’”

The cops went on to search the car, Prince said, finding nothing.

“(It was) bullshit,” Prince said. “(But) what are we going to do, waste our time complaining about that? That shit happens every day.”

Prince has spent his last three years at MSUM. He’s battled injuries throughout the years, but still accumulated five touchdowns since 2012.

He scored a rushing touchdown against University of Mary in the Dragons’ blowout game Nov. 7, where Prince took a handoff 64 yards, virtually untouched to the end zone. His parents Alice and Stanley cheered in the stands. It was the last time they’ll see their son play for the Dragons.

“Saturday was an answer to prayer — no rain and bright sunny day — and the touchdown was the icing on the cake,” Stanley said. “After the game, he came and said, ‘That was for you Dad.’ Enough to make a grown man cry.”

Preston Prince will be graduating at the end of this semester with a bachelor’s degree in advertising and PR. He plans to return home to Compton.

“I think I set a high bar, for when I go back, for what my friends would like to be,” Preston said.

His father says Preston will have no problem finding purpose.

“I know he will have something to say,” Stanley said.