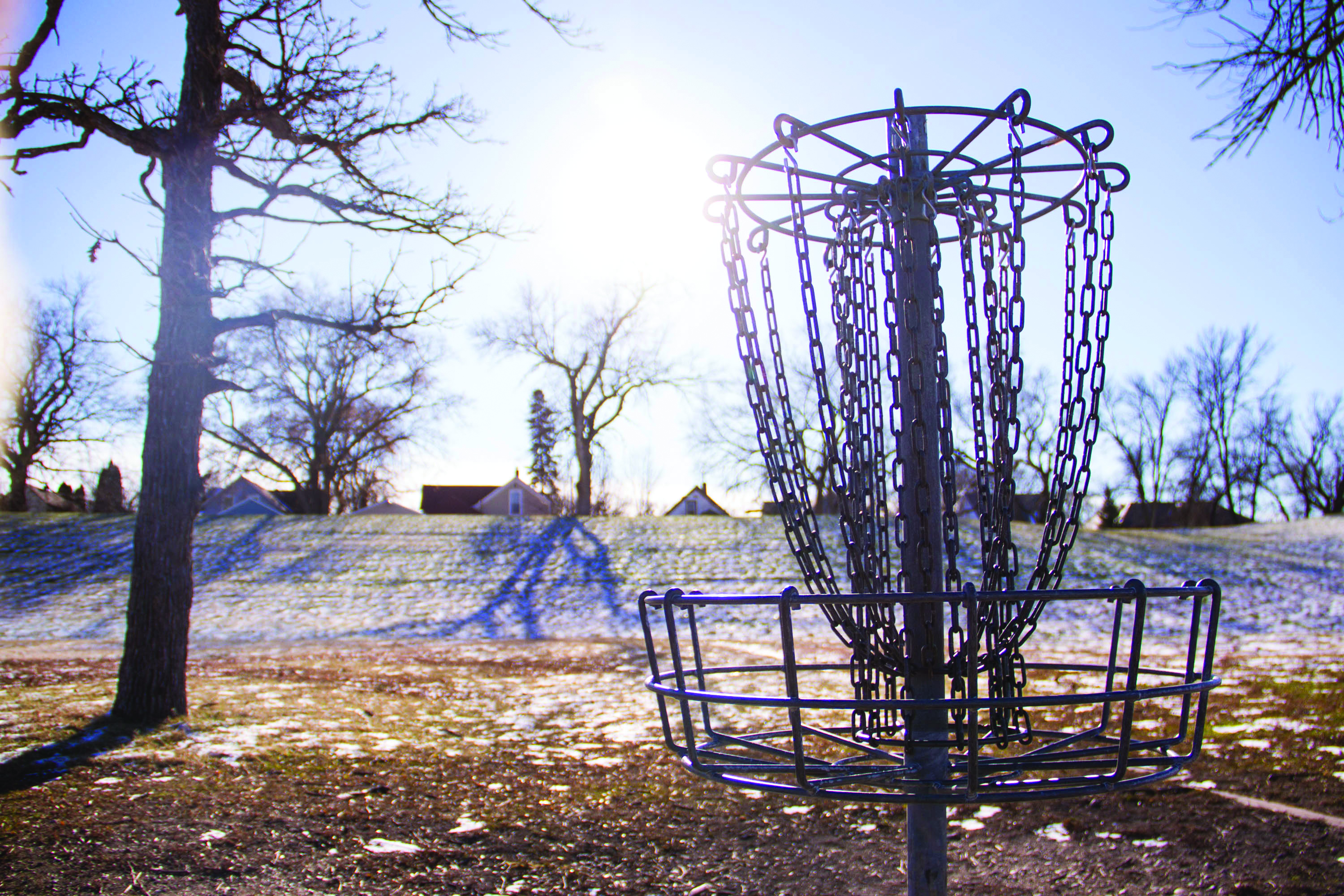 Discs whiz through the air, sometimes accompanied by the four-letter words that follow a bad shot. The quiet, relaxed atmosphere of the Woodlawn Park disc golf course makes it the perfect place to enjoy one of the beautiful late-fall days we enjoy before heading into hibernation.

Disc golf, frolf or Frisbee golf may be a relatively new sport to some, but it’s been a staple of recreation for some MSUM students.

Josh Schmitz, a senior elementary education major, has been playing disc golf for about seven years and comes from an area that embraces this alternative to one of the oldest sports in the world.

“I’m from Blaine, Minnesota, and there are a ton of courses — including Blue Ribbon Pines, a professional 27-hole course,” Schmitz said. “That’s where me and my friends go if we’re looking for a challenge, and we usually make a day out of it.”

Senior exercise science major, Caleb Radley, an Arizona native, wasn’t exposed to the sport until he moved to the Midwest.

“I am from Thatcher, Arizona, and there are no courses in my town,” Radley said. “There are many more courses in the Midwest, I have noticed.”

Although he has only played for a year, Radley is hooked. He said he will be playing for years to come because it’s a “chill” sport and he enjoys it “as long as it’s not too cold.”

Radley and Schmitz are looking to take their hobby to the next level and enter competition with other universities in Minnesota.

“This summer, I found out if you qualify for nationals, then you get to play at nationals,” Radley said. “I was contacted by the University of Minnesota to get a team together for the regional qualifier.”

The regional qualifier takes place in St. Paul, Minnesota, Mar. 5-6, and the team can compete in either singles or doubles events. Each team is comprised of four individuals and two alternates.

The doubles team plays a form of best ball, similar to a group golf competition, where two sets of two throwers for each team alternate throwing the tee-off shots. From there, the team decides which spot of the initial two shots they would like to throw from. Then, the next two throwers (who did not tee-off) take their shot at the basket. That continues on throughout the course.

Singles competition takes the lowest three scores from the team to count toward the team score. Each hole only has two members from each team competing to prevent rules violations.

Disc golf is similar to golf in its scoring, as each throw counts as one shot. Most courses are played with a par of three shots per hole, with the exception of professional and tournament courses, where longer distance to the basket can increase the par number of shots.

The basket is a metal pole supporting two sets of metal framing. The top is flat, and the bottom has a raised edge to catch the disc. Chains hang from the top frame to catch the disc and provide a target for players to hit.

There are several courses in the F-M area. In North Fargo, Oak Grove park and Trollwood both have 18-hole options, and Woodlawn Park in Moorhead also has an 18-hole course. The most challenging, by far, is the 27-hole behemoth, Iwen Park, on 52nd Avenue between Moorhead and Fargo.

Schmitz and Radley plan to continue in the sport for years to come because it’s accessible to anyone and the cost of a disc (usually around $15-$20) is basically the only money required to play.

The minimal investment makes it a perfect sport for high school and college-aged participants, for whom money may be a concern. Disc golf provides a cheap alternative to regular golf, while allowing participants to engage in some low-impact exercise outdoors.

Schmitz and Radley are still in the process of organizing their team for competition in March and are using connections with the MSUM fraternity Kappa Sigma and their friends to spread word of the team.

There is no try-out system or process to select a team yet, but readers can find information about the national collegiate tournament on their website at ncdgc.discgolf.

The Prince of Compton