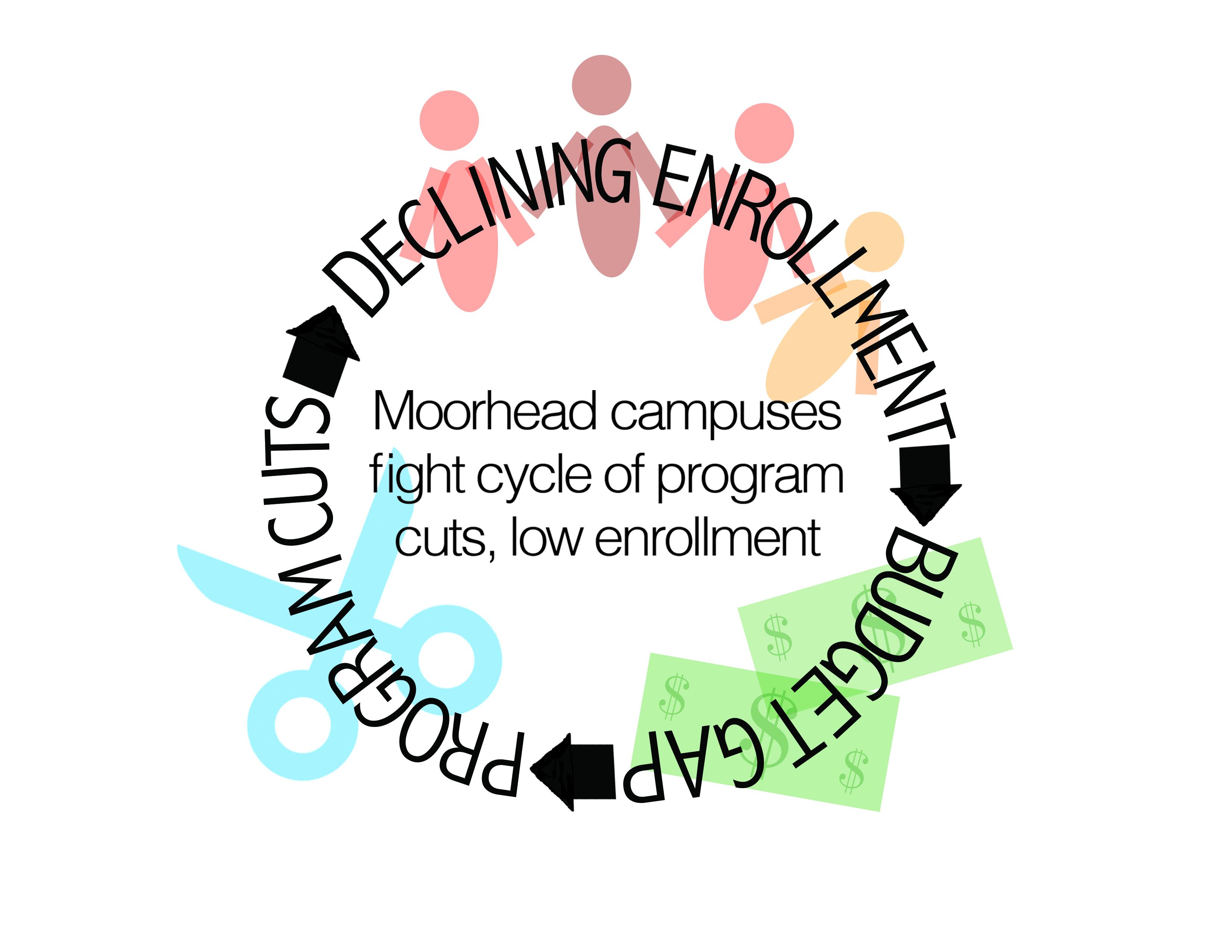 Students and faculty at Concordia are watching financial stresses erode their language and humanities departments — two of the private liberal arts college’s key assets. A few blocks east, similar pressures are taking a toll on MSUM, with further program cuts likely as the institution faces a nearly $8 million budget gap.

“Without classics, German, French and Norwegian, Concordia will no longer offer humanities programs that distinguish it from any other college,” said Heather Waddell Gruber, chair of the college’s classical studies department. “These cuts are squandering the goodwill Concordia used to enjoy with the community.”

Some instructors were laid off. Others took incentives for early retirement. The 38 students whose majors were cut were angry and worried as they learned their chosen courses would be discontinued.

“Students … feel like the degrees they are striving to finish have been cheapened,” Gruber said, adding she can see particular program cuts contributing further to declining enrollment.

Concordia is in a cycle other Minnesota institutions can relate to: declining enrollment causes a budget gap, leading to program cuts which cause further enrollment declines. MSUM specifically is partner in this spiral.

MSUM, alongside 18 of 31 other MnSCU institutions, failed this year’s financial stress test — an analysis of how well the institutions could handle difficult budget situations. About the same time, the MnSCU Board of Trustees approved a $2,750 raise for Chancellor Steven Rosenstone, citing a favorable performance review and setting his salary at $390,000 — the maximum amount permitted for a chancellor. His housing, transportation and other allowances worth $77,160 per year are not included in that number.

“(Faculty members) are not happy to hear that he got a raise, given the problems MnSCU has been facing,”  MSUM Faculty Association President Magdalene Chalikia said. “But that is an issue to be taken up with the Board of Trustees.”

She added faculty are more concerned about potential program and faculty cuts due to next year’s projected budget gap and the unsolved permanent budget cuts needed in 2018.

“There are some (faculty members) that aren’t sure yet if they are going to lose their jobs or not,” Chalikia said.

How we got here

“Once you are already into the fiscal year, you can make some adjustments, but to make that large of an amount of adjustments would have been difficult,” said Jean Hollaar, MSUM Associate Vice President of Finance and Administration.

With $2.6 million reserved from last year’s budget, MSUM was able to cover most of this year’s gap. Still, financial difficulties linger as the development of 2016-17’s budget continues.

The administration is expecting an additional 10 percent enrollment decline next fiscal year, with a projected $7.8 million budget gap.

“We are having our last large freshman classes moving on to graduation, and we are not replacing it with a similar amount of incoming freshman,” Hollar said.

Another problem is MSUM’s local competing colleges and universities. The past few years, Minnesota institutions have been competing with North Dakota institutions for incoming high school students, Fauchald said. Eleven colleges and universities throughout the North Dakota University System (including North Dakota State University) have shown growth or steady enrollment numbers in fall 2015, according to NDUS’s website — with Valley City State University at a record high enrollment.

Hollar said she believes MSUM lacked a strong recruitment strategy in competing with other institutions. The constant vacancy of positions within MSUM’s admissions office since 2014 left the department unstable and lacking in leadership, she said.

“For me, even if you had the best strategy in the world, you still need people to implement that strategy,” Hollar said. “What amount of the (enrollment decline) is attributed to the demographic change and what amount could be attributed to strategy change? We just don’t know.”

MSUM and other MnSCU institutions have limited options for raising revenue when enrollment decreases at such a rapid rate. Sixty percent comes from tuition and 40 percent from state appropriation, but the state legislature prohibited tuition increases during this biennium.

“If they had allowed us to increase tuition in fall semester 2016, we could have covered our budget gap with the tuition increase,” Hollar said. “It’s not going to take care of the entire thing … because even if you increased tuition and have an enrollment decline, it still won’t cover it entirely.”

But Fauchald said increasing tuition would just cause further enrollment declines and draw students away from four-year institutions.

To address the budget problem, MSUM has created a temporary fix to tide funds over until administration establishes a permanent solution in the next few months, though it has only planned for $5.4 million of the shortfall — $1.3 million in permanent reductions and $4.1 million in one-time reductions.

The permanent reductions include leaving positions no longer needing to be filled vacant and a reduction in President Anne Blackhurst’s community events budget.

The remaining $2.3 million of the $7.8 million budget gap is yet to be identified and solved.

“We don’t yet have a plan for the $2.3 million, but that is what the academic affairs and athletics is still working on and identifying their spending reductions,” Hollar said.

For the long run

For fiscal year 2017-18, MSUM’s administration will be seeking permanent solutions to align academic affairs with the institution’s size.

“Whether it is entire departments, adjuncts, or fixed-term faculty members that are reduced, we need to align our faculty, and our operations, too, to having fewer students in some departments,” Hollar said. “The vast majority of spending is in academic affairs. If we have programs and majors that are not in high demand, then we need to be making adjustments.”

Senior Vice President of Academic Affairs and campus Charting the Future Committee Chair Joseph Bessie said at a Student Senate meeting that philosophy, for example, is a potential cut due to low enrollment in the program. He begged the question: If philosophy was no longer a major, would MSUM lose enough incoming students to impact enrollment?

“It doesn’t mean that is no longer in the curriculum or we don’t have philosophy courses,” Bessie said. “It means that going into the future, we are not going to continue to invest into it. Students aren’t coming to MSUM for philosophy, so we wouldn’t see that as affecting enrollment. Over time, we may not have it (at MSUM). Nothing is going to happen instantly. Students that are currently enrolled in those programs would be able to finish their degree.”

Blackhurst said there haven’t been any decisions about eliminating programs, and there are no plans to eliminate programs in the next 18 months. But every year, MSUM makes decisions about adjunct faculty based on projected enrollment and budget.

“Next year, we will hire substantially fewer adjunct faculty, due in large part to our lower enrollment,” Blackhurst said.

Down to the wire