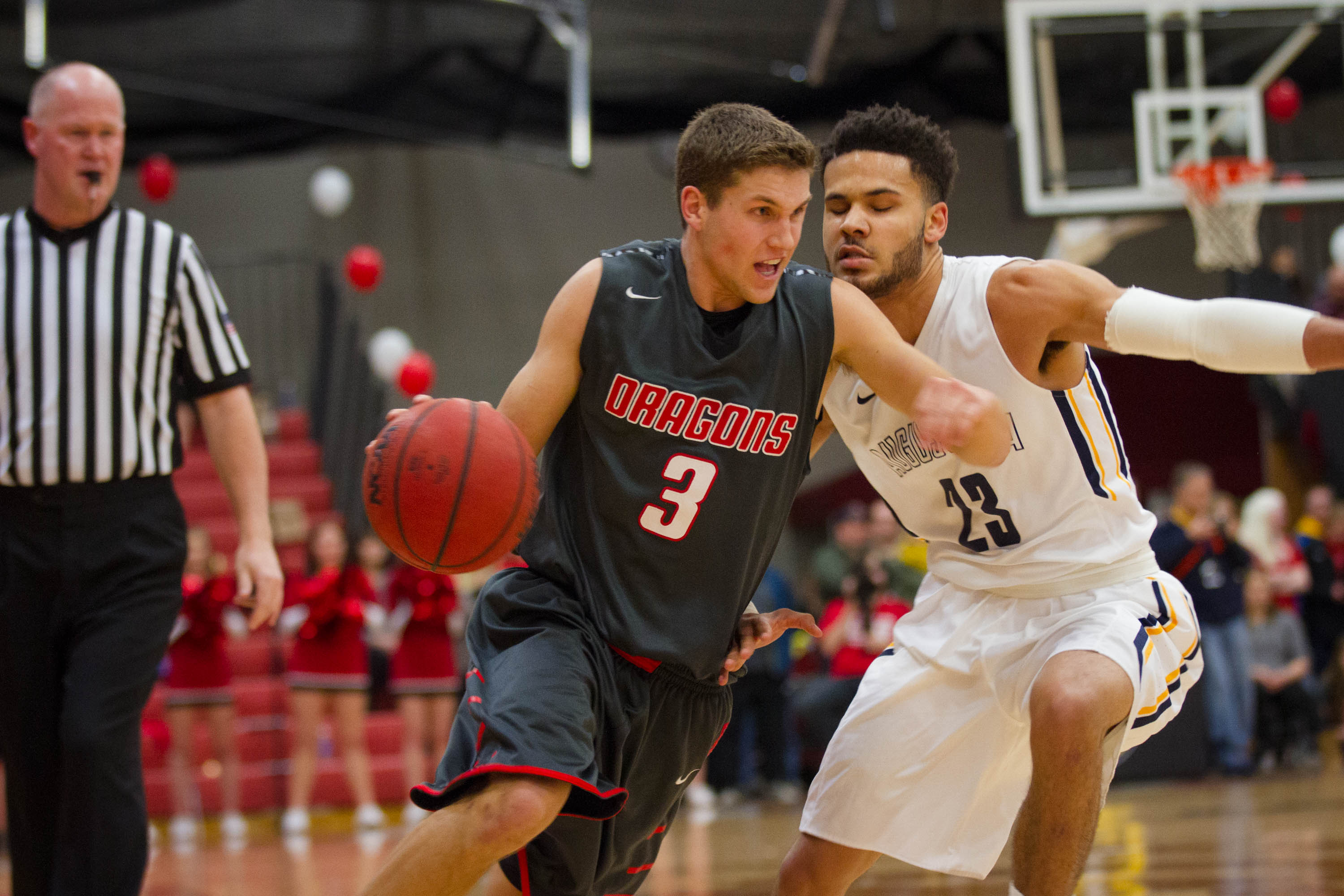 More than 2,220 rowdy fans filled Nemzek to see the Dragons women and men play Augustana Saturday. Fans were overwhelmingly energetic, contributing to the playoff-game-like atmosphere all night. Despite the Dragon women losing 74-69 and the men losing 94-86, Dragons head coach Chad Walthall said everyone in attendance made their presence felt, even with the losses.

“I remember our first year here,” he said. “There were 200 people, and that was a great night. To see that, even though we are on the losing end, you just look around and just appreciate the moment the best you can as a coach. I think the fans enjoyed it.”

A dominant performance in the paint propelled the Augustana Vikings to victory over the Dragons women, 74-69.

With the win, Augustana improves to 12-6 in the Northern Sun Intercollegiate Conference, and 18-6 overall. MSUM falls to 16-5 overall, and 13-5 in the NSIC. Northern State lost Saturday as well, which bodes well for MSUM since the two teams are still tied for first in the north division.

Augustana got out to an early lead in the first half and never looked back, despite being convincingly out-shot and out-assisted by MSUM. The Dragons managed to shoot 46 percent overall from the field compared to Augustana’s 39 percent. MSUM hit more three pointers, shooting 10 for 23 opposed to Augustana’s 7 for 26. The Dragons grabbed nine more assists than Augustana, winning that battle 19-10.

The battle in the paint was the game’s deciding factor. The Vikings were able to out-rebound the Dragons 43 to 31, including 15 offensive boards, opposed to the Dragons’ four. The offensive rebounds allowed Augustana to score 18 second-chance points to MSUM’s seven.

“We had two critical turnovers in the last two minutes of the game,” Dragons head coach Karla Nelson said.

Both turnovers contributed to the Vikings’ victory. But coming up just short shouldn’t discourage the Dragons. The team is still in a position to win the north division.

“You have to give Augie credit because they came in and made plays,” Nelson said, “but you also have to give us a lot of credit for hanging on and making it an exciting game for all the fans.”

The game was indeed exciting, with a great effort given by both teams.

From here, the Dragons travel to Duluth to take on 6-15 University of Minnesota-Duluth. The women have a road game the following day when they take on St. Cloud State. 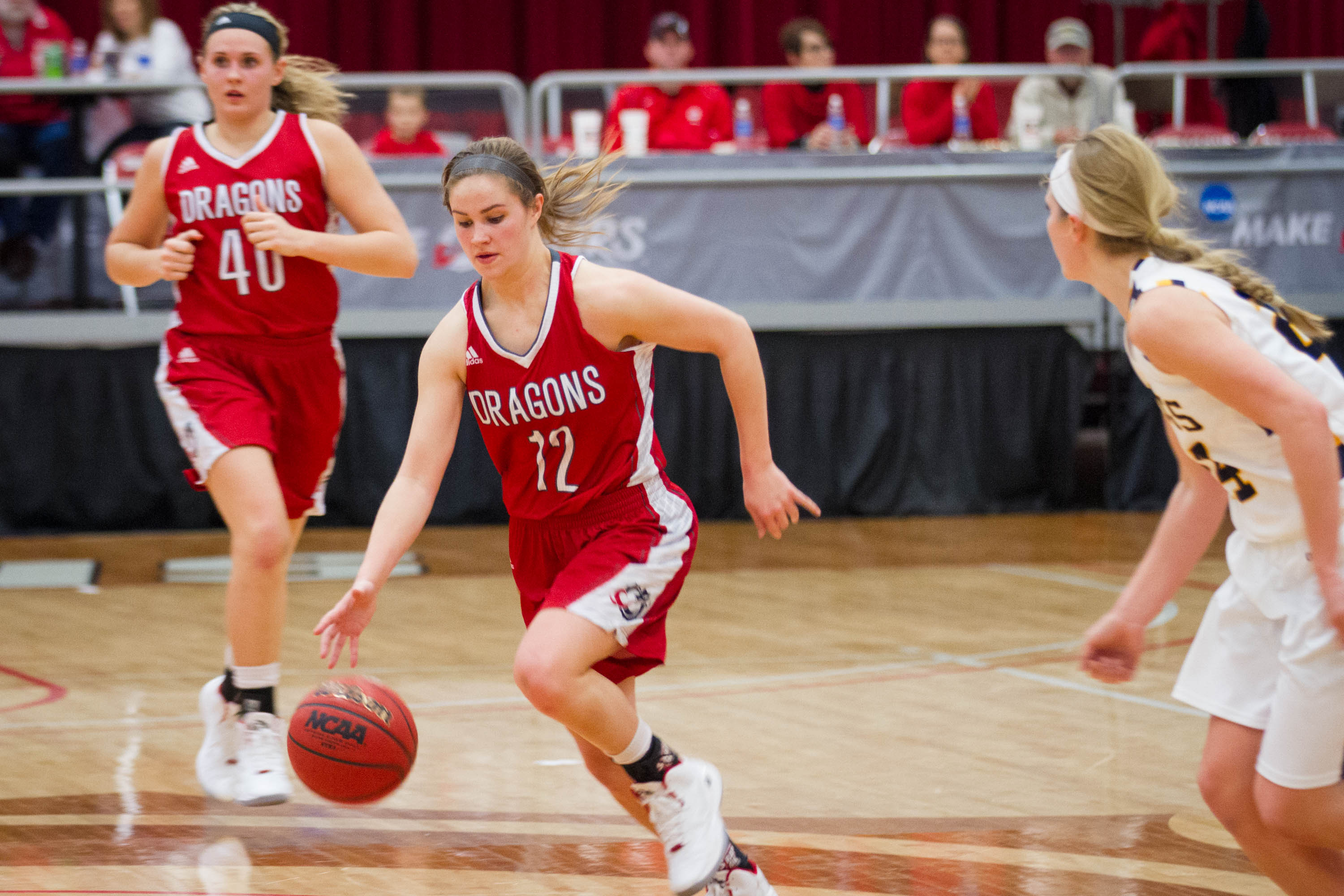 For men, Vikings three point shooters too hot to handle

The Augustana Vikings came into Moorhead to face the Dragons after suffering just their second loss of the season the previous night to Northern State. Previously, the Vikings were riding a 19-game winning streak tied for the longest in school history, set last season. The No. 8 ranked Dragons vs. No. 1 ranked Vikings marks the highest ranked game in MSUM history.

A physical game from the tip-off, Moorhead came out strong, but lost the lead with 18:10 left in the first. With 13 minutes left, Augustana pulled ahead by five, a lead which fluctuated throughout the first half. It was a back-and-forth game, but the Dragons weren’t able to reclaim the lead.

The Vikings are usually led by senior forwards Daniel Jansen and Casey Schilling, but it was Jordan Spencer who started out hot. Spencer, averaging 7.8 points per game coming into Friday, shot four of five from beyond the arc in the first half. He continued to shoot the ball well into the second half, giving the Vikings another offensive weapon.

Schilling, who recorded his 30 career double-double, said after the game that it was a huge boost for the Vikings to have Spencer playing confidently. Spreading the ball around as much as possible helped give the Vikings the edge they needed.

“Having a balanced attack is huge,” Schilling said. “(Spencer) had a slow start to the season, but we know how good of a three point shooter he is.”

Drawing new attention from the Moorhead defense, Jansen and Schilling helped carry the load offensively the rest of the way. Jansen scored 16 of his 25 points while Schilling put up 13 of his 26 points in the second half. Dragons senior guard Tyler Vaughn hit a three with 2:14 left in the game, narrowing the Vikings’ lead to six. It was as close as the Dragons would get, and the team was unable to mount a comeback.

“We tried a mixture of things,” Dragons head coach Chad Walthall said. “(Augustana) is just so good at countering what you’re trying to do.”

From the start, Sevlie and Jansen battled in the paint all night. The two big men limited each other out with physical play.

Senior center Isaac Sevlie, the NSIC leading scorer, led the Dragons with 22 points, extending his streak of 20 or more points per game to nine. Sophomore guard Tanner Kretchman added another 20 points to the Dragons effort, his second highest point total of the season.

“Those are probable two first team all-conference players,” Walthall said. “That’s what you expect (from them).”

Both teams are bound to face each other in the playoffs. Players agree they would like to see a rematch. Walthall said they can learn from the game. Even with the Viking’s avengeful intensity, Walthall believes the Dragons can “stick with them.”

“You knew after last night it was going to be a great effort on their end,” he said. “I was proud of our guys. Hopefully we get to meet them again.”

Next weekend, the Dragons travel to Duluth to face UMD on Friday and square off against St. Cloud State on Saturday.