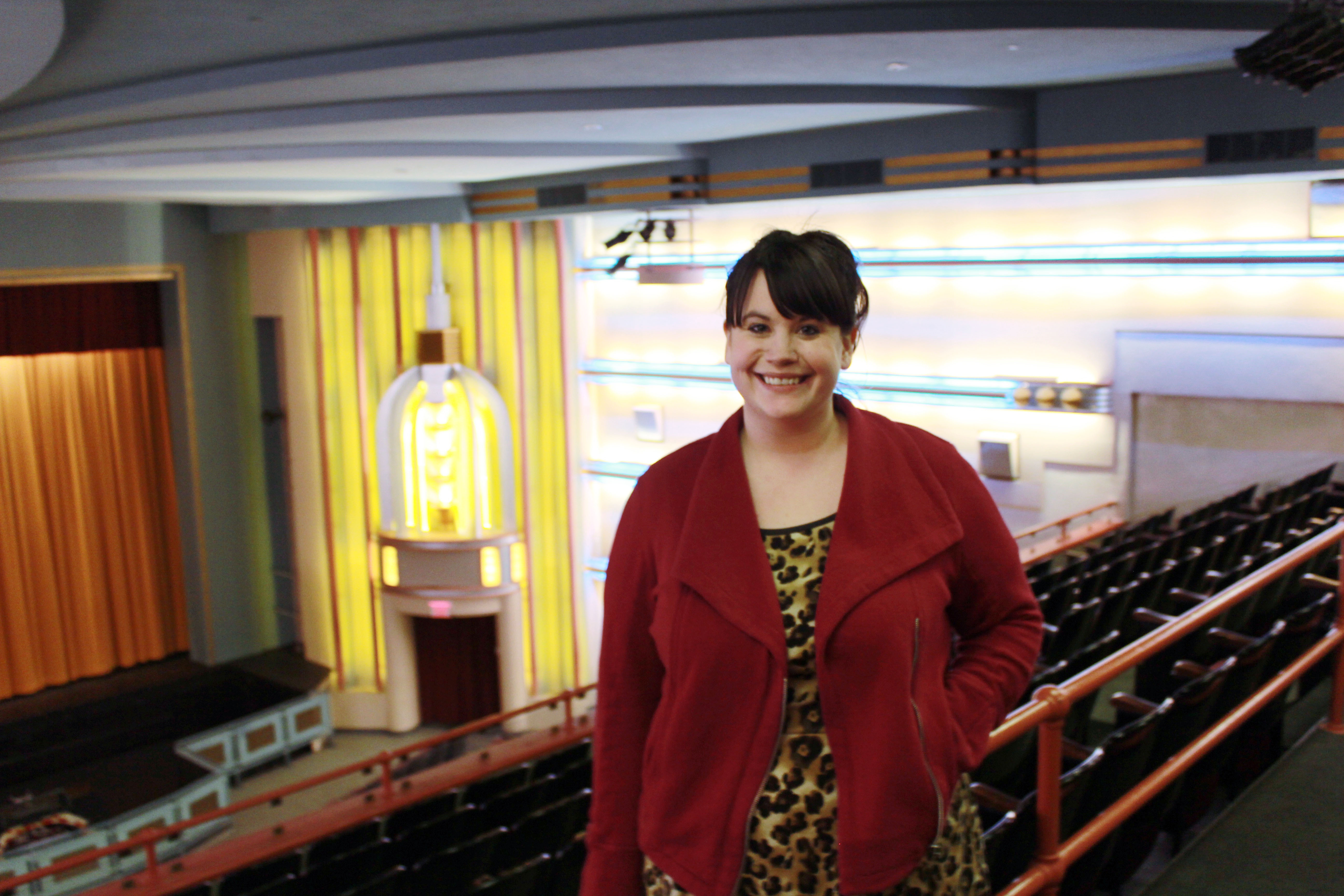 Alumna Emily Beck vividly remembers driving with her family to the movie theater to see “Jurassic Park” when she was 11.

Films like “Star Wars” that Beck saw at a young age with her family ignited her passion for film and eventually earned her a career in the industry.

Today, Beck is executive director of the Fargo Theatre and its Fargo Film Festival. Standing out as the city’s most iconic attraction, the theater at 314 Broadway offers local audiences a view of lesser–known films unavailable to them anywhere else.

‘Why I studied it’

Beck grew up in Fargo until she moved to Valley City with her parents and older sister, Molly, at the age of 6. More than a decade later, she moved back in 2001 to attend MSUM for film studies.

“I’ve loved film my whole life, and that’s why I studied it,” Beck said. “After seeing a great movie that would set my brain on fire, I’d want to talk about it with my friends.”

Her favorite films include Sofia Coppola’s “Lost in Translation” and Michel Gondry’s “Eternal Sunshine of the Spotless Mind.” Both hit theaters while she was in college and have been inspiration for Beck since.

Beck’s always enjoyed horror films and grew up loving “Star Wars,” but during college, she expanded her film horizons, watching black-and-white classics like those starring Charlie Chaplin in classes at MSUM.

Two of her film professors made a remarkable impact on Beck’s career path.

“Tom Brandau and Rusty Casselton changed my life,” she said.

Beck considers Brandau, who is still a film professor, a mentor.

Casselton, who began teaching at MSUM during Beck’s freshman year, developed the university’s film major and is known for his efforts in film restoration and preservation. In 2007, he passed away at age 53 as a result of surgical complications during cancer treatment. When he died, his wife let a few students who were close to him select little things from his office to remember him by. Beck chose his Mickey Mouse mug that held his pens and pencils. Today, that mug sits in her office at the Fargo Theatre, serving the same purpose.

“I think about him every day that I see it,” she said.

During her classes with the professor, Beck made silly short films with her guinea pigs. She never felt like she got the knack for filmmaking.

“Rusty always said, ‘Even if you don’t want to make movies as your career, you should make them, so you understand what it takes to do that,’” Beck said.

He was right — learning film production gave her a new appreciation for the art form. Casselton told her she could still turn her love of film into a career, saying the possibilities were endless.

“He was like, ‘You could run a film festival, work at a cinema or become a film critic,’” Beck said. “So he really kind of showed me how to channel that into a career path.”

She started working in the MSUM box office and learned how to work with audiences and ticketing. Meanwhile, she worked part time at Marcus Theaters. When she graduated in 2006, she continued to work there full time.

Two years later, she started at the Fargo Theatre, eventually becoming executive director after her predecessor retired. Beck knew she wanted to stay in Fargo, and the theater was a place she had always dreamed of working for. She was happy to accept the job.

“They didn’t tell me that (I was being trained in for executive director) for three whole years,” Beck said.

She’s thankful the film department at MSUM helped prepare her for her job.

“I can honestly say that what I learned there has helped me,” she said, “probably almost every day here, especially when it comes to film booking and understanding the industry.”

Beck has directed the Fargo Film Festival every year since she started working at the Fargo Theatre in 2008. The theater turned 90 years old March 15 and hosted its annual festival then, in celebration.

The event gives filmmakers nationwide the opportunity to submit and show their work. The theater provides the venue for most of the screenings, but the festival will takes place in other  venues throughout Fargo-Moorhead as well.

Concordia English and Spanish junior Micaela Gerhardt has caught Beck’s love of film, having started part time work at the theater in the fall and developing an interest in independent and foreign films accordingly.

“Emily’s passion for movies is really evident, and I appreciate all the work she puts into getting really good movies here,” Gerhardt said. “Emily likes to hear what (workers) think of the movies, and then we’ll compile a list of staff favorites.”

Beck could talk about films all day with her employees, family and friends. Movies often coinside with her favorite memories and her life’s defining events.

“I like that I get to work at a place that can (inspire) other people now,” she said.