It wasn’t ‘picture perfect’, but the Dragons demonstrated resiliency and plasticity in their Thursday night home opener; characteristics of a seasoned football team on the edge of something — something dangerous.

Mix the ability to exploit opponents’ miscues, another sign of the team’s progressing maturity, and you’ve whipped up a convincing 34-10 MSUM Dragons (1-0, 1-0 NSIC) victory over the University of Minnesota-Crookston Eagles (0-1, 0-1 NSIC).

Paced by a balanced attack, the Dragons gathered 434 yards of total offense while holding the Eagles to 204 and just 81 yards in the second half.

“Obviously, first game of the year, we’re pretty excited,” sophomore wide receiver Jake Richter said following his impressive showing, “But we’ve got a lot of work left to do.”

Richter lead all receivers with five catches for 123 yards and two touchdowns, both from within the 10-yard line.

Both touchdown receptions came from the arm of junior quarterback Bryce Meehl, who went 15-30 for 215 yards, two touchdowns and no interceptions. A lackluster completion percentage (50 percent) was distorted by a flurry of dropped passes. 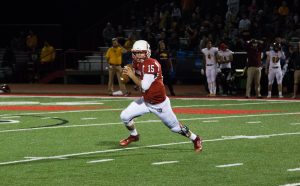 Allow me to reintroduce myself…

This marked the fourth year in a row MSUM opened up their season with a win, and it started with a bang.

After electing to receive the year’s inaugural kickoff, the Dragon offense took the field, and quickly converted a couple long third down attempts to keep the opening drive alive, including a slick connection over the middle to sophomore wide receiver Grady Bresnahan for 11 yards.

On the ensuing play, Junior running back Herman Gray saw a gap up the middle, slipped a defender, and didn’t hesitate — busting up the gut for a 53-yard touchdown run.

“The lineman did their job,” Gray said. “I saw an opening and I hit it, but all the credit to the lineman on that one.”

Gray went off for 99 yards in the first quarter alone, but he played a more limited role in the offense after getting banged up early in the second quarter. 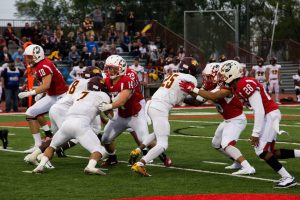 “He was banged up a little bit, but he was fine. Typical running back wear, and we were planning on playing running back by committee…I think we got exactly what we wanted game plan-wise.” Coach Laqua said.

The committee worked like a charm. The Dragons finished with 219 rushing yards, aided by a stellar performance from sophomore running back Zach Simons, who finished with 91 yards on 16 carries and a touchdown.

A new season usually spells new, unseen wrinkles in an opponent’s offense. What Minnesota-Crookston brought to town was something entirely different.

“They came out and played in an offense they never showed before. We didn’t practice for it. It’s a system we’ve seen once in the last three years,” Coach Laqua said Thursday night, positively glowing about the work of his team and staff. “Hats off to the defense and the defensive coaches…For them to adjust on the fly, get that coached up and only give up ten points, it’s just a tribute to not just the coaches, but the players. To all be on the same page, that was huge.”

The defense’s success was boosted by the sometimes sloppy and undisciplined play of the Eagles. Several big plays were negated by penalty, and MSUM took advantage of every slip up, stifling threatening Crookston drives in the second and third quarters.

Crookston’s junior quarterback Jalin Scott had 62 rushing yards at halftime, but he ended with a paltry 2.2 yards per carry (YPC) and -5 yards rushing in the second half as the Dragon defensive front clamped down on Scott’s scrambling ability.

“I think our defensive line played a great game…we found a couple tendencies, really picked up where we wanted to bring our pressure, we were able to keep him in our hip pocket.” Head Coach Steve Laqua said as he savored the Dragons’ fourth straight win over Minnesota-Crookston in as many years.

Whenever two separate running backs near or eclipse 100 yards on the ground, recognition must be given to the men pushing bodies in the trenches.

Like their defensive front, the Dragon offensive line was able to control the line of scrimmage for the majority of the game. Senior center Tyler Lazarz played a defining role in the showing, setting up his backs to continuously gash the interior defensive line of the Eagles.

Lazarz had a rough night snapping the ball, however. Snap trajectories were noticeably low, and on more than one occasion the ball ended up behind the quarterback.

Coach Laqua didn’t seem concerned. He was proud of Lazarz, who made his first collegiate start at the center position.

“It’s his first ever start at the position, so you cut him a bit of slack…there were a couple plays that weren’t all his fault. We can get better, obviously, but with it being his first time out, we’re totally fine.” Coach Laqua said.

When asked about how he handles those mistakes, Lazarz says he tries to take it in stride.

“In football, you deal with a lot of adversity looking forward to the next play. Just keeping that next play mentality, and not looking to the past dwelling, that’s most important.”

Lazarz, a team captain and vocal leader of the offensive line, appreciates the prospects of the win, but is ready to get back to work.

“It was a good team win, but we left a lot of points out there. There’s lots to iron out, and I’m excited to get ready for Duluth next weekend.”

No motivation, no activation: Only half of student organizations use DragonCentral