“Tonight, it was really about introductions,” said MSUM President Anne Blackhurst, “and making sure everyone around the senate table knows who we are and what we do.”

Senate’s second meeting of the year was a monthly “Meet and Confer” with President Blackhurst and her cabinet on September 13, 2018.

“It’s really a way to have a conversation,” President Blackhurst said, “And interaction between the representative voice of the students and the administration.”

Most of the meeting consisted of introductions, the outlining of senate and administration goals and some discussion of differing views on certain agenda items.

The agenda was mostly agreed upon, but there was some contention with the issue of parking. This year a section of the general parking lot was changed to a reserved lot, designated “R-4.”

Chair of Legislative and Internal Affairs at Student Senate, Marcus Mergen, has made the parking issue a priority since spring semester 2018.

“Last year at the beginning of April we were approached by Jean Holler and the new Public Safety Director Ryan Nelson,” said Mergen. “They talked about the new changes that would be happening on campus.”

Among these changes was the expansion of reserved parking for one year.

“We advised that we shouldn’t change the lot,” Mergen said. “And we felt that we were not presented with a strong reason to do that change.”

Despite Student Senate’s recommendation, Mergen said the administration went ahead with the change. During the “Meet and Confer,” Mergen and Hollaar had a levelheaded discussion on their two different viewpoints on the change.

Hollaar claimed students were confused about the status of the current R-4 lot when a section was general parking last year. She cited the excessive number of parking violations students with general passes received in the lot. She also pointed out the lack of reserved parking on the North side of campus if the lot were to be changed to only general parking. 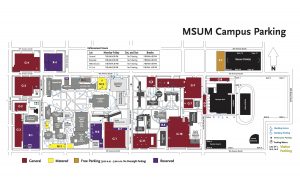 “I still want a definite reason [for the change],” Mergen said. “The reason that we’ve heard a few times now is that students were getting parking violations for parking in the R-4 lot, and I feel that instead of just blocking off the entire lot for reserve passes, there are much better ways to go about this.”

Mergen points out that one of these solutions might be more visible signage, and a clear indication that only reserved passes may park in certain spots. His real concern is how much use reserved-pass holders are actually getting out of their newly acquired space.

“This year we got back, and the first thing we saw was that the lot was half empty,” Mergen said. “I also felt there wasn’t enough student input on it…general passes are primarily purchased by students, and that faculty usually get reserved.”

Hollaar says she plans on meeting with Mergen and other senators to discuss the issue at length.

“I think in general [Meet and Confer] went well. I think for a particular agenda topic I didn’t have a good understanding of what the issues were, so I certainly wasn’t prepared to address the students’ concerns,” said Hollaar. “As President Anne pointed out, with those types of issues it’s probably best to have a small group have a conversation about it, and then maybe come to [the senate meeting] with it, rather than start off with Meet and Confer. I think hindsight is always 20/20.”

Mergen and Hollaar have since discussed coming together to talk about the issue at a later date. Hollaar said a few other senators and new Public Safety director Ryan Nelson will also be invited.

Hollaar said the decision was based on the recommendation of the Parking Appeal Subcommittee, when they saw that students were confused by the distinction of reserved and general parking in the lot. She said before this meeting there had been one complaint, but now realizes there is more student concern over the issue.

Though she admits it is a longer walk, Hollaar encourages students to use the general parking on the East side of John Neumaier if there are no spots on the West side of campus.