The Fargo-Moorhead community came to MSUM’s campus, welcoming applicants as they were sworn in as new citizens in honor of Constitution Day.

On Sep. 13, MSUM hosted the annual naturalization ceremony. There were 103 people from 34 countries confirmed as citizens of the United States in the CMU Ballroom.

Patriotic music played in the background as members of the community filled the room. Friends and family of the applicants came to support their loved ones, and students from universities and public schools attended for the learning experience.

The ceremony is held every year on Constitution Day and started with Dr. Andrew Conteh, a retired professor of political science. All educational institutions that receive federal funding are required to hold an event that honors Constitution Day.

Bezbaruah was naturalized in the past and spoke about what becoming a citizen of the United States meant for her.

“Becoming a citizen opened doors for me and my family. I’m really proud to be a citizen of the U.S,” she said.

Hamida Dakane, 28, was one of the applicants and felt pride for her new status as well. Dakane is from Kenya and came to the United States in July of 2011 for educational opportunities. 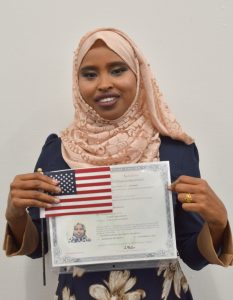 She studied emergency management and international studies at NDSU and graduated in 2017. She is currently a graduate student at the University of Mary and is studying public administration with an emphasis in energy.

“It means more responsibility in every aspect of life. Every day,” she said on the importance of being fully engaged in our democratic society. “It feels good. It feels like I have more of a voice than before. I can speak on issues that maybe I couldn’t before.”

Now Dakane is working with the Democratic Party of North Dakota and appreciates the timing of her citizenship, especially after the last general election. Mayor Del Rae Williams, Moorhead City Council Member Sarah Watson Curry, and former MSUM student Samira Abdi were among the many friends who came to support her.

Ridgway swore in the applicants by administering the Oath of Allegiance. The applicants stood with their hands raised and recited the oath along with him. After the recitation, the applicants were then citizens of the United States of America.

“Many of us take our citizenship for granted,” said Kathleen McNabb, an administrative executive at MSUM. “These soon-to-be new Americans have gone through a multistep process. They probably know more about our constitution than we do. And so it’s kind of inspiring to see how they value it and how some of us maybe take it for granted because we’ve always had it.”

McNabb has helped organize the event for the past eight years and works behind the scenes with the U.S. Citizenship and Immigration Services (USCIS) and Braden Kuznia, Assistant Director of Event Services at the CMU, to make the ceremony happen.

“The emotion and the pride and the work that these new citizens have gone through to get to this day is really, really emotional. So it’s tingling to see this happen,” McNabb said.

Swordfights are not a thing of the past: Local historic group visits Dragonfest