In the basement of Langseth Hall, a second move-in day is taking place.

The new tenants are aquatic organisms, and their new home is the Marine Lab, a student-led research lab advised by Dr. Brian Wisenden.

In the beginning of September, the Marine Lab welcomed these new additions, including sea urchins, pipefish and horseshoe crabs. Some of the creatures are new to the lab, while other species have been there before, like the horseshoe crabs. The new arthropods are the size of dinner plates rather than the phone-sized critters the lab had previously, surprising both the staff and post office.

“The post office was a little alarmed to find large styrofoam boxes creaking around when we got our three large horseshoe crabs,” senior ecology and evolutionary biology student Mark Lueders said. 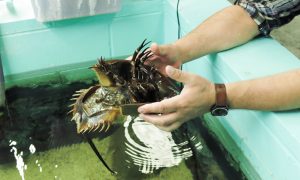 The new organisms are settling into their homes alongside the stingrays, snowshoe eel and sea stars that were already there. The Marine Lab is also expecting a shipment of moon jellies in the next few weeks.

In addition to being a home to marine creatures, the lab also serves as a calming learning environment for the students that take care of these animals.

“In between classes when I’m not doing anything, I’ll go down there and just sit,” Savanna Hohenstein said.

A junior majoring in ecology and evolutionary biology, the Marine Lab presented Hohenstien with an opportunity to connect with a lifelong interest when she joined her freshman year.

“I’ve always been interested in marine biology, but in the middle of Minnesota you can’t get that,” Hohenstein said. “When I came here, I was just going to go with a biology degree to see if I actually liked it, and then somebody approached me and asked me about becoming involved with the Marine Lab.”

Now, Hohenstein is very involved with outreach, as she manages the Facebook group and leads many of the tours.

Lueders, who joined the Marine Lab this semester, is excited about this unique chance to work with marine creatures he would otherwise never see up close.

“I think it’s another great extension of MSUM’s opportunity to do research and get hands-on experience,” Lueders said. “My freshman year already I got to do research with (Wisenden), and now I get to be a lead on a display in a marine tank. That’s not going to happen at a lot of universities in Minnesota or in the Midwest in general.”

The Marine Lab students help with tank design, feedings, water changing and giving tours to everyone from preschoolers to college students. Last year alone, they logged over 2,500 guests from tours and open houses. Of course, the students always make sure visitors leave with plenty of new facts. 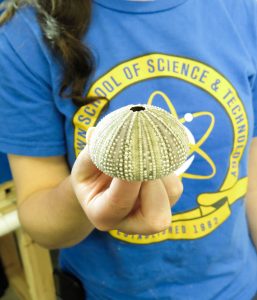 “We usually explain the high tide/low tide and how it works,” Hohenstein said, referring to the tide program implemented by a physics student last year. “We pull out some of the organisms like the sea urchins and sea stars, and pass them around, and explain what they are and different features about them. They ask questions, and hopefully we can answer them.”

Hohenstein and the other students are also working on setting up a live camera feed so that everyone has constant access to the animals.

The live feed and new creatures aren’t the lab’s only exciting news, though; Hohenstein and Lueders are both helping to found a marine ecology club on campus. Their goal is to get more students involved through this fledgling club to create a sustainable base for the lab to grow.

“Hopefully we can keep developing (the Marine Lab) since we still have more space and more tanks to fill,” Hohenstein said.

The past few weeks have already provided learning opportunities for Lueders, who plans to go into either teaching or research after obtaining a Ph.D.

“This is an opportunity to work on curriculum development for a range of different students and [it has] the obvious benefit of just learning how to work with other people and manage a display for aquatic organisms,” Lueders said.

The Marine Lab has also given Hohenstein a nudge to pursue her future. Being a Minnesota native, she was unsure if moving to a different state to pursue marine biology was worth it. Now, she knows it is.

Mexican Food Serves Up Knowledge and Perspective for Students