The banner and a written statement were outside of the Women and Gender Studies department door. Kandace Creel Falcón, professor of Women and Gender Studies, said the “open-letter” was hung to start a conversation about the importance of ethnic studies on campus. The banner was in response to rumors that the American Multi-Cultural Studies (AMCS) department was to be shut down. 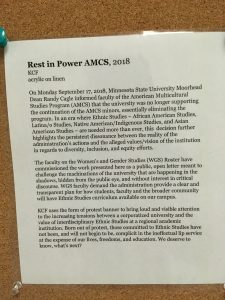 “I think a lot of us are confused,” Creel Falcón said. “Part of the reason why I decided to make a public statement about the elimination of the AMCS program is because I feel like that decision has largely been made outside of public discourse.”

The written statement next to the banner read that Dean Randy Cagle “Informed the faculty of the AMCS that the university was no longer supporting the continuation of the AMCS minors.” On Monday, Sept. 17.

Randy Cagle, Dean of the College of Humanities & Social Sciences, said the rumor was based off of a miscommunication.

“I fully support free speech, but I just want to make sure that people don’t get panicked and [know that] no decision has been made at all,” Cagle said.

Although no decision has been made on the AMCS minor’s removal, Cagle said budgetary constraints are forcing the department to make cuts.

“With the budget being like it is … certainly we’re taking a look at all programs that have fairly low enrollment,” Cagle said. “This isn’t going to be specific to any particular program.”

Creel Falcón accepts that this could have been a miscommunication, but said her statement is not about whether or not a decision has been made.

“I’m not saying that the decision has been made, but I am pointing out that decisions are in the process of being made,” Creel Falcón said. “That is what I take issue with, in regards to this campus community not knowing about the process…”

David Wahlberg, Executive Director of Marketing and Communications, said he is investigating the situation.

“I do know that the decision to close the AMCS has not been made,” Walhberg said. “What [Cagle] said to another party about that, I’m uncertain of, but I do know that that decision hasn’t been arrived at.”

Wahlberg went on to explain what factors are considered when cutting a program at MSUM.

“This really needs to be an on-going way of just doing business, of offering education that meets the needs of this region,” Wahlberg said. “The flip side of that is you must always be looking at the programs you are offering and asking questions, [like] ‘is this as relevant as it once was?’”

According to Wahlberg, the administration takes student interest and outside business community needs into consideration, among many other variables.

“We have a University Planning and Budget Committee, that involve representation from students, faculty and the other bargaining units,” Wahlberg said. “In the final analysis, the president is responsible to the board of trustees and the Minnesota State system.”

Though these factors are some of the main considerations when making these decisions, he also says that diversity education is important to the administration.

“One of our strategic anchors is to create a campus community that is diverse, inclusive, globally aware and just,” Wahlberg wrote in an email to The Advocate. “Our challenge is to engage in thinking that infuses these concepts across the entire academic experience. This expands the discussion beyond enrollment in a given major or minor and becomes a conversation about increasing awareness of these important concepts for all students in all disciplines.”

According to Creel Falcón, around 2014-15 the school went through a strategic realignment process, where many programs were combined. During that process, the AMCS was rolled back from a major to a minor.

Wahlberg said that though this is a valid argument, there’s been no conclusive evidence that funding a program with extra dollars will automatically increase enrollment.

Creel Falcón said that the decision to display the banner came after she had raised concerns to the administration about similar issues through individual correspondence.

“I see this as one public form of challenging us all to think about whether or not we value the role of ethnic studies on our campus and in our broader community,” Creel Falcón said.

“We did take it down because of a complaint,” Ryan Nelson, Director of Public Safety said. “The poster did not comply with University policy. The poster was returned to the department.”

The policy cited that any postings on bulletin boards must be smaller than 8.5” x 11” unless previously approved by the Office of Facilities and Administration. It is found under the statement “For all bulletin boards other than those reserved for specific departments, programs or organizations, materials may be posted according to the following provisions” on MSUM’s website. It can be found here.

Creel Falcón has since replaced the banner with several 8.5” x 11” copies of the banner to comply with the policy, which she interprets differently. She believes the policy applies to campus-wide, and not departmental boards such as the one outside the Women and Gender Studies office. 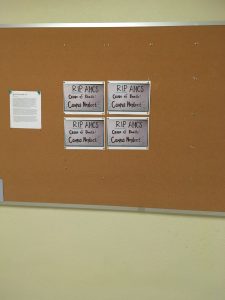 “I have not gotten the sense at this point that there have been any formal plans for a public conversation about it,” Creel Falcón said. “I could be wrong about that…the tricky thing that I have raised a question, and it’s difficult for me to answer questions because I’m not the decision maker. I’ve simply tried to open up the conversation.”

With Warnings about a Level 3 Sex Offender near Campus, Public Safety Talks Security