Neon is the New Black: The Return of the 90’s

It’s 2019, and we have iPhones and Cardi B. However, many millennials find themselves breaking out their portable CD players and wind breakers because when we can party like it’s 1999, it doesn’t matter that we are “living in the future.”
Haley Shoemaker, 29, an MSUM public relations and advertising student, isn’t surprised about this ‘90s comeback. It was a time before smartphones and Facebook. You weren’t as “plugged in” as you are today. Things took longer, like signing on to AOL Instant Messenger or trying to download a song off LimeWire.
“People look back and see it as a simpler time,” Shoemaker said. “I think people are really prone to nostalgia.”
Wouldn’t it be amazing to relive that joy brought on from running home after school and playing PlayStation until the new episode of “Doug” came on?
“Because that’s what people want more than anything—that there is going to be another day, more or less, like this day,” Shoemaker said. “That feeling of continuity.”
Joel Powell, an MSUM sociology professor, likes the thought of generational revivals because it proves the idea that pop culture can’t stand the test of time wrong. However, you have to keep in mind where you are seeing the revival take place. According to Powell, most often these revivals can be seen in current music and fashion. 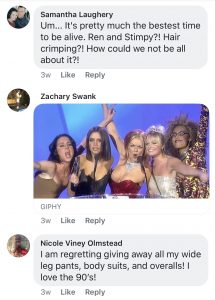 Is this ‘90s resurrection something demanded by the public, or did companies see an opportunity to cash in on some big bucks by appealing to the ideals of the millennial generation? For Powell, he isn’t surprised at the idea of a ‘90s revival, especially with millennials reaching an age where they generally have more disposable income.
“Everyone should be marketing to them,” Powell said.
Powell does think that in some cases it isn’t all about the money. For example, when it comes to the upcoming Spice Girls tour, Powell thinks money is not the main focus. It is more about the people organizing the tour, who love what they do, and the fans who want to come together to see a band they enjoy. 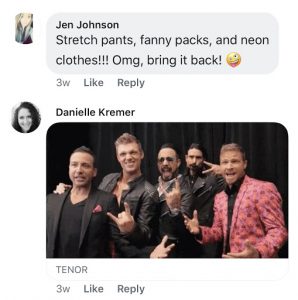 “There seems to be a trend towards more and more consumerism, and less and less content quality,” Shoemaker said.
It makes sense to make another “Jurassic Park” movie, knowing it will make money, rather than risking the chance of using an original idea that could lose money.
Shoemaker believes that when it comes to zany fashion choices and silly cartoons, there isn’t any harm in reliving the ‘90s. Shoemaker knows some things are meant to stay in the past, such as the former treatment of the LGBT community, as we have come so far as a society.
“There are definitely things we left behind,” Shoemaker said. 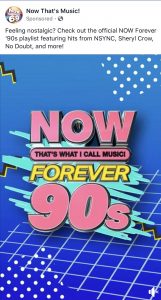 Powell believes that the world today is a brutal place, and if millennials are going through a ‘90s revival, we should let them.  Millennials are the ones who have to deal with a lot of the problems going on, such as the collapse of the biosphere. The ‘90s at least had more positive values than other generations, which could help in solving some of the issues we have today.
“You know what I would be worried about? ‘50s nostalgia,” Powell said. “The ’50s had nothing redeeming about it.”

Whether a ‘90s comeback makes you scream “as if!” or you think it’s “all that and a bag of chips,” it does appear to be pushing its way back into society. Powell said he expects even more coming, with a more comprehensive comeback taking place in four to five years. You can either turn up your Walkman and jam out to the Backstreet Boys, or you can step aside and let the millennials have their fun.