Oh, how the tables have turned.

The vinyl resurgence has independent record store owners glad to see music listeners recognizing the value the medium has provided for decades.

Brady Bredell, owner of Mother’s in Moorhead, Minnesota, has grown up around records. Bredell’s father bought Mother’s from the original owners three years after the store’s opening in 1970. Getting to grow up in a record store is what made Bredell take interest in vinyls and record collecting. The first vinyl Bredell collected was a John F. Kennedy tribute album which he cherishes, as JFK is his favorite president.

At age 16, Bredell began working at Mother’s knowing he would like to take over the business from his father one day. About 11 years ago, Bredell became business partners with his father. He became the sole owner in 2011.

Bredell believes the value of music vinyl can provide over streaming sites is part of the reason for the vinyl revival. He explained that listening to music on vinyl gives a closer representation of what the music sounded like in the studio when it was recorded versus studio-replicated sound that is heard a lot more often in modern music. 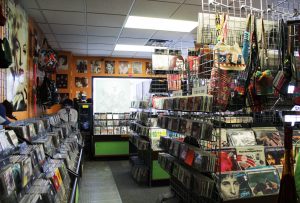 While genres that include digital elements—such as electronic or hip-hop music—may be better sounding on digital platforms, music that is made with real instruments will never sound as good on digital as they will on vinyl. There is nothing digital about real instruments, Bredell said.

“You are hearing the music how it is meant to sound,” Bredell said of listening to vinyl.

Along with getting a better quality of sound from a record, vinyl allows an artist or band to fully express the vision they want to share through their music.

Bredell explained that with streaming sites, people no longer have to listen to a full album. People will pick and choose what songs they want to hear from whatever album instead of taking the time to listen to an album from beginning to end. Artists and bands take the time to record an album and create a story they want to share with the world. When listeners only listen to select songs off an album, they aren’t fully hearing the artist’s vision. 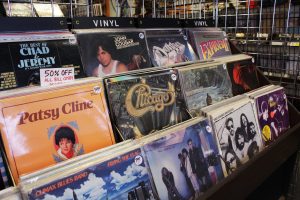 Especially with a concept album where it is structured around a central theme or narrative, it only makes sense to listen to the album in full from the beginning to the end, Bredell said. While you may be able to listen to a few songs that you want off an album by streaming them, you don’t get to experience the music how the artist intended.

Bredell said with vinyl increasing, he sees a variety of ages coming into Mother’s. However, he finds it interesting that the older customers one would expect to be buying vinyl are actually wanting and buying CDs, while the younger customers are buying vinyl. Bredell said it’s fun watching teens and college students come into the store with their parents and watching the connection parents and their kids make while looking through the vinyls. He sees parents coming across records from their youth and sharing the memories the music brings back with their children.

Bredell believes vinyl will be around forever. He compares vinyl records to boo 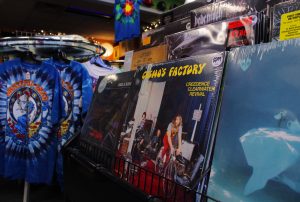 Aaron Swinkels, co-owner of Vinyl Giant Records located in Fargo, North Dakota, noticed the demand for vinyl prior to opening Vinyl Giant. Swinkels originally owned an antique store, Junk Giant, that featured a vinyl record section. But as time went on, Swinkels noticed the sales of records increasing while the rest of the antique sales decreased. Swinkels decided to open a separate record store and went on to open Vinyl Giant in 2015. He eventually closed Junk Giant to focus on Vinyl Giant. 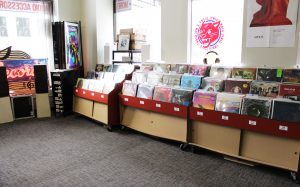 Swinkels has been collecting records for over 25 years. He inherited a lot of the records in his collection from his mother. Swinkels grew up listening to his mother’s vinyls. He remembers being a kid listening to Michael Jackson’s “Thriller” album and dancing to “Beat It” from the album. He believes people today are looking for these active interactions with their music.

Swinkels said there’s nothing more artificial than tapping a screen at an invisible button to play music. To have a connection to the music we are listening to, we need to be actively involved in the music, which is what vinyl provides over streaming services. 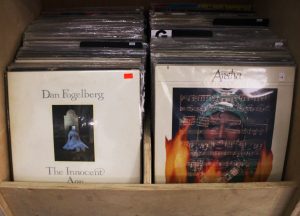 The whole process of listening to vinyl requires active engagement, Swinkels explained. Going to the store, the listener has to physically browse the albums, place the vinyl record on the turntable and flip the record over to hear the rest of the album. This allows the listener to connect to and feel the music they are listening to.

Swinkels said there’s nothing more magical than connecting with others at a record store. Being able to discuss music, compare thoughts on certain albums and recommend or ask for recommendations on albums are all valuable when discovering music. 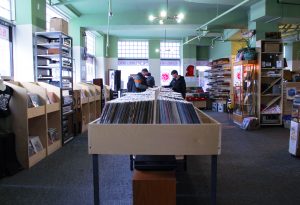 Especially with a diverse customer base, it’s not hard to find new perspectives at Vinyl Giant. Swinkels said the vinyl resurgence has brought in customers as young as 13 years old to people over 70 years old.

According to Swinkels, nothing can beat the human interaction that record stores can provide.

The discovery process of finding new music is what makes vinyl more engaging than streaming music. Swinkels explained that by going into a record store and looking through crates of vinyls, you can come across albums or artists you’ve never heard of and take a chance by buying the record without previewing the music. At Vinyl Giant, about half of the music in the store is music you can’t find online.

These connections a music listener can make with music and other people will only keep vinyl alive. Swinkels said the people who love vinyl and vinyl collecting have always been around, despite how many comments there are about vinyl being a dead medium.

Brady Bredell said if you want to listen to a good concept album, he suggests one of his favorites, “The Downward Spiral” by Nine Inch Nails. The album had its 25th anniversary earlier this year on March 8.

Aaron Swinkels said one of his favorite albums at the moment is “3 Feet High and Rising” by De La Soul. Unfortunately, the album is not available online due to a contract that says the album can only be released on vinyl and cassettes. SoundCloud user AaronE (not affiliated with Aaron Swinkels) has uploaded the majority of the tracks from the album.

To check out the record selections at Vinyl Giant Records and Mother’s, you can find the stores at these locations: 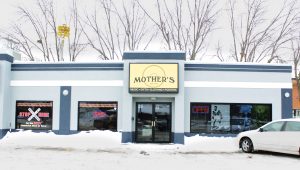 Neon is the New Black: The Return of the 90’s