On April 25, 2019, MSUM’s Art Gallery held an opening reception for “Picturing Nam,” a National Archives Exhibition. The exhibit is on display in MSUM’s Art Annex.

According to Shireen Alemadi, the assistant director of community engagement at the art gallery, over the past year, MSUM has hosted multiple events related to the conflict, with “Picturing Nam” as the culmination of these events. 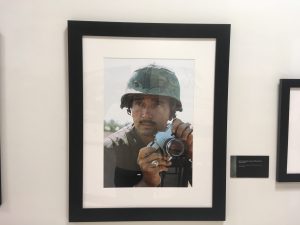 Wendy Fuglestad, gallery director at MSUM, explained that the exhibit originates from the National Archives and travels across the United States. Prior to being displayed at MSUM it was on display at Patriot’s Point in South Carolina.

“It was kind of interesting,” Fuglestad said, “As this show has come up it has actually spurred a lot of conversation with my dad. I didn’t really know much about his service.”

Retired MSUM Professor Camilla ‘Cami’ Wilson visited Vietnam during the war both as a member of the Red Cross and as a journalist. She gave the opening remarks for the reception presenting the exhibit. Wilson explained a little bit more about the exhibit and gave a brief history of the background of the conflict.

“The military completely controlled what people could take pictures of as well as what they could do with them afterward,” Wilson said. “These are the photographs that are what the military was willing to put out. These are not the photographs many of us think about when we think about the images of the Vietnam War. They are all compelling and ones that I hope you will look at and internalize. I just hope they will help you to look further as well.”

During her remarks, Wilson described growing up in Mississippi with segregation and her experiences in Vietnam. Wilson said that the first thing she noticed on coming to Saigon in Vietnam was that the children hated Americans.

“Evidence of corruption, prostitution and a black-market economy [was] everywhere in plain sight while the American military presence looked on taking no action,” Wilson said.

She mentioned parallels between the Vietnam War and the Civil War and spoke of the Confederate flags she saw displayed by American troops in Vietnam. She also spoke of how when she came back from Vietnam, she suffered from post-traumatic stress disorder and had a hard time sleeping at night. She described how she would start the night in her bed and always end up sleeping on the floor by morning. Wilson’s mother didn’t want to know what she had learned, but Wilson said that she didn’t go to Vietnam not to see.

“Like most people who suffered loss, I wanted us to learn something from the experience,” Wilson said. I never stopped thinking there must be another way, as yet another war breaks out … Vietnam was a lesson in forgetting.”

William ‘Bill’ Henderson is a Vietnam veteran from Lisbon, North Dakota who was stationed in Vietnam from 1970-71. He said that Wilson’s remarks were “foreign” to his experiences in Vietnam and said this was probably because she was in the area near Saigon. Henderson said that he did not have contact with civilians while he was there because of where he was deployed. As Army infantry, he did not have a respite to interact with civilians.

Henderson published a memoir of his time in the Army called “Walking in the Shadow of Death” in December 2017. He was inspired to write down his memories because of the Tim O’Brian book “The Things They Carried” which was not accurate to his experiences in Vietnam.

Henderson said that when he got home from the war his mother handed him the letters he had written home and said he might want to read them. Henderson took the letters and burned them. Looking back, Henderson regrets doing that because of all the history that was lost when they were burned.

He said he never would have attended an event like “Picturing Nam” before writing the book, as writing it helped him purge his psyche.

“Picturing Nam” will be on display until May 25 in the Art Annex of MSUM’s Center for the Arts.