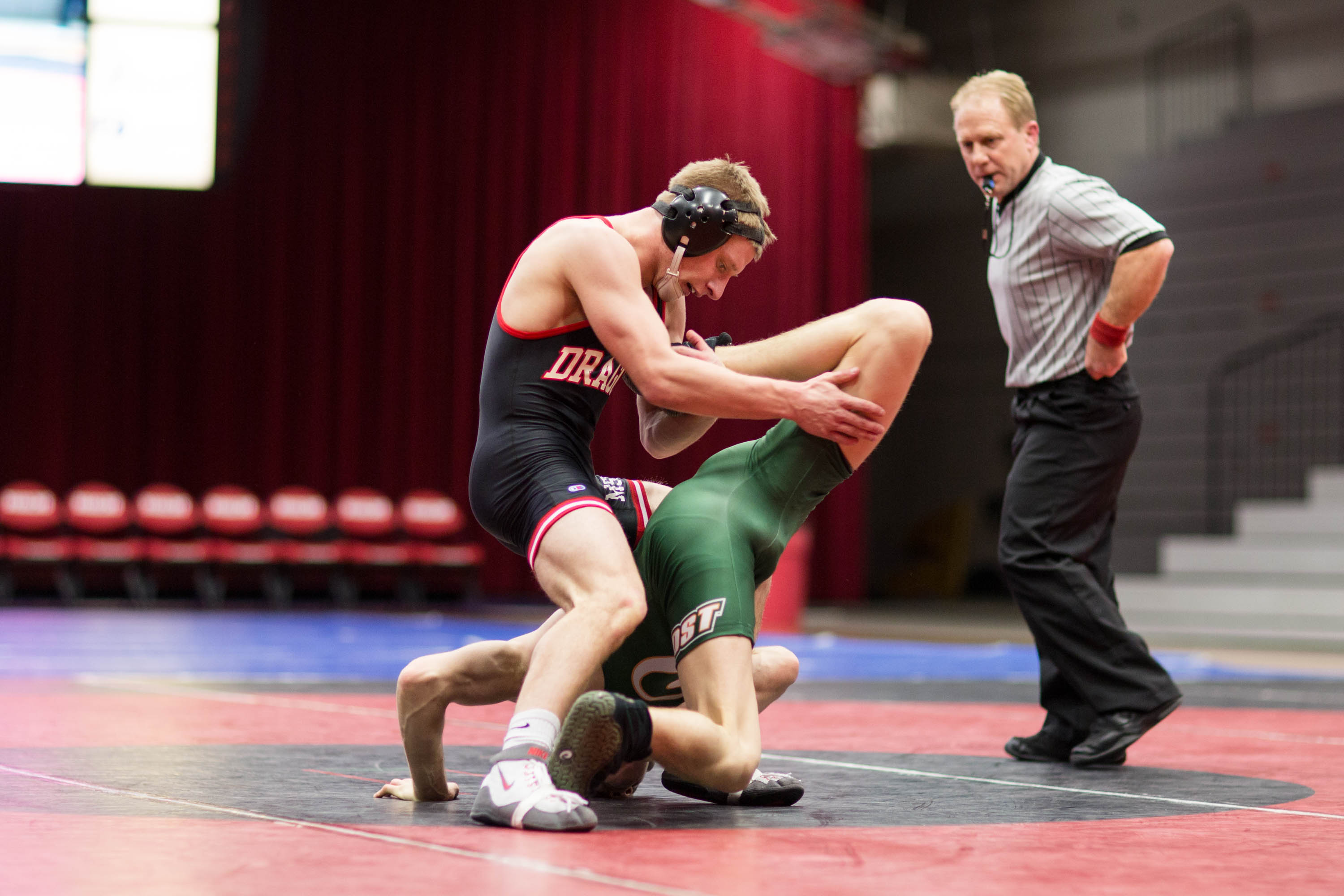 Wrestling is more than a sport – it’s a demanding lifestyle. Every athlete wants to be successful, but the success of a wrestler depends on more than competition. What a wrestler eats, weighs and does with his time and energy is crucial to a season’s success.

Junior captain Blake Bosch, eyeing a second all-American finish at the Division II National Wrestling Tournament in New York, has a competitive foundation built around daily discipline, an unmatched work ethic and a love for the lifestyle.

Dozens of variables factor into an athlete’s success. At the collegiate level, one of these often overlooked is a genuine love for the game.

Most college athletes have been competing their whole lives, and many get burned out. Bosch’s ability to maintain his passion is what the Wishek, North Dakota, native thinks is responsible for his success.

“I was just another 4-year-old kid with too much energy,” Bosch said. “My parents finally had enough and signed me up for wrestling. Once I got into it and saw how big it is in a small town community, my whole family couldn’t get enough.”

But Bosches weren’t always big on the sport. His father and uncles were never in wrestling, and his only siblings were two sisters. The experience was as new to the Bosch family as it was to Blake, but they matched Blake’s love for the sport from the stands.

Whether Bosch is wrestling at Nemzek Fieldhouse, his old high school gym or any tournament around the country, the Bosch family is there — sitting in their portable bleacher-chairs, cheering for anyone with a Dragons logo.

“He comes from a great family,” head coach Kris Nelson says. “They rarely miss a match; they’ve seen us in Arizona, New York, California and probably others. Our program is very lucky to have them.”

That kind of encouragement is the reason Bosch says he will always love wrestling. Every day, he’s excited for the opportunity to improve. For someone who’s done his fair share of winning, that’s an irreplaceable quality.

Bosch is no stranger to getting his hand raised. The 133-pounder’s collegiate record sits at 60-31 in three years — with two trips to the NCAA tournament. In high school, Bosch finished with three state titles and two second-place honors. He graduated with the most wins in North Dakota state history, but his career record of 240-26 was passed last year.

Winning led to recruiting letters from all over the Midwest. Division I universities like NDSU, Oklahoma St., and others in Minnesota took notice — as did local powerhouses St. Cloud State, Augsburg and most every school with wrestling in the Minnesota-North Dakota area.

But Bosch’s ties to MSUM were stronger than they were to other schools. One of the best wrestlers to recently go through the Dragon program, Corey Ulmer, is one of Bosch’s idols and best friends. Their friendship helped Nelson land one of the bigger recruits of his career.

Bosch’s decision never swayed. Nelson’s ability to relate as a small town North Dakotan from Lisbon and Ulmer’s persistence were more important than other schools’ offers. This is where he’d be happiest, he said. This is where he belonged.

“He comes in to work every single day,” Nelson said. “He’s giving every last thing he’s got, and he’s enjoying himself. Does he have bad days like everyone? Of course, but instead of putting his head down and feeling bad, he learns something from it and corrects it.”

Bosch knows he only has a few years left doing what he loves. There is no professional wrestling league he could join after college. Other than opportunities for a small number of Olympians, this is the highest level of wrestling competition, and the window to accomplish his goals is closing.

“Being my third year at MSUM, I’ve gotten a better understanding of the college level and what I want to do here,” Bosch said. “I worked my ass off last year and finished eighth, which is great, and I’m proud, but I want to be a national champion, and I have to work harder if that’s to happen.”

Nelson and new assistant coach Steven Monk see Bosch’s dedication every day. Both of the former NDSU Bison have seen many national champions in their coaching and competitive careers. Monk sees similarities in Bosch that he’s seen in other champions during his time.

“It doesn’t matter what division or level you’re at.” Monk said. “The great ones bring an intensity and a mentality that they’re going to win, no matter what situation. Blake has that in him.”

Nelson, a former NCAA champion, said there aren’t many wrestlers deserving of national titles like Bosch.

“Blake’s the backbone of this team,” Nelson said. “He picks up his teammates when they’re down in a way coaches can’t … I can’t say I’ve seen many great wrestlers in my career work as hard as him.”

Bosch not only lives the wrestler lifestyle, he embraces it. The cold walks to start his car for morning practice, the days before weigh-ins, the oft-portioned meals — he attacks those tough moments with a smile. It’s the Bosch mentality.

Bosch and the Dragons travel to St. Johns University Wednesday for their first away dual of the season. Home meets with Long Island Post University (NY) Friday, and the Dragon Open Tournament, Saturday, wrap up the team’s first semester of competition.