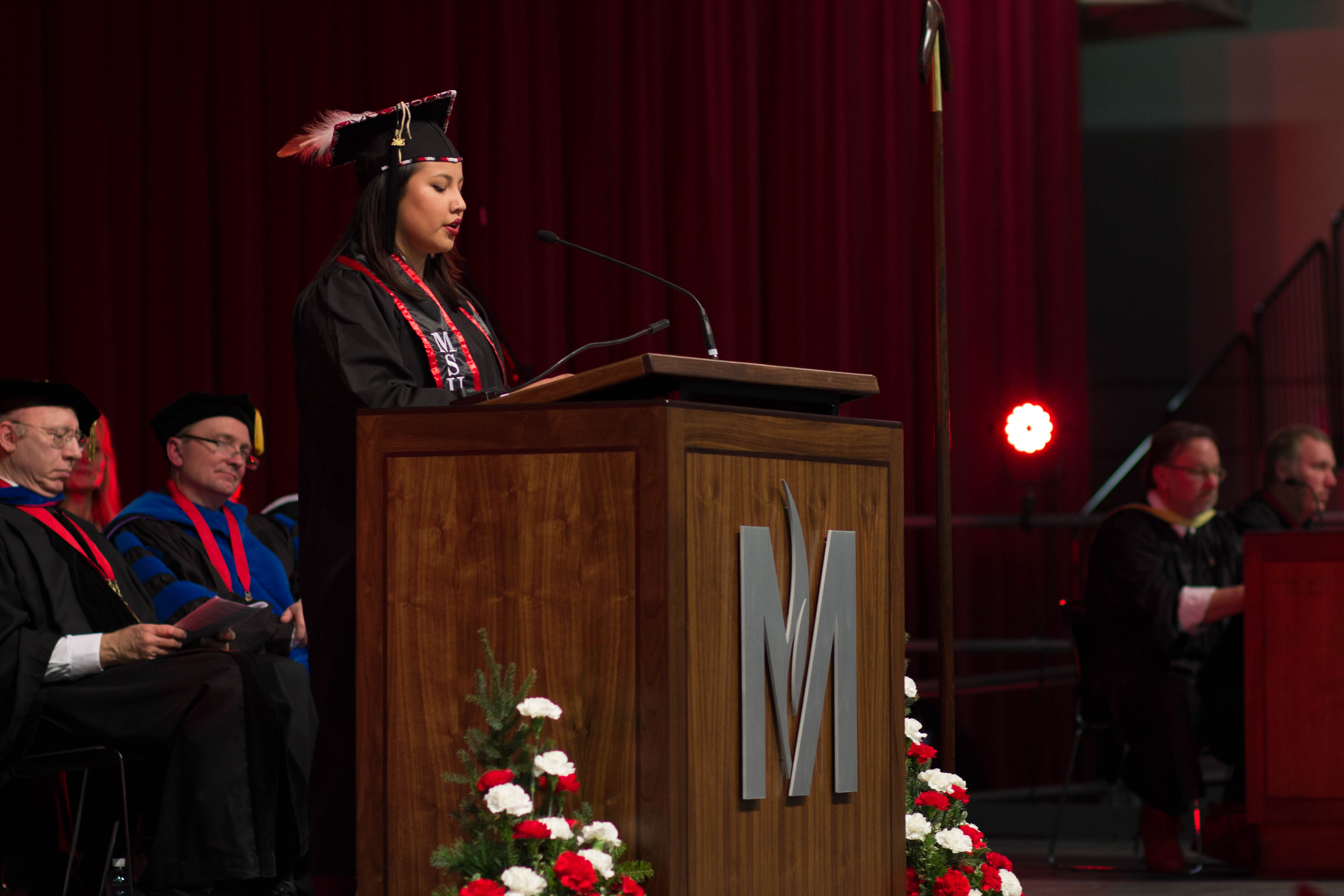 Grit, humility and heart are values Cera Swiftwater spoke of in her student address during fall graduation’s December commencement ceremony. Swiftwater has internalized these through her own experience, struggle and time at MSUM.

Swiftwater credits her grit to being raised by a single mother of five on the Pine Ridge Indian Reservation in South Dakota.

“When you come from a place that has 90 percent of the population living below the poverty line, you have a bit of an uphill climb,” Swiftwater said during her speech.

Swiftwater quoted a statistic that American Indians make up only 1 percent of people who acquire a baccalaureate degree. She said that didn’t stop her from pursuing a higher education at MSUM.

Humility, for Swiftwater, comes from being the only student in her 12-person high school graduating  class to attend college and not drop out after the first semester.

“It was at that point that I realized I was in the position to make a difference,” she said. “I was not going to let that pass by.”

At first, Swiftwater was homesick and missed her family. But she found a new sense of home in what she calls her “Dragon family.”

“MSUM has helped me channel grit, humility and heart within my life and has given me an identity instead of being ‘just another dropout from the reservation,’” Swiftwater said. “I am that 1 percent that has earned my degree.”

Swiftwater said she was nervous to give her speech, but “all in all it was a good and fun experience.”

Looking back, Swiftwater said she wishes she had attended more intramurals and events, and socialized more as a freshman instead of being “fairly shy at first” and “not as involved.”

“I think I really took for granted those events once I got closer to graduation,” she said.

Swiftwater was more involved after her freshman year and joined the National Guard and American Indian Student Association where she was later “volunteered” as president.

“I just went to a few meetings, and then we were voting for officers, and someone said, ‘Cera, you should be president,’” Swiftwater said. “That was basically how it happened. But once I got the hang of things, it became a big part of my life that entailed a lot of responsibility.”

Swiftwater graduated with a degree in criminal justice, but that wasn’t always her plan. She was interested in computers during high school, which led to computer information and technology being her original major.

“As it turned out, I wasn’t as computer literate as I thought,” Swiftwater said. “The classes and things that were being taught just weren’t clicking with me.”

After talking with advisors and professors and taking other classes, she found criminal justice to be a better fit. She changed majors at the end of her first semester.

“That was probably the best idea I ever had,” she said.

She plans to someday move back to Pine Ridge and open her own crisis center and women’s shelter on the reservation.

“I know that’s going to take some planning and probably won’t happen until later on in life,” Swiftwater said. “As of now, I’m still trying to adjust to a full-time ‘adult’ job. I do think grad school is in the future. I know a B.A. is not the end of my education.”