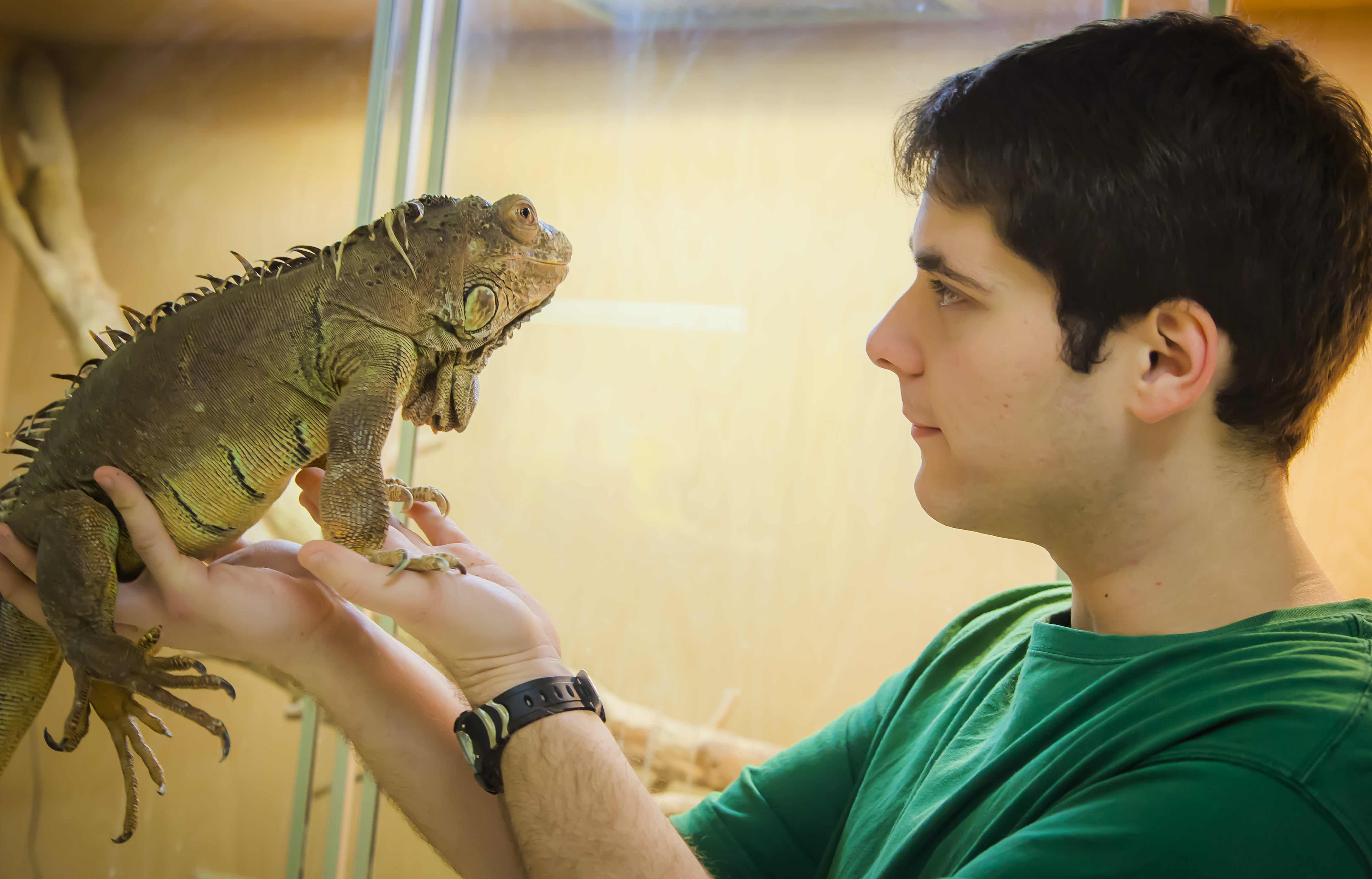 His days were spent wandering the hallways of Langseth, basking in sunlight, eating raspberries and watching kids squish their faces against his enclosure. MSUM’s unofficial mascot and beloved iguana, Curie, was many biology students’ most adored peer.

So when news of his March 15 passing spread across campus and social media, students and community members alike grieved the loss.

“We’d been expecting this for probably a month or more at that point,” said Todd Nolte, MSUM’s laboratory services specialist. “Toward the end, he was just eating less and less.”

Curie’s death hit one alumnus particularly hard. Harrison Pantera was considered the lizard’s closest friend. Known within the biology department as the “iguana whisperer,” Harrison was Curie’s dedicated caregiver for three years before graduating in 2014.

“I’ll admit it, I talked to him a lot,” Pantera said. “I just liked to sit there in his company and feel connected to him.”

Curie’s life contributed to a long line of MSUM’s resident iguanas, which stretches back into the early ‘70s. He was first owned by a student before being adopted by the biology department in 2010.

“I interviewed for iguanas, went to several homes and finally found Curie,” Nolte said. “His personality stood out to me because he was a very tame iguana.”

Pantera met Curie the day the iguana was moved into Langseth.

“I was a new student … I didn’t know anyone,” Pantera said. “I identified with Curie’s apparent solitary nature.”

During his time at MSUM, Pantera visited Curie every day, taking him for walks outside on warm days, feeding him his favorite foods, letting him crawl on his head and showing him to elementary school kids as part of department outreach efforts.

“I loved sharing him with the campus and giving people a chance to see his personality,” Pantera said. “Knowing his non-aggressive nature, I got a kick out of seeing the occasional person who just couldn’t handle a loose iguana.”

Curie’s personality, he said, made every second with the iguana memorable and worth sharing.

“It was funny how he could not figure out the glass next to the door into Hagen’s library, which he tried to walk through many times,” he said.

A memorial collage now hangs on the window of Curie’s old enclosure.

“(People) come up to that poster, and I can see the sadness on their faces,” Nolte said.

Pantera last visited the enclosure in November when he stopped by campus to see old friends, Curie included. He said he’d been nervous the iguana may not recognize him.

“He … climbed up my sweatshirt onto my back, as he had done many times before,” Pantera said. “I only spent a few minutes with him then, but now I feel extremely lucky to have had that chance.”

Nolte is searching for a new iguana to take Curie’s place. He said he’s considering adopting from a rescue.

“It would have to be friendly,” he said. “That’s why I’m a little wary … because you don’t really know if they were mistreated, if they haven’t really been handled or if they are wild.”

The department’s hope is to have a new iguana before the semester’s end. Though more lizards will follow Curie’s tenure as campus’ resident ‘dragon,’ the impression he left won’t soon be forgotten.

“I’m grateful for the three years I spent with him and for the … gift he gave me my first year — a sense of connection in the strange, lonely new environment of college,” Pantera said.

‘Welcome to Leith’ a chilling addition to Fargo Film Fest