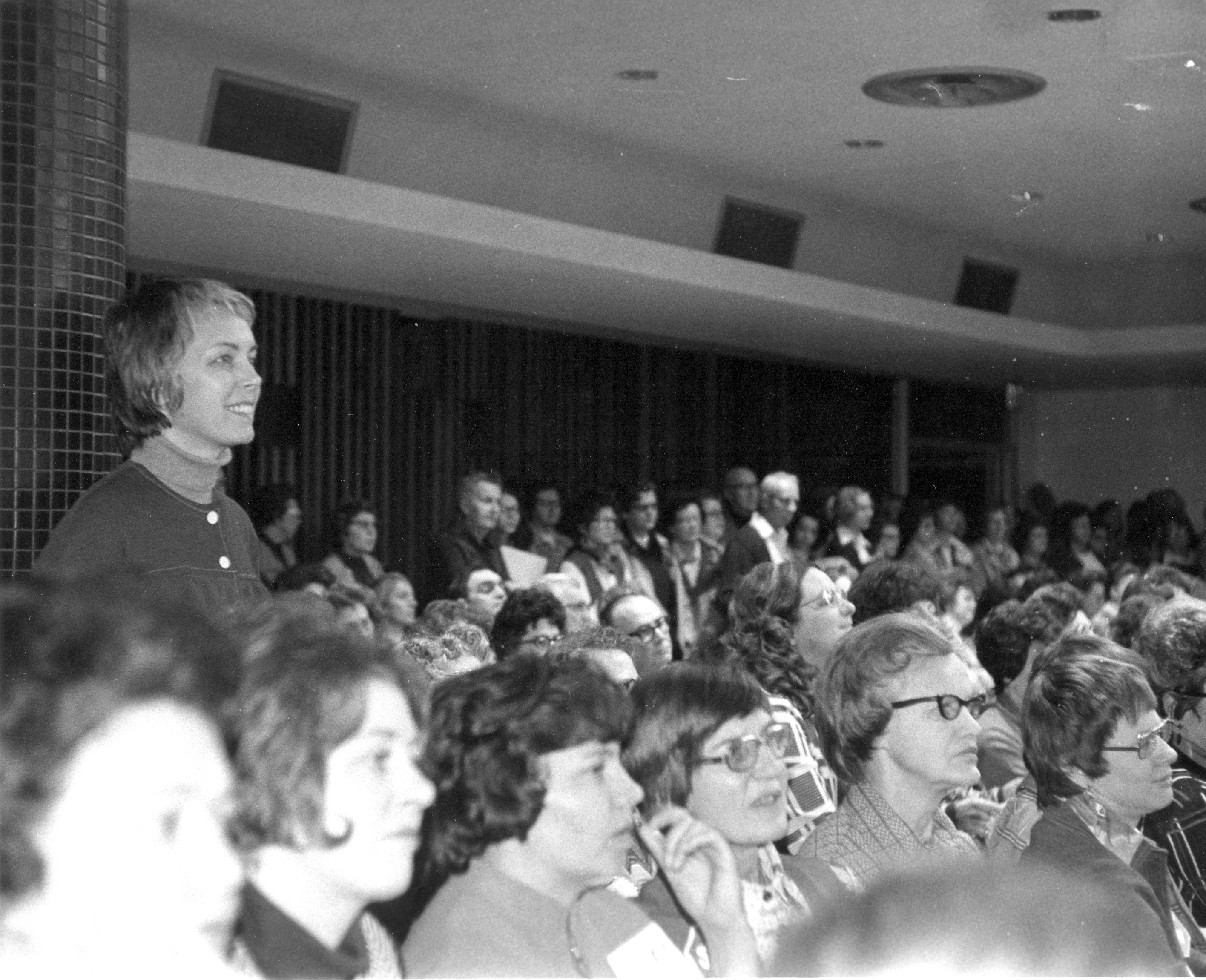 Women’s and gender studies program pioneer Sylvia Morgan stands and waits to speak at a 1971 Equal Rights Ammendment debate she attended with students in Bismarck.

It’s been 45 years since Sylvia Morgan instructed MSUM’s first course in women’s studies. Her 1971 class was the first of its kind in Minnesota.

Women’s and gender studies director Kandace Creel Falcón is coordinating a “series of celebrations” to honor the milestone, including an event featuring a “larger-named speaker” which will take place in the fall.

Falcón, who teaches most of the department’s offerings, is also creating a timeline and collection of “herstories” from former program directors to commemorate the anniversary.

Specific milestones include the department becoming a minor in 1974 and acquiring its first director, Laurie Blunsom, in 2003.

2006 saw the program’s first majors. The first of them was Shannon Bacon, who graduated in 2008.

In 2011, the program’s name changed to women’s and gender studies, a title it’s maintained since.

Historically, the program has averaged 13 – 17 WGS students at any given time, but today, there are only a handful. Its faculty has reflected the number, and Falcón is currently the program’s only full-time professor.

“It’s not only my wish,” she said, “but the wish of many WGS-affiliated faculty members that we have a strong WGS program, which means a program that has the necessary resources and support to sustain more than just one full-time faculty member.”

Further developing a curriculum that reflects student needs is also an aim of Falcón’s.

Dean of Humanities and Social Sciences Randy Cagle said many WGS courses are taught in other departments and cross-listed, resulting in campus-wide participation.

“It’s certainly one of the more visible programs,” he said. “Because the faculty and students stress activism, there probably isn’t a student on campus who has not been a part of or has not witnessed in some degree a women’s and gender studies function.”

Cagle said he would like to see more students enrolled in the program, adding it’s great at addressing values like diversity.

Sociology and WGS sophomore Terry Starkey said his major has given him a better understanding of his privileges.

“I try not to exert that privilege any more than I already do just by existing,” he said.

Falcón said being part of a region where there are laws against transgender people and a lack of access to reproductive healthcare makes having a place where students can learn feminist activism particularly important.

“We still need this critical skill of understanding the role of women and gender in our society today,” she said.